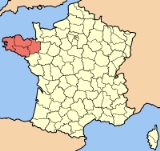 Encyclopedia
Operation Ariel was the name given to the World War II
World War II
World War II, or the Second World War , was a global conflict lasting from 1939 to 1945, involving most of the world's nations—including all of the great powers—eventually forming two opposing military alliances: the Allies and the Axis...
evacuation of Allied forces from ports in western France
France
The French Republic , The French Republic , The French Republic , (commonly known as France , is a unitary semi-presidential republic in Western Europe with several overseas territories and islands located on other continents and in the Indian, Pacific, and Atlantic oceans. Metropolitan France...
, from 15–25 June 1940, due to the military collapse in the Battle of France
Battle of France
In the Second World War, the Battle of France was the German invasion of France and the Low Countries, beginning on 10 May 1940, which ended the Phoney War. The battle consisted of two main operations. In the first, Fall Gelb , German armoured units pushed through the Ardennes, to cut off and...
against Nazi Germany
Nazi Germany
Nazi Germany , also known as the Third Reich , but officially called German Reich from 1933 to 1943 and Greater German Reich from 26 June 1943 onward, is the name commonly used to refer to the state of Germany from 1933 to 1945, when it was a totalitarian dictatorship ruled by...
. It followed Operation Dynamo
Operation Dynamo
The Dunkirk evacuation, commonly known as the Miracle of Dunkirk, code-named Operation Dynamo by the British, was the evacuation of Allied soldiers from the beaches and harbour of Dunkirk, France, between 26 May and the early hours of 3 June 1940, because the British, French and Belgian troops were...
, the evacuation from Dunkirk and Operation Cycle
Operation Cycle
During World War II, Operation Cycle was the evacuation of Allied troops from Le Havre, France at the end of the Battle of France. From 10 to 13 June 1940, 11,059 British and Allied forces were evacuated....
, the evacuation from Le Havre
Le Havre
Le Havre is a city in the Seine-Maritime department of the Haute-Normandie region in France. It is situated in north-western France, on the right bank of the mouth of the river Seine on the English Channel. Le Havre is the most populous commune in the Haute-Normandie region, although the total...
which finished on 13 June.


Evacuation from Cherbourg and St Malo

The evacuation of 52nd Division from Cherbourg was under the command of Admiral
Admiral
Admiral is the rank, or part of the name of the ranks, of the highest naval officers. It is usually considered a full admiral and above vice admiral and below admiral of the fleet . It is usually abbreviated to "Adm" or "ADM"...
William Milbourne James
William Milbourne James
Admiral Sir William Milbourne James GCB was a British Naval commander, politician and author, perhaps most notable for his activities in the Naval Intelligence Division in the First World War.-Family:...
Commander-in-Chief, Portsmouth
Commander-in-Chief, Portsmouth
The Commander-in-Chief, Portsmouth was a senior commander of the Royal Navy for hundreds of years. Portsmouth Command was a name given to the units, establishments, and staff operating under the post.-History:...
. He directed the larger troop and cargo ships to operate from Southampton
Southampton
Southampton is the largest city in the county of Hampshire on the south coast of England, and is situated south-west of London and north-west of Portsmouth. Southampton is a major port and the closest city to the New Forest...
, smaller coastal ships to use Poole
Poole
Poole is a large coastal town and seaport in the county of Dorset, on the south coast of England. The town is east of Dorchester, and Bournemouth adjoins Poole to the east. The Borough of Poole was made a unitary authority in 1997, gaining administrative independence from Dorset County Council...
and Dutch schuyts to work from Weymouth. Most of 52nd (Lowland) and 1st Armoured Divisions embarked between 15–17 June. Beauman Division
Beauman Division
Beauman Division was a Second World War improvised formation of the British Expeditionary Force, which fought in the closing phases of the Battle of France in June 1940.-Raising the division:...
and Norman Force
Norman Force
In the Battle of France in June 1940, Norman Force was a formation of units of the British Expeditionary Force, following the Dunkirk evacuation....
, which were composite formations, left on the evening of 17 June. The rearguard battalion was evacuted in the afternoon of 18 June; the first German troops were entering the outskirts of the town as the last ship sailed at 4pm. 30,360 men had been evacuated and taken to Portsmouth. At St Malo, 21,474 men, mostly of the 1st Canadian Division, got away on 17 and 18 June.

Evacuation started from Bordeaux
Bordeaux
Bordeaux is a port city on the Garonne River in the Gironde department in southwestern France.The Bordeaux-Arcachon-Libourne metropolitan area, has a population of 1,010,000 and constitutes the sixth-largest urban area in France. It is the capital of the Aquitaine region, as well as the prefecture...
on 17 June by Royal Navy cruisers and destroyers and by Allied merchant ships that were still in the harbour. British diplomatic staff and the President of Poland and his cabinet were given priority. The remainder were mainly Polish and Czech troops. Evacuation continued at the nearby ports of Le Verdon
Le Verdon-sur-Mer
Le Verdon-sur-Mer is a commune in the Gironde department in Aquitaine in southwestern France.-Population:-References:*...
and Bayonne
Bayonne
Bayonne is a city and commune in south-western France at the confluence of the Nive and Adour rivers, in the Pyrénées-Atlantiques department, of which it is a sub-prefecture...
, assisted by the troopships Batory, Sobieski
MS Sobieski
M/S Sobieski was a Polish passenger ship built for the Polish Ocena Lines to replace the aging and ; a sister ship to the MS Chrobry. She was named in honour of the Polish king Jan III Sobieski....
(both Polish), Ettrick and Arandora Star. These ships then moved on to St Jean-de-Luz where the evacuation ended at 2pm on 25 June, just after the deadline set by the terms of the Armistice. On the final day of the operation, the Canadian destroyer HMCS Fraser was rammed and sunk by the anti-aircraft cruiser HMS Calcutta in the Gironde estuary
Gironde estuary
The Gironde is a navigable estuary , in southwest France and is formed from the meeting of the rivers Dordogne and Garonne just below the centre of Bordeaux...
. Minor evacuations continued from the Mediterranean coast of France until 14 August 1940.

The number of people evacuated from France to Britain during Operation Ariel were: