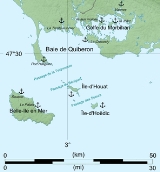 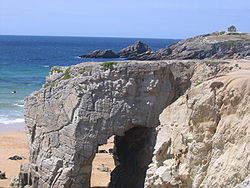 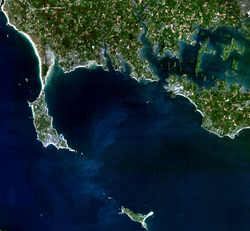 The Baie de Quiberon is an area of sheltered water on the south coast of Brittany. The bay is in the Morbihan
Morbihan
Morbihan is a department in Brittany, situated in the northwest of France. It is named after the Morbihan , the enclosed sea that is the principal feature of the coastline.-History:...
département.

The bay is roughly triangular in shape, open to the south with the Gulf of Morbihan
Gulf of Morbihan
The Gulf of Morbihan is a natural harbour on the coast of the Département of Morbihan in the south of Brittany, France. This English name is taken from the French version: le golfe du Morbihan...
to the north-east and the narrow peninsular of Presqu'île de Quiberon providing protection from the Atlantic Ocean to the west. The islands of Belle-Île, Houat
Houat
Houat is a French island off the south coast of Brittany in the department of Morbihan. It is located, along with two other major islands, in the entrance to the Baie de Quiberon. Its "twin sister" island is Hoëdic....
and Hœdic add to the bay's protection. There are many dangerous shoals at the entrance to the bay. 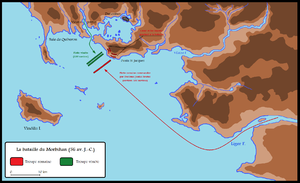 The bay has seen several important naval battles. The first recorded in history was the Battle of Morbihan in 56 BCE, between the Romans led by Decimus Junius Brutus Albinus
Decimus Junius Brutus Albinus
Decimus Junius Brutus Albinus was a Roman politician and general of the 1st century BC and one of the leading instigators of Julius Caesar's assassination...
and the local Veneti
Veneti (Gaul)
The Veneti were a seafaring Celtic people who lived in the Brittany peninsula , which in Roman times formed part of an area called Armorica...
tribe. The Romans had struggled to overcome the Veneti, who had coastal foretresses that could easily be evacuated by their powerful navy. Eventually the Romans built galleys and met the Veneti sailing fleet in Quiberon Bay. Despite being outnumbered 220 to 100 by a fleet of heavier ships, the Romans used hooks on long poles to shred the sails of the Veneti, leaving the Veneti fleet dead in the water and easily overcome.

The Battle of Quiberon Bay
Battle of Quiberon Bay
The naval Battle of Quiberon Bay took place on 20 November 1759 during the Seven Years' War in Quiberon Bay, off the coast of France near St. Nazaire...
on 20 November 1759 was one of Britain's greatest naval victories over the French. The British
United Kingdom
The United Kingdom of Great Britain and Northern IrelandIn the United Kingdom and Dependencies, other languages have been officially recognised as legitimate autochthonous languages under the European Charter for Regional or Minority Languages...
admiral Sir Edward Hawke with 23 ships of the line
Ship of the line
A ship of the line was a type of naval warship constructed from the 17th through the mid-19th century to take part in the naval tactic known as the line of battle, in which two columns of opposing warships would manoeuvre to bring the greatest weight of broadside guns to bear...
caught up with a French fleet with 21 ships of the line under Marshal de Conflans
Hubert de Brienne, Comte de Conflans
Hubert de Brienne, Comte de Conflans was a French naval commander.-Early life:The son of Henri Jacob marquis de Conflans and Marie du Bouchet, at 15 he was made a knight of the Order of Saint Lazarus and the following year entered the Gardes de la Marine school at Brest...
seeking to embark an army at Quiberon for landings in Scotland. After hard fighting, most of the French fleet were sunk, captured or forced aground. The battle was a turning point in the Seven Years War which foiled a planned invasion of Britain
Planned French Invasion of Britain (1759)
A French invasion of Great Britain was planned to take place in 1759 during the Seven Years' War, but due to various factors including naval defeats at the Battle of Lagos and the Battle of Quiberon Bay was never launched. The French planned to land 100,000 French soldiers in Britain to end British...
and broke the power of the French navy for a generation.

In 1795, the bay was the scene of an invasion by émigré
Émigré
Émigré is a French term that literally refers to a person who has "migrated out", but often carries a connotation of politico-social self-exile....
, counter-revolutionary troops in support of the Chouannerie
Chouannerie
The Chouannerie was a royalist uprising in twelve of the western departements of France, particularly in the provinces of Brittany and Maine, against the French Revolution, the First French Republic, and even, with its headquarters in London rather than France, for a time, under the Empire...
and Vendée Revolt from 23 June. It aimed to raise the whole of western France in revolt, bring an end to the French Revolution
French Revolution
The French Revolution , sometimes distinguished as the 'Great French Revolution' , was a period of radical social and political upheaval in France and Europe. The absolute monarchy that had ruled France for centuries collapsed in three years...
and restore the French monarchy. This landing of the émigrés at Quiberon was finally repulsed on 21 July, dealing a disastrous blow to the royalist cause.

In the 19th century, Nicolas Appert, a chemist, tuned a technique that permitted the sterilization
Sterilization (microbiology)
Sterilization is a term referring to any process that eliminates or kills all forms of microbial life, including transmissible agents present on a surface, contained in a fluid, in medication, or in a compound such as biological culture media...
of food. Thanks to this process, Quiberon became the leading harbour for sardine
Sardine
Sardines, or pilchards, are several types of small, oily fish related to herrings, family Clupeidae. Sardines are named after the Mediterranean island of Sardinia, around which they were once abundant....
fishing and the production of canned sardines in France.

The area has since become a tourist destination popular for yachting
Yachting
Yachting refers to recreational sailing or boating, the specific act of sailing or using other water vessels for sporting purposes.-Competitive sailing:...
, with marinas at Port Haliguen, Le Crouesty and La Trinité-sur-Mer.