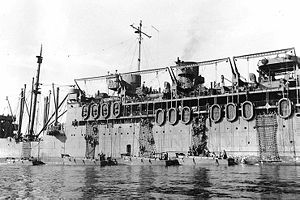 A troopship is a ship
Ship
Since the end of the age of sail a ship has been any large buoyant marine vessel. Ships are generally distinguished from boats based on size and cargo or passenger capacity. Ships are used on lakes, seas, and rivers for a variety of activities, such as the transport of people or goods, fishing,...
used to carry soldier
Soldier
A soldier is a member of the land component of national armed forces; whereas a soldier hired for service in a foreign army would be termed a mercenary...
s, either in peacetime or wartime. Operationally, troopships are normal ships, and unlike landing ships, cannot land troops directly on shore, typically loading and unloading at a seaport or onto smaller vessels, either tenders
Ship's tender
A ship's tender, usually referred to as a tender, is a boat, or a larger ship used to service a ship, generally by transporting people and/or supplies to and from shore or another ship...
or barges.

Ships to transport troops were already used in Antiquity. Thus Ancient Rome
Ancient Rome
Ancient Rome was a thriving civilization that grew on the Italian Peninsula as early as the 8th century BC. Located along the Mediterranean Sea and centered on the city of Rome, it expanded to one of the largest empires in the ancient world....
used the navis lusoria
Navis lusoria
A navis lusoria is a type of a small military vessel of the late Roman Empire that served as a troop transport. It was powered by about thirty soldier-oarsmen and an auxiliary sail. Nimble, graceful, and of shallow draft, such a vessel was used on northern rivers close to the Limes Germanicus, the...
, a small vessel powered by rowers and sail, to move soldiers on the Rhine and Danube.

The modern troopship has as long a history as passenger ship
Passenger ship
A passenger ship is a ship whose primary function is to carry passengers. The category does not include cargo vessels which have accommodations for limited numbers of passengers, such as the ubiquitous twelve-passenger freighters once common on the seas in which the transport of passengers is...
s do, as most maritime nations enlisted their support in military operations (either by leasing the vessels or by impressing them into service) when their normal naval forces were deemed insufficient for the task. In the 19th century, navies frequently chartered civilian ocean liner
Ocean liner
An ocean liner is a ship designed to transport people from one seaport to another along regular long-distance maritime routes according to a schedule. Liners may also carry cargo or mail, and may sometimes be used for other purposes .Cargo vessels running to a schedule are sometimes referred to as...
s, and from the start of the 20th century painted them gray and armed them; their speed, originally intended to minimize travel time, would prove valuable for outrunning submarine
Submarine
A submarine is a watercraft capable of independent operation below the surface of the water. It differs from a submersible, which has more limited underwater capability...
s and enemy surface cruisers. even managed to turn the tables, and rammed and sank a U-boat during one of its wartime crossings. Smaller or older liners with poorer performance were protected by operating in convoy
Convoy
A convoy is a group of vehicles, typically motor vehicles or ships, traveling together for mutual support and protection. Often, a convoy is organized with armed defensive support, though it may also be used in a non-military sense, for example when driving through remote areas.-Age of Sail:Naval...
s.

Most major naval powers in the late 19th and early 20th centuries provided subsidies toward ensuring that they would have troopships available during times of war. The British government provided subsidies to both Cunard
Cunard Line
Cunard Line is a British-American owned shipping company based at Carnival House in Southampton, England and operated by Carnival UK. It has been a leading operator of passenger ships on the North Atlantic for over a century...
and the White Star Line
White Star Line
The Oceanic Steam Navigation Company or White Star Line of Boston Packets, more commonly known as the White Star Line, was a prominent British shipping company, today most famous for its ill-fated vessel, the RMS Titanic, and the World War I loss of Titanics sister ship Britannic...
toward the construction of liners , RMS Aquitania, , RMS Britannic. When the vulnerability of these ships to return fire was realized most were used instead as troopship or hospital ship
Hospital ship
A hospital ship is a ship designated for primary function as a floating medical treatment facility or hospital; most are operated by the military forces of various countries, as they are intended to be used in or near war zones....
s.

The RMS Queen Mary
RMS Queen Mary
RMS Queen Mary is a retired ocean liner that sailed primarily in the North Atlantic Ocean from 1936 to 1967 for the Cunard Line...
and the RMS Queen Elizabeth
RMS Queen Elizabeth
RMS Queen Elizabeth was an ocean liner operated by the Cunard Line. Plying with her running mate Queen Mary as a luxury liner between Southampton, UK and New York City, USA via Cherbourg, France, she was also contracted for over twenty years to carry the Royal Mail as the second half of the two...
were two of the most famous converted liners of World War II
World War II
World War II, or the Second World War , was a global conflict lasting from 1939 to 1945, involving most of the world's nations—including all of the great powers—eventually forming two opposing military alliances: the Allies and the Axis...
. When they were fully converted, each of them could carry well over 10,000 troops per trip.

The designation HMT (His/Her Majesty's Troopship) would normally replace RMS (Royal Mail Steamship) or SS (Steamship) on ships converted to troopship duty with the Royal Navy of Great Britain. The US did not use an alternate designation, using USS as it does for any ship operated by its navy.

In the era of the Cold War
Cold War
The Cold War was the continuing state from roughly 1946 to 1991 of political conflict, military tension, proxy wars, and economic competition between the Communist World—primarily the Soviet Union and its satellite states and allies—and the powers of the Western world, primarily the United States...
the United States designed the SS United States
SS United States
SS United States is a luxury passenger liner built in 1952 for the United States Lines designed to capture the trans-Atlantic speed record....
so that it could easily be converted from a liner to a troopship, in case of war. More recently, RMS Queen Elizabeth 2
RMS Queen Elizabeth 2
Queen Elizabeth 2, often referred to simply as the QE2, is an ocean liner that was operated by Cunard from 1969 to 2008. Following her retirement from cruising, she is now owned by Istithmar...
and the were requisitioned by the Royal Navy to carry British soldiers to the Falklands War
Falklands War
The Falklands War , also called the Falklands Conflict or Falklands Crisis, was fought in 1982 between Argentina and the United Kingdom over the disputed Falkland Islands and South Georgia and the South Sandwich Islands...
. By the end of the twentieth century, nearly all long-distance transfers of soldiers were being done by air in military transport aircraft
Military transport aircraft
Military transport aircraft are typically fixed and rotary wing cargo aircraft which are used to deliver troops, weapons and other military equipment by a variety of methods to any area of military operations around the surface of the planet, usually outside of the commercial flight routes in...
.