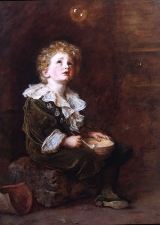 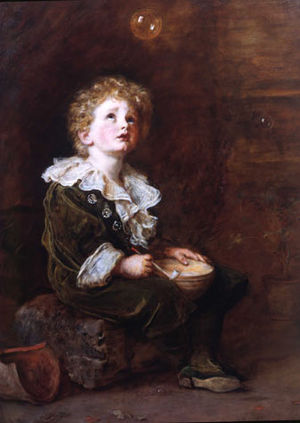 As a child, James sat as a subject for several paintings by his grandfather, Millais. The most well-known of these is Bubbles
Bubbles (painting)
Bubbles, originally titled A Child's World, is a painting by Sir John Everett Millais that became famous when it was used over many generations in advertisements for Pears soap...
, in which the five year old William is shown gazing enraptured at a bubble he has just blown. When the painting was used in an advertisement for Pears soap
Pears soap
Pears transparent soap is a brand of soap first produced and sold in 1789 by Andrew Pears at a factory just off Oxford Street in London, England. It was the world's first transparent soap. Under the stewardship of Thomas J. Barratt, A. & F. Pears Ltd. company initiated a number of innovations in...
, it became famous. The image dogged James throughout his life, and he was regularly nicknamed "Bubbles".

James pursued a career in the Navy, rising to hold a number of important positions. Following his service on the training ship HMS Britannia, he was promoted to sub-lieutenant
Sub-Lieutenant
Sub-lieutenant is a military rank. It is normally a junior officer rank.In many navies, a sub-lieutenant is a naval commissioned or subordinate officer, ranking below a lieutenant. In the Royal Navy the rank of sub-lieutenant is equivalent to the rank of lieutenant in the British Army and of...
in 1901 and lieutenant
Lieutenant
A lieutenant is a junior commissioned officer in many nations' armed forces. Typically, the rank of lieutenant in naval usage, while still a junior officer rank, is senior to the army rank...
in 1902. He achieved the rank of commander
Commander
Commander is a naval rank which is also sometimes used as a military title depending on the individual customs of a given military service. Commander is also used as a rank or title in some organizations outside of the armed forces, particularly in police and law enforcement.-Commander as a naval...
in 1913. He served as executive officer
Executive officer
An executive officer is generally a person responsible for running an organization, although the exact nature of the role varies depending on the organization.-Administrative law:...
aboard the battlecruiser HMS Queen Mary
HMS Queen Mary
HMS Queen Mary was a battlecruiser built by the British Royal Navy before World War I, the sole member of her class. She was similar to the s, though she differed in details from her half-sisters. She was the last battlecruiser completed before the war and participated in the Battle of Heligoland...
.

During the First World War he was flag-commander to Vice Admiral Sir Frederick Doveton Sturdee
Doveton Sturdee
Admiral of the Fleet Sir Frederick Charles Doveton Sturdee, 1st Baronet, GCB, KCMG, CVO was a British admiral.-Naval career:...
, commanding the 4th Battle Squadron of the Grand Fleet in HMS Benbow
HMS Benbow (1913)
HMS Benbow was an Iron Duke-class battleship of the Royal Navy, the third ship of the class and the third ship to be named in honour of Admiral John Benbow....
from 1916 to 1917. Later in the war he assisted William Reginald Hall
William Reginald Hall
Admiral Sir William Reginald Hall, KCMG, CB, RN was the British Director of Naval Intelligence from 1914 to 1919...
, the Director of Naval Intelligence, eventually becoming deputy director. Hall and James worked together in "Room 40
Room 40
In the history of Cryptanalysis, Room 40 was the section in the Admiralty most identified with the British cryptoanalysis effort during the First World War.Room 40 was formed in October 1914, shortly after the start of the war...
" which decrypted a number of crucial enemy signals relating to the Battle of Jutland
Battle of Jutland
The Battle of Jutland was a naval battle between the British Royal Navy's Grand Fleet and the Imperial German Navy's High Seas Fleet during the First World War. The battle was fought on 31 May and 1 June 1916 in the North Sea near Jutland, Denmark. It was the largest naval battle and the only...
, the plans of Roger Casement
Roger Casement
Roger David Casement —Sir Roger Casement CMG between 1911 and shortly before his execution for treason, when he was stripped of his British honours—was an Irish patriot, poet, revolutionary, and nationalist....
and the Zimmerman Telegram. At one point James ran Room 40 on Hall's behalf. James related some of the events in his biography of Hall, published in 1955.

In the inter-war years, James first served in the China Station
China Station
The China Station was a historical formation of the British Royal Navy. It was formally the units and establishments responsible to the Commander-in-Chief, China....
as commander of HMS Curlew
HMS Curlew (D42)
HMS Curlew was a C-class light cruiser of the British Royal Navy. She was part of the Ceres group of the C class of cruisers.She was laid down by Vickers Limited on 21 August 1916, and launched on 5 July 1917, being commissioned into the navy on 14 December 1917. In common with most of her...
and local chief of staff from 1921 to 1922. From 1923, he was Deputy Director at the Royal Naval College, Greenwich and Director in 1925. In 1926 he returned as flag captain
Flag captain
In the Royal Navy, a flag captain was the captain of an admiral's flagship. During the 18th and 19th centuries, this ship might also have a "captain of the fleet", who would be ranked between the admiral and the "flag captain" as the ship's "First Captain", with the "flag captain" as the ship's...
of HMS Royal Sovereign
HMS Royal Sovereign (05)
HMS Royal Sovereign was a Revenge-class battleship of the Royal Navy displacing and armed with eight guns in four twin turrets...
. He went on to be Naval Assistant to the First Sea Lord
First Sea Lord
The First Sea Lord is the professional head of the Royal Navy and the whole Naval Service; it was formerly known as First Naval Lord. He also holds the title of Chief of Naval Staff, and is known by the abbreviations 1SL/CNS...
in 1927, Chief of Staff to the Commander-in-Chief, Atlantic Fleet in 1929 and Chief of Staff to the Commander-in-Chief, Mediterranean Fleet in 1930.

In 1932 he took command of the Battlecruiser Squadron, which he controlled from HMS Hood
HMS Hood (51)
HMS Hood was the last battlecruiser built for the Royal Navy. One of four s ordered in mid-1916, her design—although drastically revised after the Battle of Jutland and improved while she was under construction—still had serious limitations. For this reason she was the only ship of her class to be...
. He was made Vice Admiral
Vice Admiral
Vice admiral is a senior naval rank of a three-star flag officer, which is equivalent to lieutenant general in the other uniformed services. A vice admiral is typically senior to a rear admiral and junior to an admiral...
in 1933 and from 1935 to 1938 he was Deputy Chief of the Naval Staff and a Lord Commissioner of the Admiralty
Lord Commissioner of the Admiralty
The Lords Commissioners of the Admiralty were the members of the Board of Admiralty, which exercised command over the Royal Navy.Officially known as the Commissioners for Exercising the Office of Lord High Admiral of the United Kingdom of Great Britain and Northern Ireland &c. The Lords...
. He was honoured with a KCB
Order of the Bath
The Most Honourable Order of the Bath is a British order of chivalry founded by George I on 18 May 1725. The name derives from the elaborate mediæval ceremony for creating a knight, which involved bathing as one of its elements. The knights so created were known as Knights of the Bath...
.

From 1938 James was a full Admiral
Admiral (United Kingdom)
Admiral is a senior rank of the Royal Navy of the United Kingdom, which equates to the NATO rank code OF-9, outranked only by the rank Admiral of the Fleet...
.

During World War II
World War II
World War II, or the Second World War , was a global conflict lasting from 1939 to 1945, involving most of the world's nations—including all of the great powers—eventually forming two opposing military alliances: the Allies and the Axis...
James served as Commander-in-Chief, Portsmouth
Commander-in-Chief, Portsmouth
The Commander-in-Chief, Portsmouth was a senior commander of the Royal Navy for hundreds of years. Portsmouth Command was a name given to the units, establishments, and staff operating under the post.-History:...
from 1939. In 1940 he commanded Operation Ariel
Operation Ariel
Operation Ariel was the name given to the World War II evacuation of Allied forces from ports in western France, from 15–25 June 1940, due to the military collapse in the Battle of France against Nazi Germany...
, the evacuation of British troops from Brittany
Brittany
Brittany is a cultural and administrative region in the north-west of France. Previously a kingdom and then a duchy, Brittany was united to the Kingdom of France in 1532 as a province. Brittany has also been referred to as Less, Lesser or Little Britain...
and Normandy
Normandy
Normandy is a geographical region corresponding to the former Duchy of Normandy. It is in France.The continental territory covers 30,627 km² and forms the preponderant part of Normandy and roughly 5% of the territory of France. It is divided for administrative purposes into two régions:...
, a parallel operation to the Dunkirk evacuation. In 1942 he was appointed as Chief of Naval Information, in charge of coordinating naval publicity.

Following his retirement from public life, James was active in support for ventures relating to seafaring, supporting clubs such as the Elie and Earlsferry Sailing Club, which named their dinghy Bubbles in his honour. Most of his retirement was dedicated to his writings on aspects of British naval history.

In addition to his biography of Hall, he published books and articles on other aspects of his wartime experiences, including an account of Winston Churchill
Winston Churchill
Sir Winston Leonard Spencer-Churchill, was a predominantly Conservative British politician and statesman known for his leadership of the United Kingdom during the Second World War. He is widely regarded as one of the greatest wartime leaders of the century and served as Prime Minister twice...
's attitudes to naval affairs in Churchill by His Contemporaries. Other publications on naval matters included:

The British Navy in adversity: a study of the American War of Independence (1926)

The British Navies in the Second World War (1946)

The eyes of the navy: a biographical study of Admiral Sir Reginald Hall (1955)

A great seaman: the life of Admiral of the Fleet Sir Henry Oliver (1956)

His most notable non-Naval publication was The Order of Release, the story of John Ruskin, Effie Gray and John Everett Millais told for the first time in their unpublished letters (1947), a collection of family letters detailing the romance between his grandparents. His grandmother Effie Gray
Effie Gray
Euphemia Chalmers Millais, Lady Millais née Gray, known as Effie Gray, Effie Ruskin or Effie Millais was the wife of the critic John Ruskin, but left her husband without the marriage being consummated, and after the annulment of the marriage, married his protégé, the Pre-Raphaelite painter John...
had been married to John Ruskin
John Ruskin
John Ruskin was the leading English art critic of the Victorian era, also an art patron, draughtsman, watercolourist, a prominent social thinker and philanthropist. He wrote on subjects ranging from geology to architecture, myth to ornithology, literature to education, and botany to political...
when she fell in love with Millais
John Everett Millais
Sir John Everett Millais, 1st Baronet, PRA was an English painter and illustrator and one of the founders of the Pre-Raphaelite Brotherhood.-Early life:...
. Her first marriage was annulled, due to non-consummation. James was the first to publish the full details of these events and to vindicate his grandmother, whose victimisation by the Ruskin family he documented. James's book has been the inspiration for at least two plays.