Encyclopedia
Onyx is a banded variety of chalcedony
Chalcedony
Chalcedony is a cryptocrystalline form of silica, composed of very fine intergrowths of the minerals quartz and moganite. These are both silica minerals, but they differ in that quartz has a trigonal crystal structure, while moganite is monoclinic...
. The colors of its bands range from white to almost every color (save some shades, such as purple or blue). Commonly, specimens of onyx contain bands of black and/or white.

Onyx comes through Latin (of the same spelling), from the Greek ὄνυξ, meaning 'claw' or 'fingernail'. With its fleshtone color, onyx can be said to resemble a fingernail. The English word 'nail' is cognate
Cognate
In linguistics, cognates are words that have a common etymological origin. This learned term derives from the Latin cognatus . Cognates within the same language are called doublets. Strictly speaking, loanwords from another language are usually not meant by the term, e.g...
with the Greek word.

Onyx is formed of bands of chalcedony
Chalcedony
Chalcedony is a cryptocrystalline form of silica, composed of very fine intergrowths of the minerals quartz and moganite. These are both silica minerals, but they differ in that quartz has a trigonal crystal structure, while moganite is monoclinic...
in alternating colors. It is cryptocrystalline
Cryptocrystalline
Cryptocrystalline is a rock texture made up of such minute crystals that its crystalline nature is only vaguely revealed even microscopically in thin section by transmitted polarized light. Among the sedimentary rocks, chert and flint are cryptocrystalline. Carbonado, a form of diamond, is also...
, consisting of fine intergrowths of the silica minerals quartz
Quartz
Quartz is the second-most-abundant mineral in the Earth's continental crust, after feldspar. It is made up of a continuous framework of SiO4 silicon–oxygen tetrahedra, with each oxygen being shared between two tetrahedra, giving an overall formula SiO2. There are many different varieties of quartz,...
and moganite
Moganite
Moganite is a silicate mineral with the chemical formula SiO2 that was discovered in 1984. It crystallises in the monoclinic crystal system...
. Its bands are parallel to one another, as opposed to the more chaotic banding that often occurs in agate
Agate
Agate is a microcrystalline variety of silica, chiefly chalcedony, characterised by its fineness of grain and brightness of color. Although agates may be found in various kinds of rock, they are classically associated with volcanic rocks and can be common in certain metamorphic rocks.-Etymology...
s.

Sardonyx is a variant in which the colored bands are sard (shades of red) rather than black. Black onyx is perhaps the most famous variety, but is not as common as onyx with colored bands. Artificial treatments have been used since ancient times to produce both the black color in "black onyx" and the reds and yellows in sardonyx. Most "black onyx" on the market is artificially colored.

Onyx also comes in a greenish-white color and has obvious layers, though they do not alternate colors and are not perfectly parallel. It is translucent and almost "soft" in texture.

The name has sometimes been used, incorrectly, to label other banded lapidary
Lapidary
A lapidary is an artist or artisan who forms stone, mineral, gemstones, and other suitably durable materials into decorative items such as engraved gems, including cameos, or cabochons, and faceted designs...
materials, such as banded calcite
Calcite
Calcite is a carbonate mineral and the most stable polymorph of calcium carbonate . The other polymorphs are the minerals aragonite and vaterite. Aragonite will change to calcite at 380-470°C, and vaterite is even less stable.-Properties:...
found in Mexico
Mexico
The United Mexican States , commonly known as Mexico , is a federal constitutional republic in North America. It is bordered on the north by the United States; on the south and west by the Pacific Ocean; on the southeast by Guatemala, Belize, and the Caribbean Sea; and on the east by the Gulf of...
, Pakistan
Pakistan
Pakistan , officially the Islamic Republic of Pakistan is a sovereign state in South Asia. It has a coastline along the Arabian Sea and the Gulf of Oman in the south and is bordered by Afghanistan and Iran in the west, India in the east and China in the far northeast. In the north, Tajikistan...
, and other places, and often carved, polished and sold. This material is much softer than true onyx, and much more readily available. The majority of carved items sold as "onyx" today are this carbonate
Carbonate
In chemistry, a carbonate is a salt of carbonic acid, characterized by the presence of the carbonate ion, . The name may also mean an ester of carbonic acid, an organic compound containing the carbonate group C2....
material.

Artificial onyx types have also been produced from common chalcedony and plain agates. The first-century naturalist Pliny the Elder
Pliny the Elder
Gaius Plinius Secundus , better known as Pliny the Elder, was a Roman author, naturalist, and natural philosopher, as well as naval and army commander of the early Roman Empire, and personal friend of the emperor Vespasian...
described these techniques being used in Roman times. Treatments for producing black and other colors include soaking or boiling chalcedony
Chalcedony
Chalcedony is a cryptocrystalline form of silica, composed of very fine intergrowths of the minerals quartz and moganite. These are both silica minerals, but they differ in that quartz has a trigonal crystal structure, while moganite is monoclinic...
in sugar solutions, then treating with sulfuric
Sulfuric acid
Sulfuric acid is a strong mineral acid with the molecular formula . Its historical name is oil of vitriol. Pure sulfuric acid is a highly corrosive, colorless, viscous liquid. The salts of sulfuric acid are called sulfates...
or hydrochloric acid
Hydrochloric acid
Hydrochloric acid is a solution of hydrogen chloride in water, that is a highly corrosive, strong mineral acid with many industrial uses. It is found naturally in gastric acid....
to carbonize sugars which had been absorbed into the top layers of the stone. These techniques are still used, as well as other dyeing treatments, and most so-called "black onyx" sold is artificially treated. In addition to dye treatments, heating and treatment with nitric acid
Nitric acid
Nitric acid , also known as aqua fortis and spirit of nitre, is a highly corrosive and toxic strong acid.Colorless when pure, older samples tend to acquire a yellow cast due to the accumulation of oxides of nitrogen. If the solution contains more than 86% nitric acid, it is referred to as fuming...
have been used to lighten or eliminate undesirable colors. 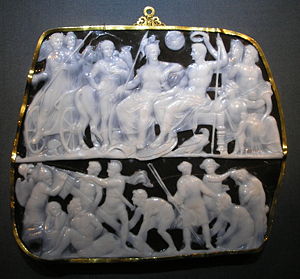 It has a long history of use for hardstone carving
Hardstone carving
Hardstone carving is a general term in art history and archaeology for the carving for artistic purposes of semi-precious stones, also known as gemstones, such as jade, rock crystal , agate, onyx, jasper, serpentine or carnelian, and for an object made in this way. Normally the objects are small,...
and jewellery
Jewellery
Jewellery or jewelry is a form of personal adornment, such as brooches, rings, necklaces, earrings, and bracelets.With some exceptions, such as medical alert bracelets or military dog tags, jewellery normally differs from other items of personal adornment in that it has no other purpose than to...
, where it is usually cut as a cabochon
Cabochon
A cabochon , from the Middle French caboche , is a gemstone which has been shaped and polished as opposed to faceted. The resulting form is usually a convex top with a flat bottom. Cutting en cabochon is usually applied to opaque gems, while faceting is usually applied to transparent stones...
or into beads. It has also been used for intaglio and hardstone cameo engraved gems, where the bands make the image contrast with the ground. Some onyx is natural but much of the material in commerce is produced by the staining of agate
Agate
Agate is a microcrystalline variety of silica, chiefly chalcedony, characterised by its fineness of grain and brightness of color. Although agates may be found in various kinds of rock, they are classically associated with volcanic rocks and can be common in certain metamorphic rocks.-Etymology...
.

Onyx was used in Egypt
Egypt
Egypt , officially the Arab Republic of Egypt, Arabic: , is a country mainly in North Africa, with the Sinai Peninsula forming a land bridge in Southwest Asia. Egypt is thus a transcontinental country, and a major power in Africa, the Mediterranean Basin, the Middle East and the Muslim world...
as early as the Second Dynasty to make bowls and other pottery items. Use of sardonyx appears in the art of Minoan
Minoan civilization
The Minoan civilization was a Bronze Age civilization that arose on the island of Crete and flourished from approximately the 27th century BC to the 15th century BC. It was rediscovered at the beginning of the 20th century through the work of the British archaeologist Arthur Evans...
Crete
Crete
Crete is the largest and most populous of the Greek islands, the fifth largest island in the Mediterranean Sea, and one of the thirteen administrative regions of Greece. It forms a significant part of the economy and cultural heritage of Greece while retaining its own local cultural traits...
, notably from the archaeological recoveries at Knossos
Knossos
Knossos , also known as Labyrinth, or Knossos Palace, is the largest Bronze Age archaeological site on Crete and probably the ceremonial and political centre of the Minoan civilization and culture. The palace appears as a maze of workrooms, living spaces, and store rooms close to a central square...
. Onyx is also mentioned in the Bible at various points, such as in Genesis 2:12 "and the gold of that land is good: there is bdellium
Bdellium
Bdellium is an aromatic gum like myrrh that is exuded from a tree. A medieval Arab writer first made the identification with gum guggul, the species Commiphora wightii, although "bdellium" has also been used to identify the African species C. africana and at least one other Indian species, C....
and the onyx stone", and such as the priests' garments and the foundation of the city of Heaven in Revelation.

Onyx was known to the Ancient Greek
Ancient Greek
Ancient Greek is the stage of the Greek language in the periods spanning the times c. 9th–6th centuries BC, , c. 5th–4th centuries BC , and the c. 3rd century BC – 6th century AD of ancient Greece and the ancient world; being predated in the 2nd millennium BC by Mycenaean Greek...
s and Romans
Ancient Rome
Ancient Rome was a thriving civilization that grew on the Italian Peninsula as early as the 8th century BC. Located along the Mediterranean Sea and centered on the city of Rome, it expanded to one of the largest empires in the ancient world....
. The first-century naturalist Pliny the Elder
Pliny the Elder
Gaius Plinius Secundus , better known as Pliny the Elder, was a Roman author, naturalist, and natural philosopher, as well as naval and army commander of the early Roman Empire, and personal friend of the emperor Vespasian...
described both type of onyx and various artificial treatment techniques in his Naturalis Historia.
The source of this article is wikipedia, the free encyclopedia.  The text of this article is licensed under the GFDL.