North West is a province of South Africa
Provinces of South Africa
South Africa is currently divided into nine provinces. On the eve of the 1994 general election, South Africa's former homelands, also known as Bantustans, were reintegrated and the four existing provinces were divided into nine. The twelfth, thirteenth and sixteenth amendments to the constitution...
. Its capital is Mafikeng
Mafikeng
Mahikeng – formerly legally, but still commonly known as Mafikeng – is the capital city of the North-West Province of South Africa. It is best known internationally for the Siege of Mafeking, the most famous engagement of the Second Boer War.Located on South Africa's border with Botswana, it is ...
. The province is located to the west of the major population centre of Gauteng
Gauteng
Gauteng is one of the nine provinces of South Africa. It was formed from part of the old Transvaal Province after South Africa's first all-race elections on 27 April 1994...
.

The provincial government consists of a premier, an executive council of ten ministers, and a legislature. The provincial assembly and premier are elected for five-year terms, or until the next national election. Political parties are awarded assembly seats based on the percentage of votes each party receives in the province during the national elections. The assembly elects a premier, who then appoints the members of the executive council.

Much of the province consists of flat areas of scattered trees and grassland. The Magaliesberg
Magaliesberg
The Magaliesberg is a mountain range extending from Pretoria in the north of the Gauteng Province to a point south of Pilanesberg, in the North West Province, South Africa...
mountain range in the northeast extends about 130 km (about 80 miles) from Pretoria
Pretoria
Pretoria is a city located in the northern part of Gauteng Province, South Africa. It is one of the country's three capital cities, serving as the executive and de facto national capital; the others are Cape Town, the legislative capital, and Bloemfontein, the judicial capital.Pretoria is...
to Rustenburg
Rustenburg, North West
Rustenburg |Dutch]]: Town of Rest) is a city and a local municipality of 395,539 inhabitants situated at the foot of the Magaliesberg mountain range in North West Province of South Africa...
. The Vaal River
Vaal River
The Vaal River is the largest tributary of the Orange River in South Africa. The river has its source in the Drakensberg mountains in Mpumalanga, east of Johannesburg and about 30 km north of Ermelo and only about 240 km from the Indian Ocean. It then flows westwards to its conjunction...
flows along the southern border of the province.

North West borders the following districts
Districts of Botswana
||Botswana is divided into 16 administrative districts: 10 rural districts and 6 urban districts. These are administered by 16 local authorities...
of Botswana
Botswana
Botswana, officially the Republic of Botswana , is a landlocked country located in Southern Africa. The citizens are referred to as "Batswana" . Formerly the British protectorate of Bechuanaland, Botswana adopted its new name after becoming independent within the Commonwealth on 30 September 1966...
:
Domestically, it borders the following provinces:

North West Province is traversed by the northwesterly line of equal latitude and longitude. 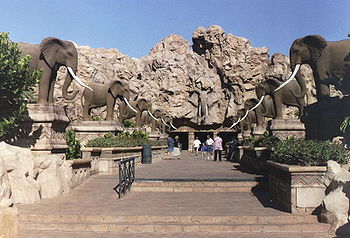 The majority of the province's residents are the Tswana people who speak Setswana. Smaller groups include Afrikaans
Afrikaans
Afrikaans is a West Germanic language, spoken natively in South Africa and Namibia. It is a daughter language of Dutch, originating in its 17th century dialects, collectively referred to as Cape Dutch .Afrikaans is a daughter language of Dutch; see , , , , , .Afrikaans was historically called Cape...
, Sotho, and Xhosa speaking people. English is spoken primarily as a second language. Most of the population belong to Christian denominations. (Figures according to Census 2001 released in July 2003).

The province has the lowest number of people aged 20 years and older (5,9%) who have received higher education. The literacy rate is in the region of 57%.

The province has two universities: the University of North West, which was formerly called the University of Bophuthatswana (founded in 1979), in Mmabatho
Mmabatho
Mmabatho is the former capital of the North-West Province of South Africa. In the apartheid era, it was the capital of the former "Bantustan" of Bophuthatswana. Following the end of apartheid in 1994, Bophuthatswana was integrated into the newly established North-West Province and Mmabatho was...
; and Potchefstroom University for Christian Higher Education
Potchefstroom University for Christian Higher Education
The Potchefstroom University for Christian Higher Education was a medium-sized South African university located in Potchefstroom. Tuition was mainly in Afrikaans...
(founded in 1869; became a constituent college of the University of South Africa in 1921 and an independent university in 1951). These universities have now merged with the University of North West as name.
There is also a private university found in Klerksdorp: Centurion Akademie Klerksdorp, which cater mainly to Afrikaans students. Because it its a private institution classes may be in Afrikaans and the foundation of education gained at Centurion Akademie is based on the Christian faith. It is also the largest institution of its kind in existence.
As part of the Department of Education's proposed plans for higher education, the existing four higher learning institutions will be merged to form two. During 2003, as part of the Year of Further Education and Training project, three mega institutions, Taletso, ORBIT and Vuselela, were established to provide technical and vocational training to the youth. These institutions have been incorporated into many of the former education and technical colleges and manpower centres.