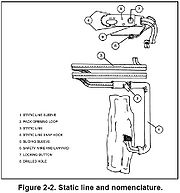 A static line is a fixed cord attached to a large, stable object. It is used for safety in construction
Workplace safety
Workplace safety & health is a category of management responsibility in places of employment.To ensure the safety and health of workers, managers establish a focus on safety that can include elements such as:* management leadership and commitment...
and
to open parachutes automatically for paratroopers and novice parachutists
Parachuting
Parachuting, also known as skydiving, is the action of exiting an aircraft and returning to earth with the aid of a parachute. It may or may not involve a certain amount of free-fall, a time during which the parachute has not been deployed and the body gradually accelerates to terminal...
.

The parachutist must adopt and maintain a suitable body position throughout deployment to minimise the chances of a parachute malfunction. This method of parachute deployment is commonly used in several ways:

Static line jumping carries risk of injury that, according to one study, doubles when performed in combat.

For training students in civilian operations, modifications to existing static line equipment may be made to simplify operations. One such modification is to attach the deployment bag to the parachute instead of the static line, which also requires some modification to allow the static line to detach, typically a Velcro
Velcro
Velcro is the brand name of the first commercially marketed fabric hook-and-loop fastener, invented in 1948 by the Swiss electrical engineer George de Mestral...
fastener. This leaves much less material "in the wind" behind the plane after the jumper has left; this isn't a problem for larger cargo aircraft
Cargo aircraft
A cargo aircraft is a fixed-wing aircraft designed or converted for the carriage of goods, rather than passengers. They are usually devoid of passenger amenities, and generally feature one or more large doors for the loading and unloading of cargo...
used in military jumping, but presents a major issue for smaller aircraft used in civilian operations. This modification also results in a somewhat slower opening, which softens the opening shock at the cost of altitude, a minor concern for jumpers exiting at 2800 ft (853.4 m).

In construction, a static line is a safety measure consisting of a cable race fixed to a roof
Roof
A roof is the covering on the uppermost part of a building. A roof protects the building and its contents from the effects of weather. Structures that require roofs range from a letter box to a cathedral or stadium, dwellings being the most numerous....
at intervals to which a safety harness
Safety harness
A safety harness is a form of protective equipment designed to protect a person, animal, or object from injury or damage. The harness is an attachment between a stationary and non-stationary object and is usually fabricated from rope, cable or webbing and locking hardware...
may be tethered.