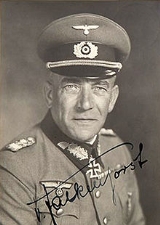 Encyclopedia
Nikolaus von Falkenhorst (January 17, 1885 – June 18, 1968) was a German
Germany
Germany , officially the Federal Republic of Germany , is a federal parliamentary republic in Europe. The country consists of 16 states while the capital and largest city is Berlin. Germany covers an area of 357,021 km2 and has a largely temperate seasonal climate...
General
General
A general officer is an officer of high military rank, usually in the army, and in some nations, the air force. The term is widely used by many nations of the world, and when a country uses a different term, there is an equivalent title given....
who planned Operation Weserübung
Operation Weserübung
Operation Weserübung was the code name for Germany's assault on Denmark and Norway during the Second World War and the opening operation of the Norwegian Campaign...
, the invasion of Denmark
Denmark
Denmark is a Scandinavian country in Northern Europe. The countries of Denmark and Greenland, as well as the Faroe Islands, constitute the Kingdom of Denmark . It is the southernmost of the Nordic countries, southwest of Sweden and south of Norway, and bordered to the south by Germany. Denmark...
and Norway
Norway
Norway , officially the Kingdom of Norway, is a Nordic unitary constitutional monarchy whose territory comprises the western portion of the Scandinavian Peninsula, Jan Mayen, and the Arctic archipelago of Svalbard and Bouvet Island. Norway has a total area of and a population of about 4.9 million...
in 1940. After the invasion he became Commander of the German troops in Norway between 1940 and 1944.

Falkenhorst was born in Breslau into an old Silesia
Silesia
Silesia is a historical region of Central Europe located mostly in Poland, with smaller parts also in the Czech Republic, and Germany.Silesia is rich in mineral and natural resources, and includes several important industrial areas. Silesia's largest city and historical capital is Wrocław...
n military family, the Jastrzembski; he changed this Polish
Poland
Poland , officially the Republic of Poland , is a country in Central Europe bordered by Germany to the west; the Czech Republic and Slovakia to the south; Ukraine, Belarus and Lithuania to the east; and the Baltic Sea and Kaliningrad Oblast, a Russian exclave, to the north...
name to the German Falkenhorst ("falcon's eyrie") early in his career. He joined the German army
German Army (German Empire)
The German Army was the name given the combined land forces of the German Empire, also known as the National Army , Imperial Army or Imperial German Army. The term "Deutsches Heer" is also used for the modern German Army, the land component of the German Bundeswehr...
in 1907 and during World War I
World War I
World War I , which was predominantly called the World War or the Great War from its occurrence until 1939, and the First World War or World War I thereafter, was a major war centred in Europe that began on 28 July 1914 and lasted until 11 November 1918...
was given various regimental and staff appointments. As a member of the Freikorps
Freikorps
Freikorps are German volunteer military or paramilitary units. The term was originally applied to voluntary armies formed in German lands from the middle of the 18th century onwards. Between World War I and World War II the term was also used for the paramilitary organizations that arose during...
in 1919, he was transferred to the Reichswehr
Reichswehr
The Reichswehr formed the military organisation of Germany from 1919 until 1935, when it was renamed the Wehrmacht ....
, and between 1925 and 1927 served in the Operations Division of the War Ministry.

Falkenhorst was promoted to Colonel on October 1, 1932, and was then military attaché in the German embassies in Prague
Prague
Prague is the capital and largest city of the Czech Republic. Situated in the north-west of the country on the Vltava river, the city is home to about 1.3 million people, while its metropolitan area is estimated to have a population of over 2.3 million...
, Belgrade
Belgrade
Belgrade is the capital and largest city of Serbia. It is located at the confluence of the Sava and Danube rivers, where the Pannonian Plain meets the Balkans. According to official results of Census 2011, the city has a population of 1,639,121. It is one of the 15 largest cities in Europe...
and Bucharest
Bucharest
Bucharest is the capital municipality, cultural, industrial, and financial centre of Romania. It is the largest city in Romania, located in the southeast of the country, at , and lies on the banks of the Dâmbovița River....
between 1933 and 1935. On July 1, 1935, he was promoted to Generalmajor and Chief of Staff of the Third Army and in 1937 to Generalleutnant. In 1939 he commanded the Twenty First Army Corps during the Invasion of Poland
Invasion of Poland (1939)
The Invasion of Poland, also known as the September Campaign or 1939 Defensive War in Poland and the Poland Campaign in Germany, was an invasion of Poland by Germany, the Soviet Union, and a small Slovak contingent that marked the start of World War II in Europe...
, and was promoted to General der Infanterie.

On February 20, 1940, Hitler informed Falkenhorst that he would shortly command a highly secret operation, the invasion of Norway Operation Weserübung
Operation Weserübung
Operation Weserübung was the code name for Germany's assault on Denmark and Norway during the Second World War and the opening operation of the Norwegian Campaign...
, and gave him until 5 p.m. the same day to come up with his basic plan. With no time to consult military charts or maps, Falkenhorst picked up a Baedeker tourist guidebook of Norway at a stationery store on his way to his hotel room, where he planned the operation from maps he found in that book. Hitler promptly approved his plan, and the daring operation was successful. The only major German loss during the operation was the sinking of the heavy cruiser Blücher
German cruiser Blücher
Blücher was the second of five heavy cruisers of the German Kriegsmarine, built after the rise of the Nazi Party and the repudiation of the Treaty of Versailles. Named for Gebhard Leberecht von Blücher, the victor of the Battle of Waterloo, the ship was laid down in August 1936 and launched in...
in the Oslofjord
Oslofjord
The Oslofjord is a bay in the south-east of Norway, stretching from an imaginary line between the Torbjørnskjær and Færder lighthouses and down to Langesund in the south to Oslo in the north....
.

After planning the invasion of Norway and repulsing a counter-invasion by British
United Kingdom
The United Kingdom of Great Britain and Northern IrelandIn the United Kingdom and Dependencies, other languages have been officially recognised as legitimate autochthonous languages under the European Charter for Regional or Minority Languages...
forces from the north, Falkenhorst remained in charge of the Norwegian garrison. In contrast to the civilian administration, the military forces aimed to form an understanding with the Norwegian people, and Falkenhorst ordered his men to treat them with courtesy. An apocryphal story, which was much believed by both sides, told of a Norwegian woman who complained that a German soldier had stolen some of her jam. The next morning, she was invited to come to the local army post to see the man shot by firing squad.

In December 1942, he planed the operation Polarfuchs, the invasion of Sweden by 10 German divisions. He thought the invasion would have taken 10 days.

Falkenhorst was dismissed from his command on December 18, 1944, for opposing the policies of Josef Terboven
Josef Terboven
Josef Antonius Heinrich Terboven was a Nazi leader, best known as the Reichskommissar during the German occupation of Norway.-Early life:...
, the Reich Commissioner
Reichskommissar
Reichskommissar , in German history, was an official gubernatorial title used for various public offices during the period of the German Empire and the Nazi Third Reich....
for Norway. After the war, Falkenhorst was tried by a joint British-Norwegian military tribunal for violating the rules of war. He had passed on the Führerbefehl known as the Commando Order
Commando Order
The Commando Order was issued by Adolf Hitler on 18 October 1942 stating that all Allied commandos encountered by German forces in Europe and Africa should be killed immediately, even if in uniform or if they attempted to surrender...
which required captured saboteurs to be shot (several were), and was therefore convicted and sentenced to death in 1946. The sentence was later commuted to twenty years' imprisonment, after successful appeal by Sven Hedin
Sven Hedin
Sven Anders Hedin KNO1kl RVO was a Swedish geographer, topographer, explorer, photographer, and travel writer, as well as an illustrator of his own works...
.

Falkenhorst was released from Werl prison
Werl Prison
Werl Prison has about 900 inmates, and is one of the largest prisons in Germany. It is located in the town of Werl in the state of North Rhine-Westphalia, east of Dortmund.After World War II, several high-ranking Nazi officials were imprisoned there....
on July 23, 1953, due to bad health. He died in Holzminden
Holzminden
Holzminden is a town in southern Lower Saxony, Germany. It is the capital of the district of Holzminden. It is located directly on the river Weser, which here is the border to North Rhine-Westphalia.-History:...
in 1968. His daughter was married to General Erich Dethleffsen
Erich Dethleffsen
Erich Dethleffsen was a German general from Kiel. He was married to a daughter of Nikolaus von Falkenhorst, who planned the German invasion of Norway and Denmark during World War II....
.