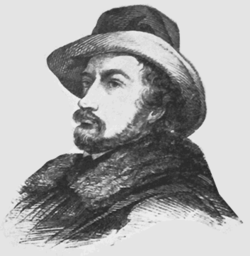 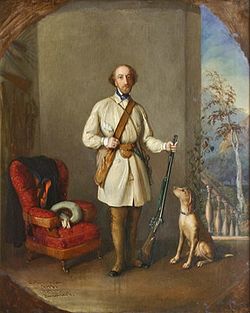 Nicolae Golescu was a Wallachia
Wallachia
Wallachia or Walachia is a historical and geographical region of Romania. It is situated north of the Danube and south of the Southern Carpathians...
n Romania
Romania
Romania is a country located at the crossroads of Central and Southeastern Europe, on the Lower Danube, within and outside the Carpathian arch, bordering on the Black Sea...
n politician who served as the Prime Minister of Romania
Prime Minister of Romania
The Prime Minister of Romania is the head of the Government of Romania. Initially, the office was styled President of the Council of Ministers , when the term "Government" included more than the Cabinet, and the Cabinet was called The Council of Ministers...
in 1860 and May–November 1868.

A member of the Golescu family
Golescu family
The Golescu family was an old boyar family of Wallachia, in what is now southern Romania. The earliest mention of them dates from the 15th century.-Members of the family:*Radu Golescu*Iordache Golescu*Dinicu Golescu*Zinca Golescu*Alexandru Golescu-Albu...
of boyars, Nicolae was born in Câmpulung
Câmpulung
Câmpulung , or Câmpulung Muscel, is a city in the Argeş County, Wallachia, Romania. It is situated among the outlying hills of the Transylvanian Alps, at the head of a long well-wooded glen traversed by the Râul Târgului, a tributary of the Argeş.Its pure air and fine scenery render Câmpulung a...
as the son of Dinicu Golescu
Dinicu Golescu
Dinicu Golescu , a member of the Golescu family of boyars, was a Wallachian Romanian man of letters, mostly noted for his travel writings and journalism....
; he was educated together with his other three brothers in Switzerland
Switzerland
Switzerland name of one of the Swiss cantons. ; ; ; or ), in its full name the Swiss Confederation , is a federal republic consisting of 26 cantons, with Bern as the seat of the federal authorities. The country is situated in Western Europe,Or Central Europe depending on the definition....
. Nicolae and his brother Ştefan
Stefan Golescu
Ştefan Golescu was a Wallachian Romanian politician who served as the Minister of Foreign Affairs for two terms from March 1, 1867 to August 5, 1867 and from November 13, 1867 to April 30, 1868, and as Prime Minister of Romania between November 26, 1867 and May 12, 1868.-Biography:Born in a boyar...
returned in 1830 to join the Wallachian Army, where Nicolae became a major
Major
Major is a rank of commissioned officer, with corresponding ranks existing in almost every military in the world.When used unhyphenated, in conjunction with no other indicator of rank, the term refers to the rank just senior to that of an Army captain and just below the rank of lieutenant colonel. ...
in 1834.

In the same year he joined the Philarmonic Society, a group similar to the Freemasonry
Freemasonry
Freemasonry is a fraternal organisation that arose from obscure origins in the late 16th to early 17th century. Freemasonry now exists in various forms all over the world, with a membership estimated at around six million, including approximately 150,000 under the jurisdictions of the Grand Lodge...
. In 1840 he was a prosecutor
Prosecutor
The prosecutor is the chief legal representative of the prosecution in countries with either the common law adversarial system, or the civil law inquisitorial system...
in the trial of the participants in the Mitică Filipescu plot, and later on he was Wallachia's Minister of Internal Affairs.

In 1842, Wallachia was under the protectorate of Imperial Russia, and Nicolae Golescu tried to obtain the mandate of Prince of Wallachia from Emperor Nicholas
Nicholas I of Russia
Nicholas I , was the Emperor of Russia from 1825 until 1855, known as one of the most reactionary of the Russian monarchs. On the eve of his death, the Russian Empire reached its historical zenith spanning over 20 million square kilometers...
, but was denied and remained a Minister of Internal Affairs until 1847. In the meantime, he began taking part in gatherings of various revolutionary societies.

He joined the radical
Radicalism (historical)
The term Radical was used during the late 18th century for proponents of the Radical Movement. It later became a general pejorative term for those favoring or seeking political reforms which include dramatic changes to the social order...
liberals, being part of the 1848 revolutionary committee, together with Ion Ghica
Ion Ghica
Ion Ghica was a Romanian revolutionary, mathematician, diplomat and twice Prime Minister of Romania . He was a full member of the Romanian Academy and its president for four times...
, Nicolae Bălcescu
Nicolae Balcescu
Nicolae Bălcescu was a Romanian Wallachian soldier, historian, journalist, and leader of the 1848 Wallachian Revolution.-Early life:...
, Ion Heliade Rădulescu
Ion Heliade Radulescu
Ion Heliade Rădulescu or Ion Heliade was a Wallachian-born Romanian academic, Romantic and Classicist poet, essayist, memoirist, short story writer, newspaper editor and politician...
and others (including his brother Ştefan and his cousin Alexandru G. Golescu
Alexandru G. Golescu
Alexandru G. Golescu was a Romanian politician who served as a Prime Minister of Romania in 1870 .-Early life:...
).

Afterwards, on June 11, 1848, when the Wallachian revolution started in Bucharest
Bucharest
Bucharest is the capital municipality, cultural, industrial, and financial centre of Romania. It is the largest city in Romania, located in the southeast of the country, at , and lies on the banks of the Dâmbovița River....
, Nicolae Golescu was a Minister of Internal Affairs for the Provisional Government. The following week, he and Ana Ipătescu took initiative in rallying civilians in defense of the revolutionary power, as it was threatened by conservative
Conservatism
Conservatism is a political and social philosophy that promotes the maintenance of traditional institutions and supports, at the most, minimal and gradual change in society. Some conservatives seek to preserve things as they are, emphasizing stability and continuity, while others oppose modernism...
plot (June 19).

However, on 25 July, the government resigned on pressure from the Ottoman Empire
Ottoman Empire
The Ottoman EmpireIt was usually referred to as the "Ottoman Empire", the "Turkish Empire", the "Ottoman Caliphate" or more commonly "Turkey" by its contemporaries...
, and after the Ottoman intervention of September, Nicolae Golescu went into exile, to return in the 1850s and support Alexander John Cuza
Alexander John Cuza
Alexander John Cuza was a Moldavian-born Romanian politician who ruled as the first Domnitor of the United Principalities of Moldavia and Wallachia between 1859 and 1866.-Early life:...
's bid for the throne of a united Danubian Principalities
Danubian Principalities
Danubian Principalities was a conventional name given to the Principalities of Moldavia and Wallachia, which emerged in the early 14th century. The term was coined in the Habsburg Monarchy after the Treaty of Küçük Kaynarca in order to designate an area on the lower Danube with a common...
(Wallachia and Moldavia
Moldavia
Moldavia is a geographic and historical region and former principality in Eastern Europe, corresponding to the territory between the Eastern Carpathians and the Dniester river...
).

In 1866, after joining the alliance of Liberals and Conservatives against Cuza's unsanctioned personal regime, he was for a short time one of the regent
Regent
A regent, from the Latin regens "one who reigns", is a person selected to act as head of state because the ruler is a minor, not present, or debilitated. Currently there are only two ruling Regencies in the world, sovereign Liechtenstein and the Malaysian constitutive state of Terengganu...
s. He was then Foreign Minister and a member of Ion C. Brătianu's Liberal Party
National Liberal Party (Romania)
The National Liberal Party , abbreviated to PNL, is a centre-right liberal party in Romania. It is the third-largest party in the Romanian Parliament, with 53 seats in the Chamber of Deputies and 22 in the Senate: behind the centre-right Democratic Liberal Party and the centre-left Social...
, formed during the rule of Carol I
Carol I of Romania
Carol I , born Prince Karl of Hohenzollern-Sigmaringen was reigning prince and then King of Romania from 1866 to 1914. He was elected prince of Romania on 20 April 1866 following the overthrow of Alexandru Ioan Cuza by a palace coup...
.
The source of this article is wikipedia, the free encyclopedia.  The text of this article is licensed under the GFDL.