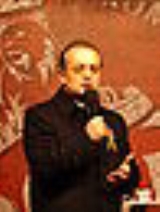 Encyclopedia
The Prime Minister of Romania is the head of the Government of Romania
Government of Romania
The Government of Romania forms one half of the country's executive branch . It is headed by the Prime-Minister, and consists of the Ministries, various subordinated institutions and agencies, and the 42 Prefectures...
. Initially, the office was styled President of the Council of Ministers , when the term "Government" included more than the Cabinet, and the Cabinet was called The Council of Ministers (Consiliul de Miniştri). The title was officially changed to Prime Minister during the communist regime
Communist Romania
Communist Romania was the period in Romanian history when that country was a Soviet-aligned communist state in the Eastern Bloc, with the dominant role of Romanian Communist Party enshrined in its successive constitutions...
.

Currently, the prime minister is Emil Boc
Emil Boc
Emil Boc is the Prime Minister of Romania, having served since December 2008. In June 2004, he was elected Mayor of Cluj-Napoca, the largest city in Transylvania. Boc is also the president of the Democratic Liberal Party, who designated him as Prime Minister in 2008. On October 13, 2009, his...
, president of the Democratic Liberal Party
Democratic Liberal Party (Romania)
The Democratic Liberal Party is a populist, centre-right party in Romania. It was formed on 15 December 2007, when the Democratic Party merged with the Liberal Democratic Party. From 2004 to 2007, the Democratic Party was part of the governing Justice and Truth Alliance...
. He and his cabinet were confirmed by Parliament on 22 December 2008. On 13 October 2009, Boc and his cabinet
Boc I Cabinet
The first Boc Cabinet of the Government of Romania was composed of 20 ministers, listed below. It was sworn in on 22 December 2008, the same day it received the vote of confidence from the Parliament of Romania. It was a grand coalition government, formed by the PD-L and the PSD...
were defeated following a no-confidence motion, rendering him Acting Prime Minister. He was reconfirmed in office on 23 December of that year after Traian Băsescu
Traian Basescu
Traian Băsescu is the current President of Romania. After serving as the mayor of Bucharest from June 2000 until December 2004, he was elected president in the Romanian Presidential Elections of 2004 and inaugurated on December 20, 2004...
was re-elected
Romanian presidential election, 2009
The first round of 2009 Romanian presidential elections was held in Romania on 22 November and a run-off round between Traian Băsescu and Mircea Geoană was held on 6 December 2009. Although most exit polls favored Geoană in the runoff, the authorities declared Băsescu the narrow victor with 50.33%...
President of Romania and the latter re-appointed Boc.

According to the Romanian Constitution, the President of the Republic shall designate a candidate to the office of Prime Minister, as a result of his consultation with the party which has obtained absolute majority in Parliament, or -unless such majority exists - with the parties represented in Parliament.

The Prime Minister, the Ministers and other members of the Government shall individually take an oath before the President of Romania, as provided under Article 82. The Government as a whole and each of its members shall exercise the mandate from the date of taking the oath.

The Prime Minister shall direct Government actions and co-ordinate activities of its members, with the observance of the powers and duties incumbent on them. Likewise, he shall submit to the Chamber of Deputies or the Senate reports and statements on Government policy, to be debated with priority.

The President of the Republic cannot dismiss the Prime Minister.