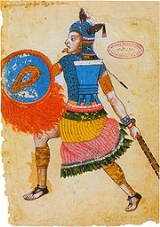 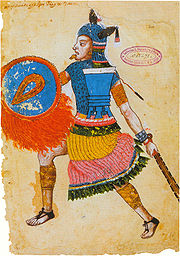 Nezahualcoyotl (April 28, 1402 – June 4, 1472) was a philosopher, warrior, architect, poet and ruler (tlatoani
Tlatoani
Tlatoani is the Nahuatl term for the ruler of an altepetl, a pre-Hispanic state. The word literally means "speaker", but may be translated into English as "king". A is a female ruler, or queen regnant....
) of the city-state of Texcoco in pre-Columbian
Pre-Columbian
The pre-Columbian era incorporates all period subdivisions in the history and prehistory of the Americas before the appearance of significant European influences on the American continents, spanning the time of the original settlement in the Upper Paleolithic period to European colonization during...
Mexico
Mexico
The United Mexican States , commonly known as Mexico , is a federal constitutional republic in North America. It is bordered on the north by the United States; on the south and west by the Pacific Ocean; on the southeast by Guatemala, Belize, and the Caribbean Sea; and on the east by the Gulf of...
. Unlike other high-profile Mexican figures from the century preceding the Spanish Conquest
Spanish conquest of Mexico
The Spanish conquest of the Aztec Empire was one of the most important campaigns in the Spanish colonization of the Americas. The invasion began in February 1519 and was acclaimed victorious on August 13, 1521, by a coalition army of Spanish conquistadors and Tlaxcalan warriors led by Hernán Cortés...
, Nezahualcoyotl was not an Aztec
Aztec
The Aztec people were certain ethnic groups of central Mexico, particularly those groups who spoke the Nahuatl language and who dominated large parts of Mesoamerica in the 14th, 15th and 16th centuries, a period referred to as the late post-classic period in Mesoamerican chronology.Aztec is the...
; his people were the Acolhua
Acolhua
The Acolhua are a Mesoamerican people who arrived in the Valley of Mexico in or around the year 1200 CE. The Acolhua were a sister culture of the Aztecs as well as the Tepanec, Chalca, Xochimilca and others....
, another Nahuan people settled in the eastern part of the Valley of Mexico
Valley of Mexico
The Valley of Mexico is a highlands plateau in central Mexico roughly coterminous with the present-day Distrito Federal and the eastern half of the State of Mexico. Surrounded by mountains and volcanoes, the Valley of Mexico was a centre for several pre-Columbian civilizations, including...
, settling on the eastern side of Lake Texcoco
Lake Texcoco
Lake Texcoco was a natural lake formation within the Valley of Mexico. The Aztecs built the city of Tenochtitlan on an island in the lake. The Spaniards built Mexico City over Tenochtitlan...
.

Acolmiztli Nezahualcoyotl was the son of Ixtlilxochitl I
Ixtlilxochitl I
Ixtlilxochitl Ome Tochtli was the ruler of the Acolhua city-state of Texcoco from 1409 to 1418 and the father of the famous "poet-king" Nezahualcoyotl.-Early years as tlatoani:...
and Matlalcihuatzin, the daughter of Huitzilihuitl
Huitzilíhuitl
Huitzilihuitl was the second tlatoani of Tenochtitlan, governing from 1396 to 1417, .- Family and childhood :...
. Though born heir to a throne, his youth was not marked by princely luxury. His father had set Texcoco against the powerful city of Azcapotzalco
Azcapotzalco (altepetl)
Azcapotzalco was a pre-Columbian Nahua altepetl , capital of the Tepanec empire, in the Valley of Mexico, on the western shore of Lake Texcoco.The name Azcapotzalco means "at the anthill" in Nahuatl...
, ruled by the Tepanec
Tepanec
The Tepanecs or Tepaneca are a Mesoamerican people who arrived in the Valley of Mexico in the late 12th or early 13th centuries. The Tepanec were a sister culture of the Aztecs as well as the Acolhua and others—these tribes spoke the Nahuatl language and shared the same general pantheon, with...
. In 1418, when the young prince was fifteen, the Tepanecs of Azcapotzalco, led by Tezozomoc, conquered Texcoco and Nezahualcoyotl had to flee into exile in Huexotzinco, returning to stay in Tenochtitlan in 1422. After Tezozomoc's son Maxtla
Maxtla
Maxtla was a Tepanec ruler of Azcapotzalco from 1426 to his death in 1428. He succeeded his father Tezozomoc, possibly through assassination of his elder brother Tayauh. His reign saw a rapid decline in the fortunes of Azcapotzalco...
became ruler of Azcapotzalco, Nezahualcoyotl returned to Texcoco, but had to go into exile a second time when he learned that Maxtla plotted against his life.


The reconquest of Texcoco

Meanwhile the tenochca Tlatoani
Tlatoani
Tlatoani is the Nahuatl term for the ruler of an altepetl, a pre-Hispanic state. The word literally means "speaker", but may be translated into English as "king". A is a female ruler, or queen regnant....
Itzcoatl
Itzcóatl
Itzcoatl was the fourth emperor of the Aztecs, ruling from 1427 to 1440, the period when the Mexica threw off the domination of the Tepanecs and laid the foundations for the eventual Aztec Empire.- Biography :...
requested help from the Huexotzincans against the Tepanecs, Nezahualcoyotl visioned the opportunity to join a single military force in order to fight the mighty kingdom of Atzcapotzalco. After being offered support from insurgents inside Acolhuacan and rebel Tepanecs from Coyohuacan, Nezahualcoyotl joined the war. He called for a coalition composed by most of the most important pre-Hispanic cities of the time: Tenochtitlan, Tlacopan
Tlacopan
Tlacopan , also called Tacuba, was a Pre-Columbian Mesoamerican city-state situated on the western shore of Lake Texcoco.Founded by Tlacomatzin, Tlacopan was a Tepanec kingdom subordinate to nearby Azcapotzalco...
, Tlatelolco
Tlatelolco (altepetl)
Tlatelolco was a pre-Columbian Nahua altepetl in the Valley of Mexico. Its inhabitants were known as Tlatelolca. The Tlatelolca were a part of the Mexica ethnic group, a Nahuatl speaking people who arrived in what is now central Mexico in the 13th century...
, Huexotzingo, Tlaxcala
Tlaxcala
Tlaxcala officially Estado Libre y Soberano de Tlaxcala is one of the 31 states which along with the Federal District comprise the 32 federative entities of Mexico. It is divided into 60 municipalities and its capital city is Tlaxcala....
and Chalco
Chalco
Aluminum Corporation of China Limited, also known as Chalco , is a multinational aluminum company headquartered in Beijing, People's Republic of China...
. Once declared a shared war and a single effort, the coalition army of more than 100,000 men under the command of Nezahualcoyotl and other important tlatoanis headed towards Azcapotzalco from the city of Calpulalpan. A military offensive that in 1428 would reconquer Acolhuacan
Acolhuacan
Acolhuacan or Aculhuacan was a pre-Columbian province in the east of the Valley of Mexico, inhabited by the Acolhua. Its capital was Texcoco . Other altepetl in Acolhuacan included Coatl Ichan, Ecatepec, Teotihuacan, and Tepetlaoztoc....
, capital city of the kingdom of Texcoco. 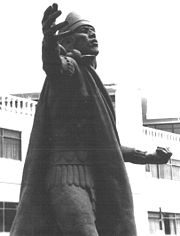 Revered as a sage and poet-king, Nezahualcoyotl drew a group of followers called the tlamatini
Tlamatini
Tlamatini is a Nahuatl language word meaning "someone who knows something", generally translated as "wise man". The word is analyzable as derived from the transitive verb mati "to know" with the prefix tla- indicating an unspecified inanimate object translatable by "something" and the...
, generally translated as "wise men". These men were philosophers, artists, musicians and sculptors who pursued their art in the court of Texcoco.

Nezahualcoyotl is credited with cultivating what came to be known as Texcoco's Golden Age, which brought the rule of law, scholarship and artistry to the city and set high standards that influenced other cultures. Nezahualcoyotl designed a code of law based on the division of power, which created the councils of finance, war, justice and culture (the last actually called the council of music). Under his rule Texcoco flourished as the intellectual centre of the Triple Alliance and it possessed an extensive library that, tragically, did not survive the Spanish conquest. He also established an academy of music and welcomed worthy entrants from all regions of Mesoamerica
Mesoamerica
Mesoamerica is a region and culture area in the Americas, extending approximately from central Mexico to Belize, Guatemala, El Salvador, Honduras, Nicaragua, and Costa Rica, within which a number of pre-Columbian societies flourished before the Spanish colonization of the Americas in the 15th and...
.

Texcoco became known as "the Athens of the Western World" -- to quote the historian Lorenzo Boturini Bernaducci
Lorenzo Boturini Bernaducci
Lorenzo Boturini Benaduci was a historian, antiquary and ethnographer of New Spain, the Spanish Empire's colonial dominions in North America.-Early life:...
. Indeed, the remains of hilltop gardens, sculptures and a massive aqueduct system show the impressive engineering skills and aesthetic appreciation of his reign.
Many believe, however, that of all the creative intellects nurtured by this Texcocan "Athens," by far the greatest belonged to the king himself. He is considered one of the great designers and architects of the pre-Hispanic era. He is said to have personally designed the "albarrada de Nezahualcoyotl" ("dike of Nezahualcoyotl") to separate the fresh and brackish waters of Lake Texcoco, a system that was still in use over a century after his death.

The date of Nezahualcoyotl's death is recorded as being June 4, 1472, survived by many concubines and an estimated 110 children. He was succeeded by his son Nezahualpilli
Nezahualpilli
Nezahualpilli was ruler of the Mesoamerican city-state of Texcoco, elected by the city's nobility after the death of his father, Nezahualcoyotl, in 1472....
as tlatoani of Texcoco. His great-grandson Juan Bautista de Pomar
Juan Bautista de Pomar
Juan Bautista Pomar was a historian and writer interested in pre-Columbian Aztec history.According to references by Fray Juan de Torquemada, he was born around 1535 at Texcoco. He was the great grandson of Nezahualcoyotl, and was half-Spanish on his father's side...
is credited with the compilations of a collection of Nahuatl poems. Romances de los señores de la Nueva España, and with a chronicle of the history of the Aztecs. A species of the Xiphophorus
Xiphophorus
Xiphophorus is a genus of euryhaline and freshwater fishes in the family Poeciliidae of order Cyprinodontiformes. The many Xiphophorus species are all called either platyfish or swordtails. The type species is X. hellerii, the Green swordtail. Platyfish and swordtails are Live-bearers, meaning...
freshwater fish is named after Nezahualcoyotl.

Nezahualcoyotl has been remembered as a poet. This is because a number of poems in the Classical Nahuatl
Classical Nahuatl
Classical Nahuatl is a term used to describe the variants of the Nahuatl language that were spoken in the Valley of Mexico — and central Mexico as a lingua franca — at the time of the 16th-century Spanish conquest of Mexico...
language written in the 16th and 17th centuries have been ascribed to him. In fact this attribution is somewhat doubtful since Nezahualcoyotl died almost 50 years before the conquest and the poems were written down another fifty years after that. One of the writers who put Aztec Poems in writing, Juan Bautista de Pomar
Juan Bautista de Pomar
Juan Bautista Pomar was a historian and writer interested in pre-Columbian Aztec history.According to references by Fray Juan de Torquemada, he was born around 1535 at Texcoco. He was the great grandson of Nezahualcoyotl, and was half-Spanish on his father's side...
was a grandson of Nezahualcoyotl, and he may have attributed the poems to his grandfather.

Poems attributed to Nezahualcoyotl's include:


One of his poems appears in tiny print on the face of the 100 peso note.

I love the color of the jade
Jade
Jade is an ornamental stone.The term jade is applied to two different metamorphic rocks that are made up of different silicate minerals:...
stone

And the intoxicating scent of flowers,

But more than all I love my brother, man.