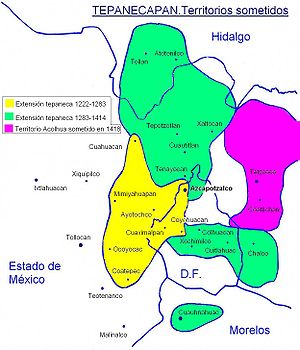 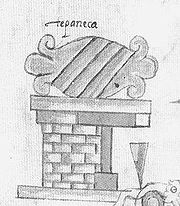 The Tepanecs or Tepaneca are a Mesoamerica
Mesoamerica
Mesoamerica is a region and culture area in the Americas, extending approximately from central Mexico to Belize, Guatemala, El Salvador, Honduras, Nicaragua, and Costa Rica, within which a number of pre-Columbian societies flourished before the Spanish colonization of the Americas in the 15th and...
n people who arrived in the Valley of Mexico
Valley of Mexico
The Valley of Mexico is a highlands plateau in central Mexico roughly coterminous with the present-day Distrito Federal and the eastern half of the State of Mexico. Surrounded by mountains and volcanoes, the Valley of Mexico was a centre for several pre-Columbian civilizations, including...
in the late 12th or early 13th centuries. The Tepanec were a sister culture of the Aztecs (or Mexica) as well as the Acolhua
Acolhua
The Acolhua are a Mesoamerican people who arrived in the Valley of Mexico in or around the year 1200 CE. The Acolhua were a sister culture of the Aztecs as well as the Tepanec, Chalca, Xochimilca and others....
and others—these tribes spoke the Nahuatl language and shared the same general pantheon, with local and tribal variations.

In the early 15th century, Tezozomoc
Tezozomoc
Tezozomoc Yacateteltetl , was a Tepanec leader who ruled the altepetl of Azcapotzalco from the year 1353 or Five Reed or Eight Rabbit until his death in the year Twelve Rabbit...
brought the Tepanec to their height of power; at that point they controlled nearly all of the Valley of Mexico as well parts of the Toluca
Toluca
Toluca, formally known as Toluca de Lerdo, is the state capital of Mexico State as well as the seat of the Municipality of Toluca. It is the center of a rapidly growing urban area, now the fifth largest in Mexico. It is located west-southwest of Mexico City and only about 40 minutes by car to the...
and Morelos
Morelos
Morelos officially Estado Libre y Soberano de Morelos is one of the 31 states which, with the Federal District, comprise the 32 Federal Entities of Mexico. It is divided in 33 municipalities and its capital city is Cuernavaca....
valleys. Native sources say that Tezozomoc lived to the age of over 100 and was legendary for his generalship and statesmanship.

The death of Tezozomoc in 1426 brought his sons Tayauh and Maxtla
Maxtla
Maxtla was a Tepanec ruler of Azcapotzalco from 1426 to his death in 1428. He succeeded his father Tezozomoc, possibly through assassination of his elder brother Tayauh. His reign saw a rapid decline in the fortunes of Azcapotzalco...
to the throne, with Maxtla most likely poisoning Tayauh.

With the rise of the Aztec empire, Tlacopan became the predominant Tepanec city, although both Tenochtitlan and Texcoco eclipsed Tlacopan’s size and prestige.
The source of this article is wikipedia, the free encyclopedia.  The text of this article is licensed under the GFDL.