Encyclopedia
The Neighborhood of Make-Believe is the fictional kingdom inhabited by the hand puppet
Puppet
A puppet is an inanimate object or representational figure animated or manipulated by an entertainer, who is called a puppeteer. It is used in puppetry, a play or a presentation that is a very ancient form of theatre....
characters on the children's television program Mister Rogers' Neighborhood
Mister Rogers' Neighborhood
Mister Rogers' Neighborhood, also known as Mister Rogers, is an American children's television series that was created and hosted by Fred Rogers. The series is aimed primarily at preschool ages, 2-5, but has been stated by Public Broadcasting Service as "appropriate for all ages"...
, produced from 1968 to 2001. The show's principal puppeteer
Puppeteer
A puppeteer is a person who manipulates an inanimate object, such as a puppet, in real time to create the illusion of life. The puppeteer may be visible to or hidden from the audience. A puppeteer can operate a puppet indirectly by the use of strings, rods, wires, electronics or directly by his or...
is Fred Rogers himself, who also developed many of the puppet characters in the 1950s for Josie Carey
Josie Carey
Josephine Vicari Massucci Franz , known by the stage name Josie Carey, was a lyricist and a host of several children's television shows.-Biography:...
's program, The Children's Corner.

The adventures of the citizens of the Neighborhood of Make-Believe appear in a short segment once in the middle of almost every episode. Mr. Rogers deliberately makes clear the distinction between the "real world" and the Neighborhood of Make-Believe by transitioning in and out of the Neighborhood segment via a distinctive red and yellow model electric trolley that enters and exits through small tunnels in the wall (or occasionally by setting up small tabletop models of the various Neighborhood of Make Believe buildings), and by discussing what had happened with his audience after the end of each segment. The same storyline continues for a week or more (a la a soap opera
Soap opera
A soap opera, sometimes called "soap" for short, is an ongoing, episodic work of dramatic fiction presented in serial format on radio or as television programming. The name soap opera stems from the original dramatic serials broadcast on radio that had soap manufacturers, such as Procter & Gamble,...
), though Rogers is always sure to recap the plot for children.

The characters in the Neighborhood of Make-Believe are either played by actors or hand puppets.

There are several other puppets; they include:

Some characters appeared more frequently in the original series than the modern series. The rare puppets include: 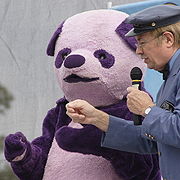 The world of the Neighborhood of Make-Believe also features several other "regions." Along with King Friday's realm, there are also bordering territories, including:


Characters also frequently interact with the inhabitants of Planet Purple, where everything and everyone are purple and exactly the same. Every girl on Planet Purple is named "Pauline," every boy, "Paul." Purple Panda, a resident of Planet Purple, can return there "the purple way" (just by thinking). Moreover, all of the planet's inhabitants speak in monotone
Monotone
Monotone refers to a sound, for example speech or music, that has a single unvaried tone.Monotone or monotonicity may also refer to:*Monotone , an open source revision control system*Monotone class theorem, in measure theory...
English
English language
English is a West Germanic language that arose in the Anglo-Saxon kingdoms of England and spread into what was to become south-east Scotland under the influence of the Anglian medieval kingdom of Northumbria...
, often intoning, "WE ARE PEOPLE FROM THE PLANET PURPLE." Inhabitants of Planet Purple are forbidden to sit in rocking chairs, and if they do, they are not allowed to return home. In one visit to the Neighborhood, Purple Panda sits in one of Cornflake S. Pecially's rocking chairs. However, with the help of the rest of the Neighbors, it is agreed that sitting in rocking chairs is an acceptable activity for all people, and Purple Panda is allowed to return home. Planet Purple was discovered by Lady Elaine Fairchilde.


Layout of the Neighborhood of Make Believe (from west to east)

Here are the different locations in the Neighborhood of Make-Believe:

During the course of the series, the people and puppets in The Neighborhood of Make-believe produce 13 mini-operas, with the assistance of Reardon, and a play, Josephine the Short-necked Giraffe (1989), with the help of Princess Zelda.

The 13 operas are titled, or at least known as: