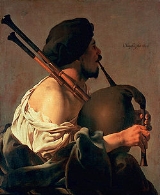 Bagpipes are a class of musical instrument
Musical instrument
A musical instrument is a device created or adapted for the purpose of making musical sounds. In principle, any object that produces sound can serve as a musical instrument—it is through purpose that the object becomes a musical instrument. The history of musical instruments dates back to the...
, aerophone
Aerophone
An aerophone is any musical instrument which produces sound primarily by causing a body of air to vibrate, without the use of strings or membranes, and without the vibration of the instrument itself adding considerably to the sound...
s, using enclosed reeds fed from a constant reservoir of air in the form of a bag. Though the Scottish Great Highland Bagpipe
Great Highland Bagpipe
The Great Highland Bagpipe is a type of bagpipe native to Scotland. It has achieved widespread recognition through its usage in the British military and in pipe bands throughout the world. It is closely related to the Great Irish Warpipes....
and Irish uilleann pipes
Uilleann pipes
The uilleann pipes or //; ) are the characteristic national bagpipe of Ireland, their current name, earlier known in English as "union pipes", is a part translation of the Irish-language term píobaí uilleann , from their method of inflation.The bag of the uilleann pipes is inflated by means of a...
have the greatest international visibility, bagpipes of many different types come from different regions throughout Europe, Northern Africa, the Persian Gulf, and the Caucasus.

The term "bagpipe" is equally correct in the singular or plural, although in the English language, pipers most commonly talk of "the pipes", "a set of pipes" or "a stand of pipes".

Pakistan
Pakistan
Pakistan , officially the Islamic Republic of Pakistan is a sovereign state in South Asia. It has a coastline along the Arabian Sea and the Gulf of Oman in the south and is bordered by Afghanistan and Iran in the west, India in the east and China in the far northeast. In the north, Tajikistan...
is one of the world's largest producers of bagpipes and is the second largest exporter after Scotland
Scotland
Scotland is a country that is part of the United Kingdom. Occupying the northern third of the island of Great Britain, it shares a border with England to the south and is bounded by the North Sea to the east, the Atlantic Ocean to the north and west, and the North Channel and Irish Sea to the...
.


A set of bagpipes minimally consists of an air supply, a bag, a chanter
Chanter
The chanter is the part of the bagpipe upon which the player creates the melody. It consists of a number of finger-holes, and in its simpler forms looks similar to a recorder...
, and usually a drone
Drone (music)
In music, a drone is a harmonic or monophonic effect or accompaniment where a note or chord is continuously sounded throughout most or all of a piece. The word drone is also used to refer to any part of a musical instrument that is just used to produce such an effect.-A musical effect:A drone...
.

1. To which section of the Orchestra is the bagpipe most closely related?
More
x