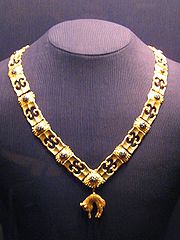 A neck order is a type of decoration
State decoration
State decorations are orders, medals and other decorations granted by a state. International decorations are similar, but are not granted by a specific nation but rather an international organization....
which is designed to be worn and displayed around a person's neck
Neck
The neck is the part of the body, on many terrestrial or secondarily aquatic vertebrates, that distinguishes the head from the torso or trunk. The adjective signifying "of the neck" is cervical .-Boner anatomy: The cervical spine:The cervical portion of the human spine comprises seven boney...
, rather than hung from the chest
Chest
The chest is a part of the anatomy of humans and various other animals. It is sometimes referred to as the thorax or the bosom.-Chest anatomy - Humans and other hominids:...
as is the standard practice for displaying most decorations.

Most of the insignia of orders
Order (decoration)
An order or order of merit is a visible honour, awarded by a government, dynastic house or international organization to an individual, usually in recognition of distinguished service to a nation or to humanity. The distinction between orders and decorations is somewhat vague, except that most...
are issued in several degrees which typically include a neck order version for Commander
Commander
Commander is a naval rank which is also sometimes used as a military title depending on the individual customs of a given military service. Commander is also used as a rank or title in some organizations outside of the armed forces, particularly in police and law enforcement.-Commander as a naval...
s and Grand Officers. In countries which do not typically bestow orders with degrees, neck orders are still usually considered to be high ranking decorations.

In the Middle Ages most orders were worn on a collar – see livery collar
Livery collar
A livery collar or chain of office is a collar or heavy chain, usually of gold, worn as insignia of office or a mark of fealty or other association in Europe from the Middle Ages onwards....
. Later, in the 17th. century the insignia were worn hanging from a ribbon around the neck.
When in the late 18th. century orders were divided into several classes the cross on a ribbon around the neck became the privilege of a commander.
A decoration in that rank is usually awarded to high ranking officials like brigadiers, consuls and secretaries of State.

A female usually wears her commander's cross on a bow on the shoulder of her dress.

In the 19th century it was not unusual to wear a Grand Cross, normally hanging from a ribbon over the shoulder to the hip as a neck order when this was considered more convenient or when another Grand Cross was worn.

A number of nations confer honors which are signified in the form of an insignia on a collar or chain, including:

Some nations confer honors which are signified in the form of a badge which is worn suspended from a ribbon
Ribbon
A ribbon or riband is a thin band of material, typically cloth but also plastic or sometimes metal, used primarily for binding and tying. Cloth ribbons, most commonly silk, are often used in connection with clothing, but are also applied for innumerable useful, ornamental and symbolic purposes...
(also known as riband or ribband) around the neck, including: