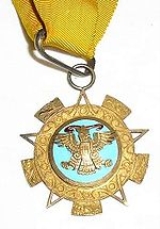 Encyclopedia
The Order of the Aztec
Aztec
The Aztec people were certain ethnic groups of central Mexico, particularly those groups who spoke the Nahuatl language and who dominated large parts of Mesoamerica in the 14th, 15th and 16th centuries, a period referred to as the late post-classic period in Mesoamerican chronology.Aztec is the...
Eagle is a Mexican
Mexico
The United Mexican States , commonly known as Mexico , is a federal constitutional republic in North America. It is bordered on the north by the United States; on the south and west by the Pacific Ocean; on the southeast by Guatemala, Belize, and the Caribbean Sea; and on the east by the Gulf of...
order
Order
-Ordinality:*Collation, the sequencing and ordering of text**Alphabetical order**Lexicographical order*Order of precedence-Philosophy:* Natural order * Implicate and explicate order according to David Bohm-Science and mathematics:...
and is the highest decoration awarded to foreigners in the country.

There is some design similarity of the order with the coat of arms of Mexico
Coat of arms of Mexico
The current coat of arms of Mexico has been an important symbol of Mexican politics and culture for centuries. The coat of arms depicts a Mexican Golden Eagle perched upon a prickly pear cactus devouring a snake. To the people of Tenochtitlan this would have strong religious connotations, but to...
, particularly the golden eagle
Eagle
Eagles are members of the bird family Accipitridae, and belong to several genera which are not necessarily closely related to each other. Most of the more than 60 species occur in Eurasia and Africa. Outside this area, just two species can be found in the United States and Canada, nine more in...
holding a snake
Snake
Snakes are elongate, legless, carnivorous reptiles of the suborder Serpentes that can be distinguished from legless lizards by their lack of eyelids and external ears. Like all squamates, snakes are ectothermic, amniote vertebrates covered in overlapping scales...
, which is associated with the Aztec civilization.

The classes are, in descending order: