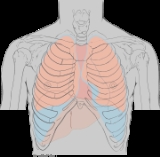 Overview
The chest is a part of the anatomy
Anatomy
Anatomy is a branch of biology and medicine that is the consideration of the structure of living things. It is a general term that includes human anatomy, animal anatomy , and plant anatomy...
of humans and various other animals. It is sometimes referred to as the thorax
Thorax
The thorax is a division of an animal's body that lies between the head and the abdomen.-In tetrapods:...
or the bosom.
In hominid
Hominidae
The Hominidae or include them .), as the term is used here, form a taxonomic family, including four extant genera: chimpanzees , gorillas , humans , and orangutans ....
s, the chest is the region of the body between the neck
Neck
The neck is the part of the body, on many terrestrial or secondarily aquatic vertebrates, that distinguishes the head from the torso or trunk. The adjective signifying "of the neck" is cervical .-Boner anatomy: The cervical spine:The cervical portion of the human spine comprises seven boney...
and the abdomen
Abdomen
In vertebrates such as mammals the abdomen constitutes the part of the body between the thorax and pelvis. The region enclosed by the abdomen is termed the abdominal cavity...
, along with its internal organs
Organ (anatomy)
In biology, an organ is a collection of tissues joined in structural unit to serve a common function. Usually there is a main tissue and sporadic tissues . The main tissue is the one that is unique for the specific organ. For example, main tissue in the heart is the myocardium, while sporadic are...
and other contents. It is mostly protected and supported by the ribcage, spine
Vertebral column
In human anatomy, the vertebral column is a column usually consisting of 24 articulating vertebrae, and 9 fused vertebrae in the sacrum and the coccyx. It is situated in the dorsal aspect of the torso, separated by intervertebral discs...
, and shoulder
Shoulder
The human shoulder is made up of three bones: the clavicle , the scapula , and the humerus as well as associated muscles, ligaments and tendons. The articulations between the bones of the shoulder make up the shoulder joints. The major joint of the shoulder is the glenohumeral joint, which...
girdle. Contents of the chest include the following:

In humans, the portion of the chest protected by the ribcage is also called the thorax
Thorax
The thorax is a division of an animal's body that lies between the head and the abdomen.-In tetrapods:...
.
Injury to the chest (also referred to as chest trauma, thoracic injury, or thoracic trauma) results in up to ¼ of all deaths due to trauma
Physical trauma
Trauma refers to "a body wound or shock produced by sudden physical injury, as from violence or accident." It can also be described as "a physical wound or injury, such as a fracture or blow." Major trauma can result in secondary complications such as circulatory shock, respiratory failure and death...
in the United States.
Different types of diseases or conditions that can be experienced in the chest include pleurisy
Pleurisy
Pleurisy is an inflammation of the pleura, the lining of the pleural cavity surrounding the lungs. Among other things, infections are the most common cause of pleurisy....
, flail chest
Flail chest
A flail chest is a life-threatening medical condition that occurs when a segment of the rib cage breaks under extreme stress and becomes detached from the rest of the chest wall. It occurs when multiple adjacent ribs are broken in multiple places, separating a segment, so a part of the chest wall...
, atelectasis
Atelectasis
Atelectasis is defined as the collapse or closure of alveoli resulting in reduced or absent gas exchange. It may affect part or all of one lung. It is a condition where the alveoli are deflated, as distinct from pulmonary consolidation.It is a very common finding in chest x-rays and other...
, and the most common condition, chest pain.