Encyclopedia
The National Maritime Museum (NMM) in Greenwich
Greenwich
Greenwich is a district of south London, England, located in the London Borough of Greenwich.Greenwich is best known for its maritime history and for giving its name to the Greenwich Meridian and Greenwich Mean Time...
, England
England
England is a country that is part of the United Kingdom. It shares land borders with Scotland to the north and Wales to the west; the Irish Sea is to the north west, the Celtic Sea to the south west, with the North Sea to the east and the English Channel to the south separating it from continental...
is the leading maritime museum
Maritime museum
A maritime museum is a museum specializing in the display of objects relating to ships and travel on large bodies of water...
of the United Kingdom
United Kingdom
The United Kingdom of Great Britain and Northern IrelandIn the United Kingdom and Dependencies, other languages have been officially recognised as legitimate autochthonous languages under the European Charter for Regional or Minority Languages...
and may be the largest museum of its kind in the world. The historic buildings forming part of the Maritime Greenwich World Heritage Site
World Heritage Site
A UNESCO World Heritage Site is a place that is listed by the UNESCO as of special cultural or physical significance...
, it also incorporates the Royal Observatory, Greenwich
Royal Observatory, Greenwich
The Royal Observatory, Greenwich , in London, England played a major role in the history of astronomy and navigation, and is best known as the location of the prime meridian...
, and 17th-century Queen's House
Queen's House
The Queen's House, Greenwich, is a former royal residence built between 1614-1617 in Greenwich, then a few miles downriver from London, and now a district of the city. Its architect was Inigo Jones, for whom it was a crucial early commission, for Anne of Denmark, the queen of King James I of England...
. The museum is a non-departmental public body
Non-departmental public body
In the United Kingdom, a non-departmental public body —often referred to as a quango—is a classification applied by the Cabinet Office, Treasury, Scottish Government and Northern Ireland Executive to certain types of public bodies...
sponsored by the Department for Culture, Media and Sport
Department for Culture, Media and Sport
The Department for Culture, Media and Sport is a department of the United Kingdom government, with responsibility for culture and sport in England, and some aspects of the media throughout the whole UK, such as broadcasting and internet....
.
Like other publicly funded national museums in the United Kingdom, the National Maritime Museum does not levy an admission charge although most temporary exhibitions do incur admission charges.

The Museum was created by the National Maritime Act of 1934 Chapter 43, under a Board of Trustees, appointed by H.M. Treasury. It is based on the generous donations of Sir James Caird (1864–1954). King George VI formally opened the Museum on 27 April 1937 when his daughter Princess Elizabeth, later Queen Elizabeth II
Elizabeth II of the United Kingdom
Elizabeth II is the constitutional monarch of 16 sovereign states known as the Commonwealth realms: the United Kingdom, Canada, Australia, New Zealand, Jamaica, Barbados, the Bahamas, Grenada, Papua New Guinea, the Solomon Islands, Tuvalu, Saint Lucia, Saint Vincent and the Grenadines, Belize,...
accompanied him for the journey along the Thames from London. The first Director was Sir Geoffrey Callender
Geoffrey Callender
Sir Geoffrey Arthur Romaine Callender was an English naval historian and the first director of the National Maritime Museum from its opening in 1937 until his death in 1946....
. 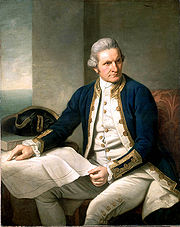 Since earliest times Greenwich
Greenwich
Greenwich is a district of south London, England, located in the London Borough of Greenwich.Greenwich is best known for its maritime history and for giving its name to the Greenwich Meridian and Greenwich Mean Time...
has had associations with the sea and navigation. It was a landing place for the Romans; Henry VIII
Henry VIII of England
Henry VIII was King of England from 21 April 1509 until his death. He was Lord, and later King, of Ireland, as well as continuing the nominal claim by the English monarchs to the Kingdom of France...
lived here; the navy has roots on the waterfront; and Charles II
Charles II of England
Charles II was monarch of the three kingdoms of England, Scotland, and Ireland.Charles II's father, King Charles I, was executed at Whitehall on 30 January 1649, at the climax of the English Civil War...
founded the Royal Observatory
Royal Observatory, Greenwich
The Royal Observatory, Greenwich , in London, England played a major role in the history of astronomy and navigation, and is best known as the location of the prime meridian...
in 1675 for "finding the longitude of places". The home of Greenwich Mean Time
Greenwich Mean Time
Greenwich Mean Time is a term originally referring to mean solar time at the Royal Observatory in Greenwich, London. It is arguably the same as Coordinated Universal Time and when this is viewed as a time zone the name Greenwich Mean Time is especially used by bodies connected with the United...
and the Prime Meridian
Prime Meridian
The Prime Meridian is the meridian at which the longitude is defined to be 0°.The Prime Meridian and its opposite the 180th meridian , which the International Date Line generally follows, form a great circle that divides the Earth into the Eastern and Western Hemispheres.An international...
since 1884, Greenwich has long been a centre for astronomical study, while navigators across the world have set their clocks according to its time of day. A painting of the Great Comet of 1843
Great Comet of 1843
The Great Comet of 1843 formally designated C/1843 D1 and 1843 I, was a long-period comet which became very bright in March 1843 . It was discovered on February 5, 1843 and rapidly brightened to become a great comet...
that was created by astronomer Charles Piazzi Smyth
Charles Piazzi Smyth
Charles Piazzi Smyth , was Astronomer Royal for Scotland from 1846 to 1888, well-known for many innovations in astronomy and his pyramidological and metrological studies of the Great Pyramid of Giza....
. The Museum has the most important holdings in the world on the history of Britain at sea comprising more than two million items, including maritime art (both British and 17th-century Dutch), cartography, manuscripts including official public records, ship models and plans, scientific and navigational instruments, instruments for time-keeping and astronomy (based at the Observatory). Its British portraits collection is exceeded in size only by that of the National Portrait Gallery and its holdings relating to Vice-Admiral Horatio Nelson
Horatio Nelson, 1st Viscount Nelson
Horatio Nelson, 1st Viscount Nelson, 1st Duke of Bronté, KB was a flag officer famous for his service in the Royal Navy, particularly during the Napoleonic Wars. He was noted for his inspirational leadership and superb grasp of strategy and unconventional tactics, which resulted in a number of...
and Captain James Cook, among many other individuals, are unrivalled. 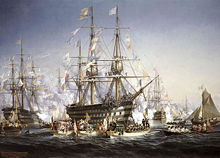 It has the world's largest maritime historical reference library (100,000 volumes) including books dating back to the 15th century. An active loans programme ensures that items from the collection are seen in the UK and abroad. Through its displays, exhibitions and outreach programmes the Museum also explores our current relationship with the sea and the future of the sea as an environmental force and resource.

By virtue of its pairing with the Royal Observatory, the Museum enjoys a unique conjunction of subjects (history, science and the arts), enabling it to trace the movement and accomplishments of people and the origins and consequences of empire. The outcome of the Museum's work is to achieve, for all its users at home and overseas, a greater understanding of British economic, cultural, social, political and maritime history and its consequences in the world today.

The collection of the National Maritime Museum also includes items taken from Germany after World War II, including several ship models and paintings. The museum has been criticized for possessing what has been described as "Looted art
Looted art
Looted art has been a consequence of looting during war, natural disaster and riot for centuries. Looting of art, archaeology and other cultural property may be an opportunistic criminal act, or may be a more organized case of unlawful or unethical pillage by the victor of a conflict."Looted art"...
".
The Museum regards these cultural objects as "war trophies", removed under the provisions of the Potsdam Conference
Potsdam Conference
The Potsdam Conference was held at Cecilienhof, the home of Crown Prince Wilhelm Hohenzollern, in Potsdam, occupied Germany, from 16 July to 2 August 1945. Participants were the Soviet Union, the United Kingdom, and the United States...
.

The Museum awards the Caird Medal annually in honour of its major donor, Sir James Caird. 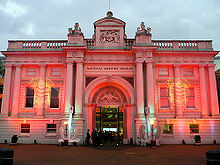 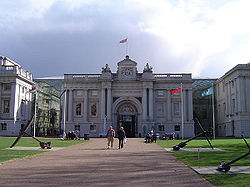 The gardens immediately to the north of the museum were reinstated in the late 1870s following construction of the cut-and-cover tunnel
Tunnel
A tunnel is an underground passageway, completely enclosed except for openings for egress, commonly at each end.A tunnel may be for foot or vehicular road traffic, for rail traffic, or for a canal. Some tunnels are aqueducts to supply water for consumption or for hydroelectric stations or are sewers...
between Greenwich
Greenwich station
Greenwich railway station is about 400 m southwest of the town centre of Greenwich, London, England. It is an interchange between National Rail trains between central London and Dartford , and the Docklands Light Railway between Lewisham to the south and the Docklands area and the City of London...
and Maze Hill
Maze Hill railway station
Maze Hill railway station, in the Maze Hill area of Greenwich, London, is the closest railway station to Greenwich Park, being about two minutes walk from the north-east corner of the park....
stations. The tunnel comprised part of the final section of the London and Greenwich Railway
London and Greenwich Railway
The London and Greenwich Railway was opened in London between 1836 and 1838. It was the first steam railway to have a terminus in the capital, the first of any to be built specifically for passenger service, and the first example of an elevated railway....
and opened in 1878.

Flamsteed House (1675–76), the original part of the Royal Observatory, was designed by Sir Christopher Wren
Christopher Wren
Sir Christopher Wren FRS is one of the most highly acclaimed English architects in history.He used to be accorded responsibility for rebuilding 51 churches in the City of London after the Great Fire in 1666, including his masterpiece, St. Paul's Cathedral, on Ludgate Hill, completed in 1710...
and was the first purpose-built scientific research facility in Britain.

In 1953, the Old Royal Observatory became part of the Museum. Flamsteed House, was first opened for visitors by Queen Elizabeth II in 1960.

The 17th-century Queen’s House, an early classical building designed by Inigo Jones
Inigo Jones
Inigo Jones is the first significant British architect of the modern period, and the first to bring Italianate Renaissance architecture to England...
, is the keystone of the historic "park and palace" landscape of maritime Greenwich.

The Queen's House was refurbished in 2001 to become the heart of displays of art from the Museum's collection.

At the end of March 2008, the museum announced that Israeli shipping magnate, Sammy Ofer
Sammy Ofer
Sammy Ofer KBE was a businessman, shipping tycoon and one of the wealthiest people in Israel, although most of his time he spent abroad, and managed his businesses from Monte Carlo in Monaco...
, has given the Museum, £20M for a new gallery. Mr Ofer who has close contacts with the London shipping community, was a Royal Naval sailor, and part of his shipping operation is London-based.


Directors of the National Maritime Museum

The award of the medal is associated with the Caird Lecture, a public lecture presented by the recipient, which is usually published after the lecture. 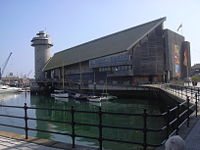