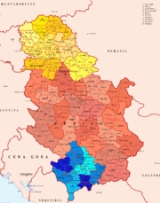 Of the 150 municipalities, 83 are located in Central Serbia
Central Serbia
Central Serbia , also referred to as Serbia proper , was the region of Serbia from 1945 to 2009. It included central parts of Serbia outside of the autonomous provinces of Kosovo and Vojvodina. The region of Central Serbia was not an administrative division of Serbia as such; it was under the...
, 39 in Vojvodina
Vojvodina
Vojvodina, officially called Autonomous Province of Vojvodina is an autonomous province of Serbia. Its capital and largest city is Novi Sad...
and 28 in Kosovo
Kosovo
Kosovo is a region in southeastern Europe. Part of the Ottoman Empire for more than five centuries, later the Autonomous Province of Kosovo and Metohija within Serbia...
. Of the 24 cities, 17 are in Central Serbia, 6 are in Vojvodina and 1 in Kosovo.

Like in many other countries, municipalities are the basic entities of local self-government
Local self-government
Local self-government is a form of public administration, such that the inhabitants of a certain territory form a community that is recognized by the central government and has a specific legal status and was originated by the Anglo-Saxons.-See also:...
in Serbia. The head of the municipality is the President of the municipality, while the executive power is held by the Municipality council, and legislative power by the Municipality assembly. Municipality assembly is elected on local elections (held every 4 years), while the President and the Council are elected by the Assembly. Municipalities have their own property (including public service
Public services
Public services is a term usually used to mean services provided by government to its citizens, either directly or by financing private provision of services. The term is associated with a social consensus that certain services should be available to all, regardless of income...
companies) and budget. Only the cities officially have mayor
Mayor
In many countries, a Mayor is the highest ranking officer in the municipal government of a town or a large urban city....
s (gradonačelnici), although the municipality presidents are often informally referred to as such.

Advocates of reform of Serbian local self-government system point out that Serbian municipalities (with 50,000 citizens in average) are the largest in Europe
Europe
Europe is, by convention, one of the world's seven continents. Comprising the westernmost peninsula of Eurasia, Europe is generally 'divided' from Asia to its east by the watershed divides of the Ural and Caucasus Mountains, the Ural River, the Caspian and Black Seas, and the waterways connecting...
, both by territory and number of citizens, and as such can be inefficient in handling citizens' needs and distributing the income from the country budget into most relevant projects.

Cities are another type of local self-government. The territory with the city status usually has more than 100,000 inhabitants, but is otherwise very similar to municipality. There are 24 cities (gradovi), each having an assembly and budget of its own. Only the cities have mayors (gradonačelnik), although the presidents of the municipalities are often referred to as "mayors" in everyday usage.

As with a municipality, the territory of a city is composed of a city proper and surrounding villages (e.g. the territory of the City of Subotica is composed of the Subotica
Subotica
Subotica is a city and municipality in northern Serbia, in the Autonomous Province of Vojvodina...
town and surrounding villages). Every city (and municipality) is part of a district
Districts of Serbia
Districts , officially called administrative districts are the administrative units of Serbia, comprising several municipalities and/or cities each. They are defined by the Government of Serbia's Enactment of 29 January 1992. Districts are regional centers of state authority and they do not have...
. The only exception is the City of Belgrade, which is a district on its own.

The city may or may not be divided into city municipalities. Five cities: Belgrade
Belgrade
Belgrade is the capital and largest city of Serbia. It is located at the confluence of the Sava and Danube rivers, where the Pannonian Plain meets the Balkans. According to official results of Census 2011, the city has a population of 1,639,121. It is one of the 15 largest cities in Europe...
, Novi Sad
Novi Sad
Novi Sad is the capital of the northern Serbian province of Vojvodina, and the administrative centre of the South Bačka District. The city is located in the southern part of Pannonian Plain on the Danube river....
, Niš
Niš
Niš is the largest city of southern Serbia and third-largest city in Serbia . According to the data from 2011, the city of Niš has a population of 177,972 inhabitants, while the city municipality has a population of 257,867. The city covers an area of about 597 km2, including the urban area,...
, Kragujevac
Kragujevac
Kragujevac is the fourth largest city in Serbia, the main city of the Šumadija region and the administrative centre of Šumadija District. It is situated on the banks of the Lepenica River...
and Požarevac
Požarevac
Požarevac is a city and municipality in eastern Serbia. It is the administrative center of the Braničevo District of Serbia...
comprise several city municipalities, divided into "urban" (in the city proper) and "other" (suburban). Of those, only Novi Sad did not undergo the full transformation, as the newly formed municipality of Petrovaradin
Petrovaradin
Petrovaradin , is part of the agglomeration of Novi Sad in Serbia...
exists pretty much only formally; thus, the Municipality of Novi Sad is largely equated to City of Novi Sad. Competences of cities and city municipalities are divided. The city municipalities of the five cities above mentioned also have their assemblies and other prerogatives.


Municipalities and cities of Kosovo

Serbian laws treat Kosovo
Kosovo
Kosovo is a region in southeastern Europe. Part of the Ottoman Empire for more than five centuries, later the Autonomous Province of Kosovo and Metohija within Serbia...
as integral part of Serbia (Autonomous Province of Kosovo and Metohija). The law on territorial organisation defines 28 municipalities and 1 city on the territory of Kosovo. But, since 1999, Kosovo is under United Nations' administration of UNMIK. The UNMIK administration changed territorial organisation on the territory of Kosovo. In 2000 the municipality of Gora
Gora
Gora may refer to:*Gora , a clan of Jats found in north India*Gora or gaura, a Hindi and Indo-Aryan word for a light-skinned person*Gora , by Indian Nobel laureate Rabindranath Tagore...
was merged with Opolje
Opolje
Opolje or Opoja is northern region of the municipality of Dragaš in the southern most part of Kosovo with Gora being the southern one.Opolje comprises 19 villages with a population of 30.000 . Its population is almost exclusively of Albanian ethnicity, whereas the population of Gora is Gorani...
(part of the Municipality of Prizren
Prizren
Prizren is a historical city located in southern Kosovo. It is the administrative center of the eponymous municipality and district.The city has a population of around 131,247 , mostly Albanians...
) into the new municipality of Dragaš
Dragaš
Dragaš is a town and municipality in the Prizren district of southern Kosovo. The population of the town is approximately 33,584, that of the whole municipality is estimated at 33,584...
and one new municipality was created: Mališevo
Mališevo
Mališevo is a town and municipality in the Prizren District of central Kosovo...
. Later, from 2005 to 2008, seven new municipalities were created: Gračanica
Gracanica, Kosovo
Gračanica is a town and municipality in central Kosovo, and a Serb enclave centered around the Gračanica monastery, located ten kilometers away from Pristina...
, Đeneral Janković, Junik
Junik
Junik is a municipality and small town in the Đakovica district of western Kosovo. It is located in the west Metohija between Dečani and Đakovica along Kosovo's mountainous border with Albania. It is populated with ethnic Albanians...
, Parteš
Parteš
Parteš is a town and one of the new municipalities in Kosovo. It is a Serb enclave. It is located south-west of Gnjilane.-Settlements in Municipality:There are only three settlements in the municipality.* Parteš* Pasjane* Budriga...
, Klokot-Vrbovac
Klokot-Vrbovac
Klokot or Kllokot , officially Klokot-Vrbovac , is a municipality in Kosovo and a Serb enclave, centered around the towns of Klokot and Vrbovac. It became municipality in 2008, previously being part of the Vitina Municipality. The seat of the municipality is in Klokot...
, Ranilug
Ranilug
Ranilug is a town and Serb enclave in Kosovo. It is set to become a municipality.In 2011, Ranilug was part of a group of 17 villages with a population of 3,785 Serbs surrounded by Albanian-populated areas...
and Mamuša
Mamuša
Mamuša or Mamusha is a town in Kosovo. In 2008 it became a municipality. Prior to that it was part of Prizren municipality. Of all municipal units in Kosovo, this one is by far the smallest in terms of area.-Location:...
. Serbian government does not recognize this move, although some of these new-formed municipalities have Serb majority, and some Serbs participate in local elections. In three of those municipalities: Gračanica, Klokot-Vrbovac and Ranilug, Serbian parties won majority in the 2009 elections
Kosovan local elections, 2009
Local elections were held in Kosovo on 15 November and 13 December 2009. These were the first local elections to be held after Kosovo declared independence in February 2008. The elections were to elect mayors and municipal councils in 36 municipalities, and were contested by 37 ethnic Albanian...
.