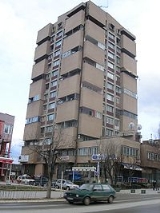 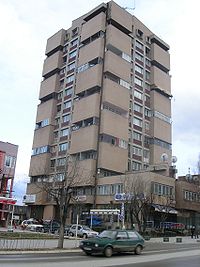 Gnjilane or Gjilan is a city and municipality
Municipalities of Kosovo
A Municipality is the basic administrative division in Kosovo.-List of Municipalities:The first name is Serbian and the second one is Albanian:* Dečani / Deçan* Dragaš / Dragash* Đakovica / Gjakovë* Glogovac / Gllogovc * Gnjilane / Gjilan...
in eastern Kosovo
Kosovo
Kosovo is a region in southeastern Europe. Part of the Ottoman Empire for more than five centuries, later the Autonomous Province of Kosovo and Metohija within Serbia...
. It is the administrative center of the District of Gjilan. It is famous for having been recorded the lowest temperature in Kosovo with -32.5 °C on 25 January 1963.

The origin of the town's name is disputed. Albanian sources claim that the town was originally established in 1572 by the Gjinolli family, who arrived from Novo Brdo
Novo Brdo
Novo Brdo is a town and municipality in the Pristina district of eastern Kosovo. The population of the municipality is estimated at 6,720 people .-History:...
, one of the most important late-medieval cities in the central Balkans. However, there is no definite evidence to support that claim, and in fact no one can confirm as to who the first true inhabitants were, or when they first settled there.

In the Middle Ages the city was called Morava and was a major trade and industrial center. Gnjilane was often visited by the Serbian rulers, and the first written records about it, is the 1342. year, directly related to the residence of King Stefan Dusan. The present name of the town was first mentioned in the late 14th century in a charter of Serbian princess Milica, wife of Prince Lazar. However, the first data concerning the existence of inhabited places in the area appear in the first half of the fourteenth century and the reign of Tsar Stefan Dusan, who also visited Ružica (as at that time was called Gnjilane) around 1351. year and crossed the famous bridge on the river Masketarovog Dobrusha, downtown, and thus forever marked the history of this Serbian village.

In 1915, in and around the city, the Serbian
Kingdom of Serbia
The Kingdom of Serbia was created when Prince Milan Obrenović, ruler of the Principality of Serbia, was crowned King in 1882. The Principality of Serbia was ruled by the Karađorđevic dynasty from 1817 onwards . The Principality, suzerain to the Porte, had expelled all Ottoman troops by 1867, de...
army made a futile stand against the 1st Army of Bulgaria
Kingdom of Bulgaria
The Kingdom of Bulgaria was established as an independent state when the Principality of Bulgaria, an Ottoman vassal, officially proclaimed itself independent on October 5, 1908 . This move also formalised the annexation of the Ottoman province of Eastern Rumelia, which had been under the control...
, during the World War I
World War I
World War I , which was predominantly called the World War or the Great War from its occurrence until 1939, and the First World War or World War I thereafter, was a major war centred in Europe that began on 28 July 1914 and lasted until 11 November 1918...
Battle of Kosovo
Battle of Kosovo (1915)
The Kosovo Offensive Operation , the third major battle in history to have been fought there, occurred between 10 November 1915 and 4 December 1915.-Battle and Serbian defeat:...
. That battle resulted in the ultimate defeat of the Serbian military, and the occupation by the forces allied with the then German Empire
German Empire
The German Empire refers to Germany during the "Second Reich" period from the unification of Germany and proclamation of Wilhelm I as German Emperor on 18 January 1871, to 1918, when it became a federal republic after defeat in World War I and the abdication of the Emperor, Wilhelm II.The German...
. In World War II
World War II
World War II, or the Second World War , was a global conflict lasting from 1939 to 1945, involving most of the world's nations—including all of the great powers—eventually forming two opposing military alliances: the Allies and the Axis...
there was a significant amount of activity in and around Gnjilane by the Partisans fighting against Nazi Germany
Nazi Germany
Nazi Germany , also known as the Third Reich , but officially called German Reich from 1933 to 1943 and Greater German Reich from 26 June 1943 onward, is the name commonly used to refer to the state of Germany from 1933 to 1945, when it was a totalitarian dictatorship ruled by...
and her allies. Monument
Monument
A monument is a type of structure either explicitly created to commemorate a person or important event or which has become important to a social group as a part of their remembrance of historic times or cultural heritage, or simply as an example of historic architecture...
s to these actions can still be found today, one of which is located in the middle of the village of Koretiste. In 1999, Camp Monteith
Camp Monteith
Camp Monteith was a military base near Gnjilane, Kosovo and located about east of Camp Bondsteel. A former Serb artillery outpost and 79 parcels of private land, the area was taken over by U.S. Marines and used as a base of operation during the Kosovo War of 1999. The camp was named after Jimmie...
was established outside the city as a base of operations for KFOR during Operation Joint Guardian, on the site of a destroyed Serbian
Military of Serbia
The Serbian Armed Forces are the armed services of Serbia. They consist of the Serbian Army and the Serbian Air Force and Air Defence...
military base which is handed over to Kosovo Protection Corps
Kosovo Protection Corps
The Kosovo Protection Corps was a civilian emergency services organisation in Kosovo active from 1999 to 2009.The KPC was created on September 21, 1999 through the promulgation of UNMIK Regulation 1999/8 and the agreement of a "Statement of Principles" on the KPC's permitted role in Kosovo...
in 2007 after U.S. Military downsized their troops. Gnjilane has also served as the regional headquarters
Headquarters
Headquarters denotes the location where most, if not all, of the important functions of an organization are coordinated. In the United States, the corporate headquarters represents the entity at the center or the top of a corporation taking full responsibility managing all business activities...
of the UNMIK
United Nations Interim Administration Mission in Kosovo
The United Nations Interim Administration Mission in Kosovo or UNMIK is the interim civilian administration in Kosovo, under the authority of the United Nations. The mission was established on 10 June 1999 by Security Council Resolution 1244...
International Police
International Police
The International Police is the title used for an organization of police officers representing various countries throughout the world, brought together to assist in the training, organization, stabilization of a destabilized region, or creation of indigenous police forces primarily in war-torn...
task force from 1999.

In Mars 2011, the Gnjilane municipality was estimated to have over 90,015 residents. The vast majority of the population is Albanian, followed by Serbs, and a small number of minorities.

In Gnjilane Municipality Albanian
Albanian language
Albanian is an Indo-European language spoken by approximately 7.6 million people, primarily in Albania and Kosovo but also in other areas of the Balkans in which there is an Albanian population, including western Macedonia, southern Montenegro, southern Serbia and northwestern Greece...
, Serbian
Serbian language
Serbian is a form of Serbo-Croatian, a South Slavic language, spoken by Serbs in Serbia, Bosnia and Herzegovina, Montenegro, Croatia and neighbouring countries....
and Turkish
Turkish language
Turkish is a language spoken as a native language by over 83 million people worldwide, making it the most commonly spoken of the Turkic languages. Its speakers are located predominantly in Turkey and Northern Cyprus with smaller groups in Iraq, Greece, Bulgaria, the Republic of Macedonia, Kosovo,...
languages are official languages.

There are 3,700 registered private businesses in the municipality employing 7,900 people. Before 1999, Gnjilane was an important industrial centre in Kosovo. Still in operation are the radiator factory and tobacco factory, which has been recently privatized. The new city business incubator, supported by the European Agency for Reconstruction, was inaugurated in Summer 2007.

Gjilani is home to the Basketball
Basketball
Basketball is a team sport in which two teams of five players try to score points by throwing or "shooting" a ball through the top of a basketball hoop while following a set of rules...
club Drita Gjilan, the football clubs KF Gjilani
KF Gjilani
KF Gjilani is a professional football club based in Gjilan, Kosovo. It was founded in 1995 and currently play in the Raiffeisen Superliga of Kosovo.- History :...
and KF Drita
KF Drita
KF Drita is a football club based in Gjilan, Kosovo . Created in 1947, the club has won first league Raiffeisen Football Superleague of Kosovo in 2002/2003 and Kosova Cup in 2000/2001...
and Volleyball club KV Drita, male and female- the most successful club in Gnjilane's history.