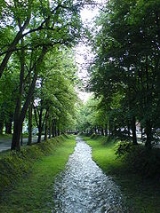 Encyclopedia
Vrnjačka Banja is a town, municipality, and a resort, mineral spa
Spa
The term spa is associated with water treatment which is also known as balneotherapy. Spa towns or spa resorts typically offer various health treatments. The belief in the curative powers of mineral waters goes back to prehistoric times. Such practices have been popular worldwide, but are...
located in Raška District
Raška District
The Raška District expands in the south-western part of Serbia. It has a population of 300,274. Its seat is in the city of Kraljevo.-Municipalities:It encompasses the municipalities of:*Kraljevo*Vrnjačka Banja*Raška...
of Serbia
Serbia
Serbia , officially the Republic of Serbia , is a landlocked country located at the crossroads of Central and Southeast Europe, covering the southern part of the Carpathian basin and the central part of the Balkans...
. It contains the world's only hot spring with a temperature measuring exactly that of the human body (36.5 degrees Celsius).

Vrnjačka Banja is the most celebrated and most popular spa town of Serbia
Serbia
Serbia , officially the Republic of Serbia , is a landlocked country located at the crossroads of Central and Southeast Europe, covering the southern part of the Carpathian basin and the central part of the Balkans...
and at same time, a very attractive recreative centre. Situated in a great park full of trees with particularly charming houses, the town has a promsing future. Surrounding Vrnjačka Banja are UNESCO
UNESCO
The United Nations Educational, Scientific and Cultural Organization is a specialized agency of the United Nations...
protected medieval buildings, which serve as a reminder to early European civilisation. Other nearby landmarks include the first court of the Serbian Archbishop
Archbishop
An archbishop is a bishop of higher rank, but not of higher sacramental order above that of the three orders of deacon, priest , and bishop...
, the Žiča Monastery
Žica
Žiča is an early 13th century Serb Orthodox monastery near Kraljevo, Serbia. The monastery, together with the Church of the Holy Dormition, was built by the first King of Serbia, Stefan the First-Crowned and the first Head of the Serbian Church, Saint Sava....
and the beautifully frescoed Sopoćani Monastery which both date back to the thirteenth century and the twelfth century Studenica Monastery
Studenica monastery
The Studenica monastery is a 12th-century Serbian Orthodox monastery situated 39 km southwest of Kraljevo, in central Serbia. It is one of the largest and richest Serb Orthodox monasteries....
all of which are nestled in the colourful Ibar River
Ibar River
The Ibar is a river that flows through eastern Montenegro and Serbia, with a total length of . The river begins in the Hajla mountain, eastern Montenegro, passes through Kosovo and flows into the West Morava river, Central Serbia, near Kraljevo....
Valley.

It owes its reputation to its therapeutic effects known already to the Roman
Ancient Rome
Ancient Rome was a thriving civilization that grew on the Italian Peninsula as early as the 8th century BC. Located along the Mediterranean Sea and centered on the city of Rome, it expanded to one of the largest empires in the ancient world....
troops in the second century AD. It was upgraded by the Czech Baron Herder in 1835 after Prince Miloš Obrenović wanted it to be like Karlovy Vary
Karlovy Vary
Karlovy Vary is a spa city situated in western Bohemia, Czech Republic, on the confluence of the rivers Ohře and Teplá, approximately west of Prague . It is named after King of Bohemia and Holy Roman Emperor Charles IV, who founded the city in 1370...
, it has since received people from all of southern Europe, who came to rest or for treatment. Summers are pleasant, and the winter is mild. With organized walks along the tree bordered paths, Vrnjačka Banja is an ideal place to come to for one's own salvation. Natural springs can be found on five mineral water sources well positioned in the park. The warm water (36 degrees Celsius) is ideal for massage, and cool (17 degrees Celsius) sufficiently reviving.

There are seven mineral springs in Vrnjačka Banja, from which first four are used for medical treatment: 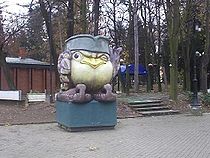 The hotels are numerous and have swimming pools and halls for games. In winter, it is convenient for skiing on the Goc
GOC
GOC may refer to:*Gareth O'Callaghan, Irish author and presenter*General Officer Commanding, a general officer who holds a military command appointment*General Optical Council, an organisation in the United Kingdom that regulates opticians and optometrists...
, just a few kilometres away. In the summer, Vrnjačka Banja is transformed into one of greatest cultural centres in Serbia
Serbia
Serbia , officially the Republic of Serbia , is a landlocked country located at the crossroads of Central and Southeast Europe, covering the southern part of the Carpathian basin and the central part of the Balkans...
: literary soirées in a very nice library of the modern style, classical concerts under the column capitals and the festival of the cinema scenario. The restaurants are often on the border of a water current and offer terraces under the trees of the park.

One of the famous landmarks of Vrnjačka Banja is the Bridge of Love.
----


"At the dawn of the First World War, while the war was not even suspected yet, a schoolmistress Nada and a Serbia
Serbia
Serbia , officially the Republic of Serbia , is a landlocked country located at the crossroads of Central and Southeast Europe, covering the southern part of the Carpathian basin and the central part of the Balkans...
n officer Relja started having deep feelings for each other. They fell in love and made a commitment to each other. It was a love widely talked about, attracting the attention of all the people living at Vrnjacka Banja
Vrnjacka Banja
Vrnjačka Banja is a town, municipality, and a resort, mineral spa located in Raška District of Serbia. It contains the world's only hot spring with a temperature measuring exactly that of the human body ....
Spa. But the war did break out with all the horrors it entails. Relja went off to war fought in Greece. He left never to return on account of a beautiful Greek
Greeks
The Greeks, also known as the Hellenes , are a nation and ethnic group native to Greece, Cyprus and neighboring regions. They also form a significant diaspora, with Greek communities established around the world....
woman he had fallen in love with, and therefore broke up the engagement to Nada. The legend does not say anything about his further fate, whereas, on the other hand, every inhabitant of Vrnjacka Banja spa is familiar with Nada's destiny. Owing to overwhelming sorrow she faded away day after day and finally died, young and miserable. Upset by Nada's destiny, girls, wishing to keep their own romances, started writing down their names along with the names of their lovers on padlock
Padlock
Padlocks are portable locks used to protect against theft, vandalism, sabotage, unauthorized use, and harm. They are designed to protect against some degree of forced and surreptitious entry.- History :...
s that they bound to the railing of the bridge which used to be the favorite meeting place of Nada and Relja. Afterward the keys were symbolically thrown into the river. New wars and sufferings came up. The story fell into oblivion, and the girl's custom to "bind" their love became uncustomary. It had been case until Desanka Maksimović
Desanka Maksimovic
Desanka Maksimović was a Serbian poet, professor of literature, and a member of Serbian Academy of Sciences and Arts.-Biography:...
,according to the stories of old residents of Vrnjacka Banja spa, became acquainted with this tragic story. Inspired by it she wrote down one of her most beautiful love poems "A Prayer for Love", (Molitva za ljubav). Although we tend to forget things, this story remains to be unforgotten, and in order to prolong its existence the young couples kept on with the tradition of "binding" their love and it bridge itself got the name "THE BRIDGE OF LOVE"."

From the Bridge of love history board, next to the bridge.