Encyclopedia
Lithuania
Lithuania
Lithuania , officially the Republic of Lithuania is a country in Northern Europe, the biggest of the three Baltic states. It is situated along the southeastern shore of the Baltic Sea, whereby to the west lie Sweden and Denmark...
is a country, situated in Northern Europe. It is a member of the United Nations
United Nations
The United Nations is an international organization whose stated aims are facilitating cooperation in international law, international security, economic development, social progress, human rights, and achievement of world peace...
, European Union
European Union
The European Union is an economic and political union of 27 independent member states which are located primarily in Europe. The EU traces its origins from the European Coal and Steel Community and the European Economic Community , formed by six countries in 1958...
, Council of Europe
Council of Europe
The Council of Europe is an international organisation promoting co-operation between all countries of Europe in the areas of legal standards, human rights, democratic development, the rule of law and cultural co-operation...
and NATO. As of 2010, it had a population of approximately 3.3 million, and an area of 65300 km² (16,135,967.14 acre; 25,212.47 sq mi). In the 14th century, Lithuania was one of the largest countries in Europe and included present-day Belarus
Belarus
Belarus , officially the Republic of Belarus, is a landlocked country in Eastern Europe, bordered clockwise by Russia to the northeast, Ukraine to the south, Poland to the west, and Lithuania and Latvia to the northwest. Its capital is Minsk; other major cities include Brest, Grodno , Gomel ,...
, Ukraine
Ukraine
Ukraine is a country in Eastern Europe. It has an area of 603,628 km², making it the second largest contiguous country on the European continent, after Russia...
, and parts of Poland
Poland
Poland , officially the Republic of Poland , is a country in Central Europe bordered by Germany to the west; the Czech Republic and Slovakia to the south; Ukraine, Belarus and Lithuania to the east; and the Baltic Sea and Kaliningrad Oblast, a Russian exclave, to the north...
and Russia
Russia
Russia or , officially known as both Russia and the Russian Federation , is a country in northern Eurasia. It is a federal semi-presidential republic, comprising 83 federal subjects...
. A Soviet Socialist Republic starting in 1940, Lithuania initiated a declaration of independence in 1990, and gained widespread international recognition the following year. The country is divided into three layers of administrative division. The first-level division consists of 10 counties
Counties of Lithuania
The territory of Lithuania is divided into 10 counties , all named after their capitals. The counties are divided into 60 municipalities : 9 city municipalities, 43 district municipalities and 8 municipalities...
(Lithuanian
Lithuanian language
Lithuanian is the official state language of Lithuania and is recognized as one of the official languages of the European Union. There are about 2.96 million native Lithuanian speakers in Lithuania and about 170,000 abroad. Lithuanian is a Baltic language, closely related to Latvian, although they...
: singular – apskritis, plural – apskritys). These are sub-divided into 60 municipalities (Lithuanian: plural – savivaldybės, singular – savivaldybė), which in turn are further sub-divided into over 500 smaller groups, known as elderships (Lithuanian: plural – seniūnijos, singular – seniūnija).

At the end of its tenure as a Soviet Socialist Republic, Lithuania's administrative division consisted of 44 regions, 12 cities, 80 towns, 19 settlements, and 426 rural districts. The reform of this system was an immediate concern for the new government. The Constitution of Lithuania
Constitution of Lithuania
The Constitution of the Republic of Lithuania defines the legal foundation for all laws passed in the Republic of Lithuania. It was approved in a referendum on October 25, 1992.-History:...
, ratified in 1992, delegated the power of establishing future administrative units to the Lithuanian Parliament (Seimas
Seimas
The Seimas is the unicameral Lithuanian parliament. It has 141 members that are elected for a four-year term. About half of the members of this legislative body are elected in individual constituencies , and the other half are elected by nationwide vote according to proportional representation...
). Accordingly, the Seimas passed two fundamental laws: a 1993 law on government representation and a 1994 law specifying the territorial-administrative units and their boundaries. The current system of a set of municipalities under 10 counties was codified by 1995. Several changes were made in 2000, resulting in 60 municipalities. Further changes, including a possible increase in the number of municipalities, are still being discussed. Municipal councilors are directly elected every four years. The councilors then elect the municipality's mayor. 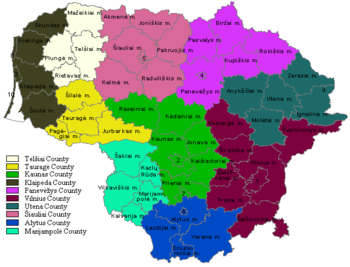