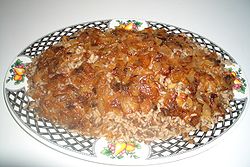 Mujaddara consists of cooked lentil
Lentil
The lentil is an edible pulse. It is a bushy annual plant of the legume family, grown for its lens-shaped seeds...
s together with groats, generally rice
Rice
Rice is the seed of the monocot plants Oryza sativa or Oryza glaberrima . As a cereal grain, it is the most important staple food for a large part of the world's human population, especially in East Asia, Southeast Asia, South Asia, the Middle East, and the West Indies...
, and garnished with roasted onion
Onion
The onion , also known as the bulb onion, common onion and garden onion, is the most widely cultivated species of the genus Allium. The genus Allium also contains a number of other species variously referred to as onions and cultivated for food, such as the Japanese bunching onion The onion...
s that have been sauteed in olive oil
Olive oil
Olive oil is an oil obtained from the olive , a traditional tree crop of the Mediterranean Basin. It is commonly used in cooking, cosmetics, pharmaceuticals, and soaps and as a fuel for traditional oil lamps...
or butter
Butter
Butter is a dairy product made by churning fresh or fermented cream or milk. It is generally used as a spread and a condiment, as well as in cooking applications, such as baking, sauce making, and pan frying...
.

Mujaddara is the Arabic word for smallpox
Smallpox
Smallpox was an infectious disease unique to humans, caused by either of two virus variants, Variola major and Variola minor. The disease is also known by the Latin names Variola or Variola vera, which is a derivative of the Latin varius, meaning "spotted", or varus, meaning "pimple"...
; the lentils among the rice resemble pockmarks. The first recorded recipe for mujaddara appears in Kitab al-Tabikh
Kitab al-Tabikh
Kitab al-Tabikh or Kitab al-Ṭabīḫ is the name of two early Arab cookbooks:* one written in the 10th century by Ibn Sayyar al-Warraq* one written in 1226 by Muhammad bin Hasan al-Baghdadi...
, a cookbook compiled in 1226 by al-Baghdadi
Muhammad bin Hasan al-Baghdadi
', usually called al-Baghdadi was the compiler of an early Arabic language cookbook of the Abbasid period, كتاب الطبيخ , written in 1226....
in Iraq
Iraq
Iraq ; officially the Republic of Iraq is a country in Western Asia spanning most of the northwestern end of the Zagros mountain range, the eastern part of the Syrian Desert and the northern part of the Arabian Desert....
. Containing rice, lentils, and meat, it was served this way during celebrations. Without meat, it was a medieval Arab dish
Arab cuisine
Arab cuisine is defined as the various regional cuisines spanning the Arab World, from Morocco and Tunisia to Saudi Arabia, and incorporating Levantine, Egyptian .-History:...
commonly consumed by the poor, reputed to be a derivative of the "mess of pottage
Mess of pottage
The phrase mess of pottage means something of little value, with a pottage being a type of soup. Though it can appear in general use, it is usually associated with the exchange by Esau of his birthright for a meal of lentil stew, as described in Genesis 25:29–34 in the Bible...
" Jacob
Jacob
Jacob "heel" or "leg-puller"), also later known as Israel , as described in the Hebrew Bible, the Talmud, the New Testament and the Qur'an was the third patriarch of the Hebrew people with whom God made a covenant, and ancestor of the tribes of Israel, which were named after his descendants.In the...
used to buy Esau
Esau
Esau , in the Hebrew Bible, is the oldest son of Isaac. He is mentioned in the Book of Genesis, and by the minor prophets, Obadiah and Malachi. The New Testament later references him in the Book of Romans and the Book of Hebrews....
's birthright. A saying in the Eastern Arab world perhaps inspired by the Biblical story is, "A hungry man would be willing to sell his soul for his a dish of mujaddara."

Cooked lentils are popular all over the Middle East
Middle East
The Middle East is a region that encompasses Western Asia and Northern Africa. It is often used as a synonym for Near East, in opposition to Far East...
and form the basis of many dishes. Mujaddara is a popular dish throughout the Arab world
Arab world
The Arab world refers to Arabic-speaking states, territories and populations in North Africa, Western Asia and elsewhere.The standard definition of the Arab world comprises the 22 states and territories of the Arab League stretching from the Atlantic Ocean in the west to the Arabian Sea in the...
, and is generally made using brown (sometimes green) lentils and rice, that can be seasoned with cumin
Cumin
Cumin is a flowering plant in the family Apiaceae, native from the east Mediterranean to India. Its seeds are used in the cuisines of many different cultures, in both whole and ground form.-Etymology:...
, coriander
Coriander
Coriander is an annual herb in the family Apiaceae. Coriander is native to southern Europe and North Africa to southwestern Asia. It is a soft, hairless plant growing to tall. The leaves are variable in shape, broadly lobed at the base of the plant, and slender and feathery higher on the...
, or mint
MiNT
MiNT is a free software alternative operating system kernel for the Atari ST and its successors. Together with the free system components fVDI , XaAES , and TeraDesk , MiNT provides a free TOS compatible replacement OS that is capable of multitasking.MiNT was originally released by Eric Smith as...
. It is topped with fried onions and is generally served with yogurt, among other other vegetables and side dishes, either hot or cold.

When made with brown lentils and rice, it is known as mudardara in Lebanon; imjadra there generally refers to a dish made with green (and sometimes brown) lentils and bulgur
Bulgur
Bulgur is a cereal food made from several different wheat species, most often from durum wheat. In the United States it is most often made from white wheat. Its use is most common in Middle Eastern cuisine, Iran, Turkey, Greece, Armenia and Bulgaria...
; it is also topped with fried onions, melted butter, and served with yogurt.

Arab Christians
Arab Christians
Arab Christians are ethnic Arabs of Christian faith, sometimes also including those, who are identified with Arab panethnicity. They are the remnants of ancient Arab Christian clans or Arabized Christians. Many of the modern Arab Christians are descendants of pre-Islamic Christian Arabian tribes,...
traditionally eat mujaddara during Lent. The dish is also popular among Jewish communities of Middle Eastern origin, in particular those of Syrian
Syrian Jews
Syrian Jews are Jews who inhabit the region of the modern state of Syria, and their descendants born outside Syria. Syrian Jews derive their origin from two groups: from the Jews who inhabited the region of today's Syria from ancient times Syrian Jews are Jews who inhabit the region of the modern...
and Egyptian
History of the Jews in Egypt
Egyptian Jews constitute both one of the oldest and youngest Jewish communities in the world. While no exact census exists, the Jewish population of Egypt was estimated at fewer than a hundred in 2004, down from between 75,000 and 80,000 in 1922. The historic core of the indigenous community...
backgrounds; it is generally made with rice rather than wheat. It is sometimes nicknamed "Esau's favourite". Jews traditionally ate it twice a week: hot on Thursday evening, and cold on Sunday
Sunday
Sunday is the day of the week between Saturday and Monday. For most Christians, Sunday is observed as a day for worship of God and rest, due to the belief that it is Lord's Day, the day of Christ's resurrection....
.

In Egyptian cuisine
Egyptian cuisine
Egyptian cuisine consists of the local culinary traditions of Egypt. Egyptian cuisine makes heavy use of legumes and vegetables, as Egypt's rich Nile Valley and Delta produce large quantities of high-quality crops.- History and characteristics :...
, lentils, rice, macaroni
Macaroni
Macaroni is a variety of moderately extended, machine-made, dry pasta made with durum wheat. Macaroni noodles do not contain eggs, and are normally cut in short, hollow shapes; however, the term refers not to the shape of the pasta, but to the kind of dough from which the noodle is made...
, and tomato sauce cooked together are known as kushari
Kushari
Kushari, also koshary, kosheri or koshari, is an Egyptian dish of rice, lentils, chickpeas and macaroni. Toppings include tomato sauce, garlic sauce and fried onion.Kushari is a vegetarian dish that is very popular in Egypt...
. In Indian cuisines, lentils cooked together with rice are known as khichdi
Khichdi
Khichṛī , alternate spellings khichdi, khichri, khichdee, khichadi, khichuri, khichari, "kitcheree", "kitchree", and many other variants, is a South Asian preparation made from rice and lentils...
(see also kedgeree
Kedgeree
Kedgeree is a dish consisting of cooked, flaked fish , boiled rice, parsley, hard-boiled eggs, curry powder, butter or cream and occasionally sultanas.Kedgeree is thought to have originated with an Indian rice-and-bean or rice-and-lentil dish Khichri, traced back to 1340 or...
).