Encyclopedia
Much Hadham is a village
Village
A village is a clustered human settlement or community, larger than a hamlet with the population ranging from a few hundred to a few thousand , Though often located in rural areas, the term urban village is also applied to certain urban neighbourhoods, such as the West Village in Manhattan, New...
and civil parish in the district
Non-metropolitan district
Non-metropolitan districts, or colloquially shire districts, are a type of local government district in England. As created, they are sub-divisions of non-metropolitan counties in a so-called "two-tier" arrangement...
of East Hertfordshire
East Hertfordshire
East Hertfordshire is a local government district in Hertfordshire, England. Its council has offices in Bishop's Stortford and Hertford ....
, Hertfordshire
Hertfordshire
Hertfordshire is a ceremonial and non-metropolitan county in the East region of England. The county town is Hertford.The county is one of the Home Counties and lies inland, bordered by Greater London , Buckinghamshire , Bedfordshire , Cambridgeshire and...
, England
England
England is a country that is part of the United Kingdom. It shares land borders with Scotland to the north and Wales to the west; the Irish Sea is to the north west, the Celtic Sea to the south west, with the North Sea to the east and the English Channel to the south separating it from continental...
, formerly known as Great Hadham. It is situated on the B1004 road, midway between Ware and Bishop's Stortford
Bishop's Stortford
Bishop's Stortford is a historic market town and civil parish in the district of East Hertfordshire in the county of Hertfordshire in England. It is situated just west of the M11 motorway, on the county boundary with Essex and is the closest large town to London Stansted Airport and part of the...
. At the 2001 census the population recorded was 1,994.

The village is stretched along the mile long length of its main street (High Street, Tower Hill and Widford Road). Few retail outlets remain apart from two public house
Public house
A public house, informally known as a pub, is a drinking establishment fundamental to the culture of Britain, Ireland, Australia and New Zealand. There are approximately 53,500 public houses in the United Kingdom. This number has been declining every year, so that nearly half of the smaller...
s, a small supermarket with a post office, a hairdresser, two garages and a nursery
Nursery (horticulture)
A nursery is a place where plants are propagated and grown to usable size. They include retail nurseries which sell to the general public, wholesale nurseries which sell only to businesses such as other nurseries and to commercial gardeners, and private nurseries which supply the needs of...
. Recently the radio shop next to the Red Lion closed, though 'Much Hadham Radio Ltd' is still operating. In the High Street, residential house names show former commercial or public use, eg, "Old Bakery", "Collarmaker's House" and "The Forge" Museum. The village was served by a station on the Buntingford
Buntingford
Buntingford is a small market town and civil parish in the district of East Hertfordshire and county of Hertfordshire in England. It lies on the River Rib and on the Roman road Ermine Street. As a result of its location, it grew mainly as a staging post with many coaching inns and has an 18th...
branch line, but this closed
Beeching Axe
The Beeching Axe or the Beeching Cuts are informal names for the British Government's attempt in the 1960s to reduce the cost of running British Railways, the nationalised railway system in the United Kingdom. The name is that of the main author of The Reshaping of British Railways, Dr Richard...
in 1964, as part of a wider review of rail services.

There is a Church of England maintained primary school and two churches - the parish church
Parish church
A parish church , in Christianity, is the church which acts as the religious centre of a parish, the basic administrative unit of episcopal churches....
and a Congregational church. Much Hadham's parish church, built largely between 1225 and 1450, is notable for being shared between the St. Andrew’s Church of England (Anglican) congregation and the Holy Cross Roman Catholic congregation. The entrance to the church is adorned with two sculptures by Henry Moore
Henry Moore
Henry Spencer Moore OM CH FBA was an English sculptor and artist. He was best known for his semi-abstract monumental bronze sculptures which are located around the world as public works of art....
, who was also a resident in the village until his death in 1986. Other celebrity residents have included Bob Monkhouse
Bob Monkhouse
Robert Alan "Bob" Monkhouse, OBE was an English entertainer. He was a successful comedy writer, comedian and actor and was also well known on British television as a presenter and game show host...
, The Pet Shop Boys, Chas & Dave and Bob Carolgees
Bob Carolgees
Bob Carolgees is a comedy entertainer who appeared on the Saturday morning TV series Tiswas and then later in its adult versions O.T.T. and Saturday Stayback. He is best-known for appearing with a puppet named Spit the Dog.-Career:In the early 1970s Carolgees ran a DJ and modelling school at 11A...
.

Adjacent to the church, is a palace that had been the country home of the Bishops of London
Bishop of London
The Bishop of London is the ordinary of the Church of England Diocese of London in the Province of Canterbury.The diocese covers 458 km² of 17 boroughs of Greater London north of the River Thames and a small part of the County of Surrey...
for 800 years. It may be that the Tudor dynasty
Tudor dynasty
The Tudor dynasty or House of Tudor was a European royal house of Welsh origin that ruled the Kingdom of England and its realms, including the Lordship of Ireland, later the Kingdom of Ireland, from 1485 until 1603. Its first monarch was Henry Tudor, a descendant through his mother of a legitimised...
began here, for Henry V
Henry V of England
Henry V was King of England from 1413 until his death at the age of 35 in 1422. He was the second monarch belonging to the House of Lancaster....
's widow, Catherine of Valois
Catherine of Valois
Catherine of France was the Queen consort of England from 1420 until 1422. She was the daughter of King Charles VI of France, wife of Henry V of Monmouth, King of England, mother of Henry VI, King of England and King of France, and through her secret marriage with Owen Tudor, the grandmother of...
, (Shakespeare's Katharine) gave birth here (or at similarly named Hadham in Bedfordshire) to Edmund Tudor, 1st Earl of Richmond
Edmund Tudor, 1st Earl of Richmond
Edmund Tudor, 1st Earl of Richmond , also known as Edmund of Hadham , was the father of King Henry VII of England and a member of the Tudor family of Penmynydd, North Wales.-Birth and early life:...
, whose son Harry
Henry VII of England
Henry VII was King of England and Lord of Ireland from his seizing the crown on 22 August 1485 until his death on 21 April 1509, as the first monarch of the House of Tudor....
won the throne on Bosworth Field. 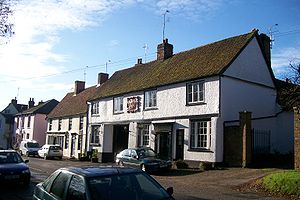 The Red Lion coaching inn, now converted into private houses, has existed in the village since the fifteenth century. It was a stopping point on the old road from London
London
London is the capital city of :England and the :United Kingdom, the largest metropolitan area in the United Kingdom, and the largest urban zone in the European Union by most measures. Located on the River Thames, London has been a major settlement for two millennia, its history going back to its...
to Cambridge
Cambridge
The city of Cambridge is a university town and the administrative centre of the county of Cambridgeshire, England. It lies in East Anglia about north of London. Cambridge is at the heart of the high-technology centre known as Silicon Fen – a play on Silicon Valley and the fens surrounding the...
. Legend has it that a tunnel connected the pub to St. Andrew's, possibly built during the time of Oliver Cromwell
Oliver Cromwell
Oliver Cromwell was an English military and political leader who overthrew the English monarchy and temporarily turned England into a republican Commonwealth, and served as Lord Protector of England, Scotland, and Ireland....
to serve as an escape route for the clergy. The skeleton of an eighteen-year-old woman was discovered bricked up in a fireplace in the inn. It is thought she died after being incarcerated, some time during the nineteenth century.

The village has an active sports association which includes Much Hadham Football Club and Hadham Villa Football Club.

Much Hadham Cricket Club (founded in 1889) withdrew from the Herts & Essex League in 2007 and no longer exists. Sawbridgeworth Cricket club have used the cricket facilities since then.