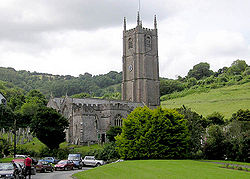 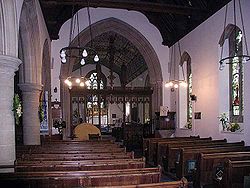 A parish church in Christianity
Christianity
Christianity is a monotheistic religion based on the life and teachings of Jesus as presented in canonical gospels and other New Testament writings...
, is the church
Local church
A local church is a Christian congregation of members and clergy.Local church may also refer to:* Local churches , a Christian group based on the teachings of Watchman Nee and Witness Lee, and associated with the Living Stream Ministry publishing house.* Parish church, a local church united with...
which acts as the religious centre of a parish
Parish
A parish is a territorial unit historically under the pastoral care and clerical jurisdiction of one parish priest, who might be assisted in his pastoral duties by a curate or curates - also priests but not the parish priest - from a more or less central parish church with its associated organization...
, the basic administrative unit of episcopal
Episcopal polity
Episcopal polity is a form of church governance that is hierarchical in structure with the chief authority over a local Christian church resting in a bishop...
churches.

In many parts of the world, especially in rural
Rural
Rural areas or the country or countryside are areas that are not urbanized, though when large areas are described, country towns and smaller cities will be included. They have a low population density, and typically much of the land is devoted to agriculture...
areas, the parish church may play a significant role in community activities, often allowing its premises to be used for non-religious community events.

The church building reflects this status, and there is considerable variety in the size and style of parish churches. Many villages in Europe
Europe
Europe is, by convention, one of the world's seven continents. Comprising the westernmost peninsula of Eurasia, Europe is generally 'divided' from Asia to its east by the watershed divides of the Ural and Caucasus Mountains, the Ural River, the Caspian and Black Seas, and the waterways connecting...
have churches that date back to the Middle Ages
Middle Ages
The Middle Ages is a periodization of European history from the 5th century to the 15th century. The Middle Ages follows the fall of the Western Roman Empire in 476 and precedes the Early Modern Era. It is the middle period of a three-period division of Western history: Classic, Medieval and Modern...
, but all periods of architecture are represented.

Nearly every part of England is in a parish, and most parishes have a parish church
Church of England parish church
A parish church in the Church of England is the church which acts as the religious centre for the people within the smallest and most basic Church of England administrative region, known as a parish.-Parishes in England:...
, which is consecrated
Consecration
Consecration is the solemn dedication to a special purpose or service, usually religious. The word "consecration" literally means "to associate with the sacred". Persons, places, or things can be consecrated, and the term is used in various ways by different groups...
. If there is no parish church, the bishop licenses another building for worship, and may designate it as a Parish Centre of Worship
Parish Centre of Worship
A Parish Centre of Worship is a church or other building licensed as such by the diocesan bishop in the Church of England, usually where there is no parish church. For most purposes it is deemed to be a parish church but it is dedicated, not consecrated, and parishioners have a right to be married...
, a building which is not consecrated, but dedicated, and for most legal purposes it is deemed to be a parish church. In areas of increasing secularisation or a shift in religious beliefs, centres of worship are becoming more common place as often larger churches are sold due to their upkeep costs, instead the church may use community centres or facilities of a local church of another denomination.

In cities without a Cathedral of a certain denomination, the Parish church may have administrative functions similar to that of a cathedral, however the diocese will still have a cathedral.

The Church of Scotland
Church of Scotland
The Church of Scotland, known informally by its Scots language name, the Kirk, is a Presbyterian church, decisively shaped by the Scottish Reformation....
, the established Presbyterian church, also uses a system of parish churches, covering the whole of Scotland
Scotland
Scotland is a country that is part of the United Kingdom. Occupying the northern third of the island of Great Britain, it shares a border with England to the south and is bounded by the North Sea to the east, the Atlantic Ocean to the north and west, and the North Channel and Irish Sea to the...
.
The source of this article is wikipedia, the free encyclopedia.  The text of this article is licensed under the GFDL.