The Moenkopi is a geological formation that is spread across the U.S. state
U.S. state
A U.S. state is any one of the 50 federated states of the United States of America that share sovereignty with the federal government. Because of this shared sovereignty, an American is a citizen both of the federal entity and of his or her state of domicile. Four states use the official title of...
s of New Mexico
New Mexico
New Mexico is a state located in the southwest and western regions of the United States. New Mexico is also usually considered one of the Mountain States. With a population density of 16 per square mile, New Mexico is the sixth-most sparsely inhabited U.S...
, northern Arizona
Arizona
Arizona ; is a state located in the southwestern region of the United States. It is also part of the western United States and the mountain west. The capital and largest city is Phoenix...
, Nevada
Nevada
Nevada is a state in the western, mountain west, and southwestern regions of the United States. With an area of and a population of about 2.7 million, it is the 7th-largest and 35th-most populous state. Over two-thirds of Nevada's people live in the Las Vegas metropolitan area, which contains its...
, southeastern California
California
California is a state located on the West Coast of the United States. It is by far the most populous U.S. state, and the third-largest by land area...
, eastern Utah
Utah
Utah is a state in the Western United States. It was the 45th state to join the Union, on January 4, 1896. Approximately 80% of Utah's 2,763,885 people live along the Wasatch Front, centering on Salt Lake City. This leaves vast expanses of the state nearly uninhabited, making the population the...
and western Colorado
Colorado
Colorado is a U.S. state that encompasses much of the Rocky Mountains as well as the northeastern portion of the Colorado Plateau and the western edge of the Great Plains...
. This unit is considered to be a group in Arizona. Part of the Colorado Plateau
Colorado Plateau
The Colorado Plateau, also called the Colorado Plateau Province, is a physiographic region of the Intermontane Plateaus, roughly centered on the Four Corners region of the southwestern United States. The province covers an area of 337,000 km2 within western Colorado, northwestern New Mexico,...
and Basin and Range, this formation was laid down in the Lower Triassic
Early Triassic
The Early Triassic is the first of three epochs of the Triassic period of the geologic timescale. It spans the time between 251 ± 0.4 Ma and 245 ± 1.5 Ma . Rocks from this epoch are collectively known as the Lower Triassic, which is a unit in chronostratigraphy...
and possibly part of the Middle Triassic
Middle Triassic
In the geologic timescale, the Middle Triassic is the second of three epochs of the Triassic period or the middle of three series in which the Triassic system is divided. It spans the time between 245 ± 1.5 Ma and 228 ± 2 Ma...
. It is red in color and is sandstone. It is about 240 million years old.

There is no designated type locality
Type locality (geology)
Type locality , also called type area or type locale, is the where a particular rock type, stratigraphic unit, fossil or mineral species is first identified....
for this formation. It was named for a development at the mouth of Moenkopi Wash (sic) in the Grand Canyon
Grand Canyon
The Grand Canyon is a steep-sided canyon carved by the Colorado River in the United States in the state of Arizona. It is largely contained within the Grand Canyon National Park, the 15th national park in the United States...
area by Ward in 1901. In 1917 a 'substitute' type locality was located by Gregory in wall of the Little Colorado Canyon, about 5 miles below Tanner Crossing in Coconino County, Arizona
Coconino County, Arizona
-2010:Whereas according to the 2010 U.S. Census Bureau:*61.7% White*1.2% Black*27.3% Native American*1.4% Asian*0.1% Native Hawaiian or Pacific Islander*3.1% Two or more races*5.2% Other races*13.5% Hispanic or Latino -2000:...
. While in the Great Basin, Bassler and Reeside characterized and named the Rock Canyon Conglomerate, Virgin Limestone, and Shnabkaib Shale members in 1921. Salt Creek (later replaced by Wupatki and Moqui Members) and the Holbrook Member were found and named in Black Mesa basin by Hager in 1922. The Sinbad Limestone Member was named in the Paradox Basin by Gilluly and Reeside in 1928. Gregory named the Timpoweap Member named in Plateau sedimentary province in 1948. Wupatki Member was first used in Plateau sedimentary province and its age was modified to Early and Middle(?) Triassic by McKee in 1951. Contacts were revised by Robeck in 1956 and Cooley in 1958. Tenderfoot, Ali Baba, Sewemup, and Pariott Members were named in Piceance and Uinta Basins by Shoemaker and Newman in 1959. Hoskinnini Member was assigned in the Black Mesa and Paradox basins by Stewart in 1959. Contacts revised again by Schell and Yochelson in 1966. Blakey named Black Dragon, Torrey, and Moody Canyon members in the Paradox Basin and Plateau sedimentary province in 1974. Contacts revised yet again by Welsh and others in 1979. Kietzke modified the age to Early and Middle Triassic using biostratigraphic dating in 1988. The Anton Chico Member was assigned in Palo Duro Basin and areal limits set by Lucas and Hunt in 1989. In 1991 areal limits were set again by Lucas and Hayden. An overview was completed by Lucas in 1991, Sprinkel in 1994, Hintze and Axen in 1995 and later, Huntoon and others.

Members are (in alphabetical order):

Found in these geologic locations: 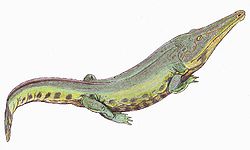 A diverse vertebrate fauna has been described from the Moenkopi Formation, mainly from the Wupatki Member and Holbrook Member of northern Arizona. Described basal vertebrates include freshwater hybodont shark
Shark
Sharks are a type of fish with a full cartilaginous skeleton and a highly streamlined body. The earliest known sharks date from more than 420 million years ago....
s, coelacanth
Coelacanth
Coelacanths are members of an order of fish that includes the oldest living lineage of Sarcopterygii known to date....
s, and lungfish
Lungfish
Lungfish are freshwater fish belonging to the Subclass Dipnoi. Lungfish are best known for retaining characteristics primitive within the Osteichthyes, including the ability to breathe air, and structures primitive within Sarcopterygii, including the presence of lobed fins with a well-developed...
. Temnospondyl amphibian
Amphibian
Amphibians , are a class of vertebrate animals including animals such as toads, frogs, caecilians, and salamanders. They are characterized as non-amniote ectothermic tetrapods...
s are a common component of the fauna. Temnospondyli
Temnospondyli
Temnospondyli is a diverse order of small to giant tetrapods—often considered primitive amphibians—that flourished worldwide during the Carboniferous, Permian, and Triassic periods. A few species continued into the Cretaceous. Fossils have been found on every continent...
include Eocyclotosaurus
Eocyclotosaurus
Eocyclotosaurus is an extinct genus of mastodonsauroid temnospondyl....
, Quasicyclotosaurus
Quasicyclotosaurus
Quasicyclotosaurus is an extinct genus of mastodonsauroid temnospondyl.-See also:* Prehistoric amphibian* List of prehistoric amphibians...
, Wellesaurus
Wellesaurus
Wellesaurus is an extinct genus of mastodonsauroid temnospondyl within the family Mastodonsauridae.-See also:* Prehistoric amphibian* List of prehistoric amphibians...
, Vigilius, and Cosgriffius. Rhynchosaur
Rhynchosaur
Rhynchosaurs were a group of Triassic diapsid reptiles related to the archosaurs.-Description:Rhynchosaurs were herbivores, and at times abundant , with stocky bodies and a powerful beak...
s are known, but rare. Anisodontosaurus is an enigmatic reptile only known from a few tooth-bearing jaws. The poposaurid archosaur Arizonasaurus
Arizonasaurus
Arizonasaurus was a ctenosauriscid archosaur from the Middle Triassic . Arizonasaurus is found in the Middle Triassic Moenkopi Formation of northern Arizona. A fairly complete skeleton was found in 2002 by Sterling Nesbitt. The taxon has a large sailback formed by elongate neural spines of the...
is known from one relatively complete skeleton and a significant amount of other isolated material. Footprints and several fragmentary body fossils are known from dicynodont
Dicynodont
Dicynodontia is a taxon of anomodont therapsids or mammal-like reptiles. Dicynodonts were small to large herbivorous animals with two tusks, hence their name, which means 'two dog tooth'...
s. The footprints of Cheirotherium
Chirotherium
Chirotherium, also known as Cheirotherium , is the name of a Triassic archosaur known only from fossil imprints of its tracks...
and Rhynchosauroides are common in the Wupatki Member.