The primary mission of military intelligence in the United States Army is to provide timely, relevant, accurate, and synchronized intelligence and electronic warfare support to tactical, operational and strategic-level commanders. The Army’s intelligence components produce intelligence both for Army use and for sharing across the national intelligence community.

Approximately 28,000 military personnel and 3,800 civilian personnel are assigned to intelligence duties, comprising the Military Intelligence Corps. Some of the key components include:

In January 1863, Major General
Major General
Major general or major-general is a military rank used in many countries. It is derived from the older rank of sergeant major general. A major general is a high-ranking officer, normally subordinate to the rank of lieutenant general and senior to the ranks of brigadier and brigadier general...
Joseph Hooker
Joseph Hooker
Joseph Hooker was a career United States Army officer, achieving the rank of major general in the Union Army during the American Civil War. Although he served throughout the war, usually with distinction, Hooker is best remembered for his stunning defeat by Confederate General Robert E...
established the Bureau of Military Information
Bureau of Military Information
The Bureau of Military Information was the first formal and organized American intelligence agency, active during the American Civil War.-Predecessors:...
for the Union Army
Union Army
The Union Army was the land force that fought for the Union during the American Civil War. It was also known as the Federal Army, the U.S. Army, the Northern Army and the National Army...
during the Civil War
American Civil War
The American Civil War was a civil war fought in the United States of America. In response to the election of Abraham Lincoln as President of the United States, 11 southern slave states declared their secession from the United States and formed the Confederate States of America ; the other 25...
, headed by George H. Sharpe
George H. Sharpe
George Henry Sharpe was an American lawyer, soldier, secret service officer, diplomat and politician.-Early life:...
. Allan Pinkerton
Allan Pinkerton
Allan Pinkerton was a Scottish American detective and spy, best known for creating the Pinkerton National Detective Agency.-Early life, career and immigration:...
and Lafayette C. Baker
Lafayette C. Baker
Lafayette Curry Baker was a United States investigator and spy, serving for the Union Army, during the American Civil War and under presidents Abraham Lincoln and Andrew Johnson....
handled similar operations for their respective regional commanders. All of those operations were shut down at the end of the Civil War in 1865.

In March 1942, the Military Intelligence Division was reorganized as the Military Intelligence Service (MIS). Originally consisting of just 26 people, 16 of them officers, it was quickly expanded to include 342 officers and 1,000 enlisted personnel and civilians. It was tasked with collecting, analyzing, and disseminating intelligence. Initially it included:
In May 1942, Alfred McCormack established the Special Branch of MIS, which specialized in COMINT. 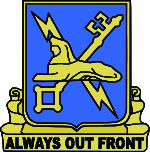 Battlefield Surveillance Brigade
Battlefield Surveillance Brigade
Throughout the history of warfare, soldiers have needed to know who and where the enemy is. In order to address that need in the context of the 21st century threat, the army has planned for the creation and transformation of nine units, in 2007 to the Battlefield Surveillance Brigade format...
s (BfSB) are meant to improve the situational awareness
Situation awareness
Situation awareness, situational awareness, or SA, is the perception of environmental elements with respect to time and/or space, the comprehension of their meaning, and the projection of their status after some variable has changed, such as time...
about the battlefield for commanders at division
Division (military)
A division is a large military unit or formation usually consisting of between 10,000 and 20,000 soldiers. In most armies, a division is composed of several regiments or brigades, and in turn several divisions typically make up a corps...
level or higher, so they can adapt their units combat power for the current operations. For this the Battlefield Surveillance Brigades can deploy unmanned aerial vehicle
Unmanned aerial vehicle
An unmanned aerial vehicle , also known as a unmanned aircraft system , remotely piloted aircraft or unmanned aircraft, is a machine which functions either by the remote control of a navigator or pilot or autonomously, that is, as a self-directing entity...
s, signals gathering equipment, human intelligence collectors
FM 2-22.3 Human Intelligence Collector Operations
Army Field Manual 2 22.3, or FM 2-22.3, Human Intelligence Collector Operations, was issued by the Department of the Army on September 6, 2006. The manual gives instructions on a range of issues, such as the structure, planning and management of human intelligence operations, the debriefing of...
and long range surveillance
Long Range Surveillance
Long Range Surveillance units are specially trained elite Surveillance units of the United States Army that are employed by Military Intelligence Units for gathering information from deep within hostile territories....
patrols.

There are currently three active Battlefield Surveillance Brigade, each supporting one of the three Corps of the US Army: the 201st BfSB at Fort Lewis
Joint Base Lewis-McChord
Joint Base Lewis-McChord is a United States military facility located south-southwest of Tacoma, Washington. The facility is under the jurisdiction of the United States Army Joint Base Garrison, Joint Base Lewis-McChord....
, the 504th BfSB at Fort Hood and the 525th BfSB at Fort Bragg
Fort Bragg (North Carolina)
Fort Bragg is a major United States Army installation, in Cumberland and Hoke counties, North Carolina, U.S., mostly in Fayetteville but also partly in the town of Spring Lake. It was also a census-designated place in the 2010 census and had a population of 39,457. The fort is named for Confederate...
. A fourth brigade is scheduled to activate at Fort Polk
Fort Polk
Fort Polk is a United States Army installation located in Vernon Parish, approximately 7 miles east of Leesville, Louisiana and 20 miles north of DeRidder, Louisiana....
in 2013 but is not yet named. The Army National Guard
Army National Guard
Established under Title 10 and Title 32 of the U.S. Code, the Army National Guard is part of the National Guard and is divided up into subordinate units stationed in each of the 50 states, three territories and the District of Columbia operating under their respective governors...
has additional seven BfSB's.


Creed of the Military Intelligence Corps

I am a Soldier first, but an intelligence professional second to none.

With pride in my heritage, but focused on the future,

Performing the first task of an Army:

To find, know, and never lose the enemy.

With a sense of urgency and of tenacity, professional and physical fitness,

and above all, INTEGRITY, for in truth lies victory.

Always at silent war, while ready for a shooting war,

The silent warrior of the ARMY team.

The United States Army Intelligence Museum is located at Fort Huachuca, Arizona. It features the history of American military intelligence from the Revolutionary War
American Revolution
The American Revolution was the political upheaval during the last half of the 18th century in which thirteen colonies in North America joined together to break free from the British Empire, combining to become the United States of America...
to present.