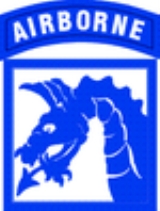 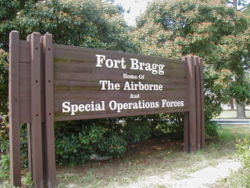 The original plan for 6 brigades was abandoned after World War I ended and once demobilisation had started. The artillery men, their equipment and material from Camp McClellan, Alabama were moved over to Fort Bragg and testing began on long range weapons that were a product of the war. The 6 artillery brigades were reduced to two containments and a garrison was to be built for Army troops as well as a National Guard training center. In early 1921 two field artillery units the 13th and 17th Field Artillery Brigades began training at Camp Bragg.

Due to the post war cutbacks the camp was nearly closed for good when the War department issued orders to close the camp on August 7, 1921. General Albert J. Bowley was commander at the camp and after much campaigning, and getting the Secretary of War to visit the camp, the closing order was cancelled on September 16, 1921. The Field Artillery Board was transferred to Fort Bragg on February 1, 1922.

Camp Bragg was renamed Fort Bragg, to signify becoming a permanent Army post, on September 30, 1922. From 1923 to 1924, permanent structures were constructed on Fort Bragg, including four barracks, which still stand today.

Following World War II, the 82nd Airborne Division was permanently stationed at Fort Bragg, the only large unit there for some time. In July 1951, the XVIII Airborne Corps was reactivated at Fort Bragg. Fort Bragg became a center for unconventional warfare, with the creation of the Psychological Warfare Center in April 1952, followed by the 10th Special Forces Group.

In 1961, the 5th Special Forces Group (Airborne
Airborne forces
Airborne forces are military units, usually light infantry, set up to be moved by aircraft and 'dropped' into battle. Thus they can be placed behind enemy lines, and have an ability to deploy almost anywhere with little warning...
) was activated at Fort Bragg, with the mission of training counter-insurgency forces in Southeast Asia. Also in 1961, the "Iron Mike" statue, a tribute to all Airborne soldiers, past, present and future, was dedicated. More than 200,000 young men underwent basic combat training here during the period 1966–70. At the peak of the Vietnam War in 1968, Fort Bragg's military population rose to 57,840. In June 1972, the 1st Corps Support Command arrived at Fort Bragg.

The 1980s saw a series of deployments of tenant units to the Caribbean
Caribbean
The Caribbean is a crescent-shaped group of islands more than 2,000 miles long separating the Gulf of Mexico and the Caribbean Sea, to the west and south, from the Atlantic Ocean, to the east and north...
, first to Grenada
Invasion of Grenada
The Invasion of Grenada, codenamed Operation Urgent Fury, was a 1983 United States-led invasion of Grenada, a Caribbean island nation with a population of about 100,000 located north of Venezuela. Triggered by a military coup which had ousted a four-year revolutionary government, the invasion...
in 1983, Honduras
Operation Golden Pheasant
Operation Golden Pheasant was an emergency deployment of U.S. troops to Honduras in 1988, as a result of threatening actions by the forces of the Nicaraguans.-History:...
in 1986, and to Panama
United States invasion of Panama
The United States Invasion of Panama, code-named Operation Just Cause, was the invasion of Panama by the United States in December 1989. It occurred during the administration of U.S. President George H. W...
in 1989. The 5th Special Forces Group departed Fort Bragg in the late 1980s. 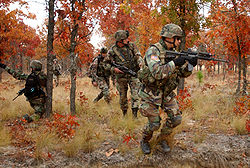 In 1990, the XVIII Airborne Corps along with 82nd Airborne Division deployed to Saudi Arabia in support of Operation Desert Shield and Operation Desert Storm
Gulf War
The Persian Gulf War , commonly referred to as simply the Gulf War, was a war waged by a U.N.-authorized coalition force from 34 nations led by the United States, against Iraq in response to Iraq's invasion and annexation of Kuwait.The war is also known under other names, such as the First Gulf...
. The mid and late 90s saw increased modernization of the facilities in Fort Bragg. The World War II wooden barracks were largely removed, a new main post exchange was built, and Devers Elementary School was opened, along with several other projects. 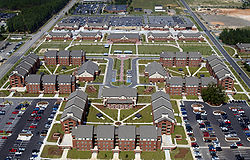 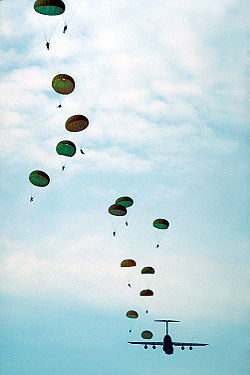 Other units stationed at Fort Bragg include the:

International security website Globalsecurity.org reports that Fort Bragg occupies approximately 160700 acres (650.3 km²) http://www.globalsecurity.org/military/facility/fort-bragg.htm
The base area is the only known locality where the endangered Saint Francis' Satyr butterfly (Neonympha (mitchellii) francisci) occurs. It is found in a few sites within the base perimeter, which are not publicized due to fears of illegal collection by soldiers. The entire known population of this highly distinct subspecies
Subspecies
Subspecies in biological classification, is either a taxonomic rank subordinate to species, ora taxonomic unit in that rank . A subspecies cannot be recognized in isolation: a species will either be recognized as having no subspecies at all or two or more, never just one...
(perhaps a full species
Species
In biology, a species is one of the basic units of biological classification and a taxonomic rank. A species is often defined as a group of organisms capable of interbreeding and producing fertile offspring. While in many cases this definition is adequate, more precise or differing measures are...
) is a few 100 to barely over 1,000 individuals (varying according to climate conditions); in effect, if one in 20 human base occupants were to collect a single butterfly each, the Saint Francis' Satyr would go completely extinct even in those years when it is most plentiful.

The butterfly's survival seems to depend on the North American Beaver (Castor canadensis), which is presently found in some numbers at Fort Bragg, in particular the beavers' damming-up of small creeks and abandoning their works later. The N. m. francisci caterpillar
Caterpillar
Caterpillars are the larval form of members of the order Lepidoptera . They are mostly herbivorous in food habit, although some species are insectivorous. Caterpillars are voracious feeders and many of them are considered to be pests in agriculture...
s seem to feed on Carex mitchelliana sedge
Sedge
- Plants :* Acorus calamus, sweet flag, a plant in the Acoraceae family* Any of the plants in the family Cyperaceae- Animals :* A collective noun for several species of birds, including bitterns, cranes and herons* Sedge-fly, caddisfly- Other uses :...
s which grow at former beaver-ponds before these are in turn overgrown
Ecological succession
Ecological succession, is the phenomenon or process by which a community progressively transforms itself until a stable community is formed. It is a fundamental concept in ecology, and refers to more or less predictable and orderly changes in the composition or structure of an ecological community...
by woodland; possibly they can eat nothing else. The Saint Francis' Satyr's survival depends on maintaining the right proportion of controlled burn
Controlled burn
Controlled or prescribed burning, also known as hazard reduction burning or Swailing is a technique sometimes used in forest management, farming, prairie restoration or greenhouse gas abatement. Fire is a natural part of both forest and grassland ecology and controlled fire can be a tool for...
s and beaver activity; the situation is believed to be stable according to recent studies by NC State
North Carolina State University
North Carolina State University at Raleigh is a public, coeducational, extensive research university located in Raleigh, North Carolina, United States. Commonly known as NC State, the university is part of the University of North Carolina system and is a land, sea, and space grant institution...
, the NCDENR
North Carolina Department of Environment and Natural Resources
The North Carolina Department of Environment and Natural Resources is the state's leading stewardship agency for the preservation and protection of natural resources and public health.- Divisions :* Air Quality* Aquariums...
and the Army's Directorate of Public Works. By and large, the presently-employed habitat management practices seem to ensure the butterfly's survival (presumably as a synergy of the beavers' reintroduced in 1939). To (re)expand the N. m. francisci population to a more secure regional footing, additional measures (e.g. growing C. mitchelliana at Fort Bragg and in surrounding areas) would be necessary.

Fort Bragg fever, a bacterial zoonotic disease, has been named after it.

There are 4,315 households out of which 85.3% have children under the age of 18 living with them, 88.9% are married couples living together, 7.2% have a female householder with no husband present, and 2.3% are non-families. 2.1% of all households are made up of individuals and 0.0% have someone living alone who is 65 years of age or older. The average household size is 3.72 and the average family size is 3.74.