Encyclopedia
Mileševa is a Serbian Orthodox monastery
Monastery
Monastery denotes the building, or complex of buildings, that houses a room reserved for prayer as well as the domestic quarters and workplace of monastics, whether monks or nuns, and whether living in community or alone .Monasteries may vary greatly in size – a small dwelling accommodating only...
located near Prijepolje
Prijepolje
Prijepolje is a town and municipality in the Zlatibor District of Serbia. According to the 2011 census, the municipality of Prijepolje has a population of 36,713 people, while the town itself has a population of 13,068...
, in southwest Serbia
Serbia
Serbia , officially the Republic of Serbia , is a landlocked country located at the crossroads of Central and Southeast Europe, covering the southern part of the Carpathian basin and the central part of the Balkans...
. It was founded by King Vladislav
Stefan Vladislav I of Serbia
Stefan Vladislav I was a Serbian king from 1233/4 to 1243, a son of Stefan Prvovenčani and a grandson of Grand Prince Stefan Nemanja and Anna, the granddaughter of Enrico Dandolo, Doge of Venice....
, in the years between 1234 and 1236. The church has fresco
Fresco
Fresco is any of several related mural painting types, executed on plaster on walls or ceilings. The word fresco comes from the Greek word affresca which derives from the Latin word for "fresh". Frescoes first developed in the ancient world and continued to be popular through the Renaissance...
es by the most skillful artists of that time, including one of the most famous in Serbian culture, the "White Angel
White Angel
White Angel is a detail of a world famous fresco from the Mileševa monastery circa 1230 AD in Serbia, Mironosnice na Hristovom grobu . It is also one of the most famous frescoes in Serbian culture. It depicts an angel sitting in front of the tomb of Christ...
", which depicts an angel on Christ's grave. 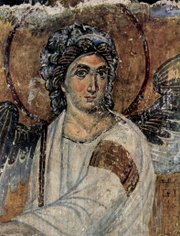 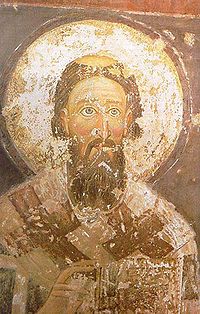 The Mileševa monastery was founded between 1234 and 1236 by Serbian King Vladislav. The monastery is situated in a valley of the Mileševa river, near Prijepolje
Prijepolje
Prijepolje is a town and municipality in the Zlatibor District of Serbia. According to the 2011 census, the municipality of Prijepolje has a population of 36,713 people, while the town itself has a population of 13,068...
. Mileševa is one of the most important Serbian sanctuaries and spiritual centers. In 1236, Vladislav moved the relics of his uncle Saint Sava
Saint Sava
Saint Sava was a Serbian Prince and Orthodox monk, the first Archbishop of the autocephalous Serbian Church, the founder of Serbian law and literature, and a diplomat. Sava was born Rastko Nemanjić , the youngest son of Serbian Grand Župan Stefan Nemanja , and ruled the appanage of Hum briefly in...
from Trnovo
Veliko Tarnovo
Veliko Tarnovo is a city in north central Bulgaria and the administrative centre of Veliko Tarnovo Province. Often referred to as the "City of the Tsars", Veliko Tarnovo is located on the Yantra River and is famous as the historical capital of the Second Bulgarian Empire, attracting many tourists...
in Bulgaria
Bulgaria
Bulgaria , officially the Republic of Bulgaria , is a parliamentary democracy within a unitary constitutional republic in Southeast Europe. The country borders Romania to the north, Serbia and Macedonia to the west, Greece and Turkey to the south, as well as the Black Sea to the east...
, where he died, to Mileševa. Some historians believe that the coronation of King Tvrtko I of Bosnia
Tvrtko I of Bosnia
Stjepan Tvrtko I was a ruler of medieval Bosnia. He ruled in 1353–1366 and again in 1367–1377 as Ban and in 1377–1391 as the first Bosnian King....
took place in Mileševa. In the fifteenth century, the monastery was the seat of the Metropolitanate of Dabar-Bosnia. In 1459, the Turks
Ottoman Empire
The Ottoman EmpireIt was usually referred to as the "Ottoman Empire", the "Turkish Empire", the "Ottoman Caliphate" or more commonly "Turkey" by its contemporaries...
set the monastery on fire, but it was soon restored. In the first half of the sixteenth century, the first service books were illuminated in Mileševa. One of the oldest schools also existed in the monastery. In the middle of the century, during the time of Patriarch Makarije
Makarije Sokolovic
Makarije Sokolović was the Patriarch of the Serbian Orthodox Church from 1557 to 1571. He was the first patriarch of the restored Serbian Patriarchate, after its lapse in 1463 that resulted from the Ottoman conquest of Serbia...
(the Serbian Patriarchate
Serbian Orthodox Church
The Serbian Orthodox Church is one of the autocephalous Orthodox Christian churches, ranking sixth in order of seniority after Constantinople, Alexandria, Antioch, Jerusalem, and Russia...
was restored in 1557), the monastery was thoroughly renovated. Its external narthex was built and painted, and probably cut through the wall between the narthex and the nave. In later times, after several Turkish demolitions, a new restoration was undertaken in 1863, when the church considerably changed in appearance.

The Mileševa monastery has been visited by pilgrims and donated to by Russian Emperors (Ivan IV the Terrible) and Valachian and Moldavia
Moldavia
Moldavia is a geographic and historical region and former principality in Eastern Europe, corresponding to the territory between the Eastern Carpathians and the Dniester river...
n rulers. In 1594, the Turks removed the relics of St. Sava from the monastery and publicly burned them on Vračar
Vracar
Vračar is an urban neighborhood and one of 17 municipalities which constitute the City of Belgrade. With an area of only , it is the smallest of all Belgrade's municipalities, but also the most densely populated. Vračar is one of the three municipalities that constitute the central area of the...
hill in Belgrade
Belgrade
Belgrade is the capital and largest city of Serbia. It is located at the confluence of the Sava and Danube rivers, where the Pannonian Plain meets the Balkans. According to official results of Census 2011, the city has a population of 1,639,121. It is one of the 15 largest cities in Europe...
, making him thus a posthumous martyr
Martyr
A martyr is somebody who suffers persecution and death for refusing to renounce, or accept, a belief or cause, usually religious.-Meaning:...
.

The Church, dedicated to the Ascension of Our Lord, architecturally belongs to the Raška
Raška (state)
Principality of Serbia or Serbian Principality was an early medieval state of the Serbs ruled by the Vlastimirović dynasty, that existed from ca 768 to 969 in Southeastern Europe. It was established through an unification of several provincial chiefs under the supreme rule of a certain Višeslav,...
School. Its ground plan is unique. Its single nave widens from the west eastward, so that the eastern bay is omitted completely, which results in the three altar apses leaning directly on the domed east wall. Inside, the dome is raised on several arches in a stairway-like arrangement. The narthex was added in 1236 upon which, during a nineteenth century restoration, a dome was constructed on top.

The first group of frescoes were produced in the 1230s. The other groups include works from the Turkish period, to be found in the exonarthex. These thirteenth century frescoes may be considered to be the supreme achievement of all the painting in Europe
Europe
Europe is, by convention, one of the world's seven continents. Comprising the westernmost peninsula of Eurasia, Europe is generally 'divided' from Asia to its east by the watershed divides of the Ural and Caucasus Mountains, the Ural River, the Caspian and Black Seas, and the waterways connecting...
of that time. The portraiture deals with bishop
Bishop
A bishop is an ordained or consecrated member of the Christian clergy who is generally entrusted with a position of authority and oversight. Within the Catholic Church, Eastern Orthodox, Oriental Orthodox Churches, in the Assyrian Church of the East, in the Independent Catholic Churches, and in the...
s (altar
Altar
An altar is any structure upon which offerings such as sacrifices are made for religious purposes. Altars are usually found at shrines, and they can be located in temples, churches and other places of worship...
space), warrior saints and martyrs (nave
Nave
In Romanesque and Gothic Christian abbey, cathedral basilica and church architecture, the nave is the central approach to the high altar, the main body of the church. "Nave" was probably suggested by the keel shape of its vaulting...
), as well as monk
Monk
A monk is a person who practices religious asceticism, living either alone or with any number of monks, while always maintaining some degree of physical separation from those not sharing the same purpose...
s (narthex
Narthex
The narthex of a church is the entrance or lobby area, located at the end of the nave, at the far end from the church's main altar. Traditionally the narthex was a part of the church building, but was not considered part of the church proper...
). The upper registers in the narthex represent Christ
Christ
Christ is the English term for the Greek meaning "the anointed one". It is a translation of the Hebrew , usually transliterated into English as Messiah or Mashiach...
's earthly life. Below the resurrection composition on the south wall of the west bay, King Vladislav is depicted as being led to Christ by the Mother of God. The Nemanjić family
House of Nemanjic
The Nemanjić was the most important dynasty of Serbia in the Middle Ages, and one of the most important in Southeastern Europe. The royal house produced eleven Serbian monarchs between 1166 and 1371. It's progenitor was Stephen Nemanja, who descended from a cadet line of the Vukanović dynasty...
is portrayed in the northeastern part of the narthex: Stefan Nemanja
Stefan Nemanja
Stefan Nemanja was the Grand Prince of the Grand Principality of Serbia from 1166 to 1196, a heir of the Vukanović dynasty that marked the beginning of a greater Serbian realm .He is remembered for his contributions to Serbian culture and...
as the monk Simeon, Sava as the first archbishop
Archbishop
An archbishop is a bishop of higher rank, but not of higher sacramental order above that of the three orders of deacon, priest , and bishop...
, Stefan the First-Crowned as king, and his sons Radoslav
Stefan Radoslav of Serbia
Stefan Radoslav was the King of Serbia from 1228 to 1233.- Family :Stefan was the only known son of Stefan Nemanjić by his first wife Eudokia Angelina. His maternal grandparents were Alexios III Angelos, Byzantine Emperor and Euphrosyne Doukaina Kamaterina. He reportedly had two sisters...
and Vladislav. The frescoes in the narthex and the adjacent chapel were presumably painted in the 1230s and 1240s. They illustrate the last Judgment
Last Judgment
The Last Judgment, Final Judgment, Day of Judgment, Judgment Day, or The Day of the Lord in Christian theology, is the final and eternal judgment by God of every nation. The concept is found in all the Canonical gospels, particularly the Gospel of Matthew. It will purportedly take place after the...
and the lives of some saints. In the second half of the sixteenth century, the church was repainted with a new layer of frescoes of which only fragments of the Last Supper
Last Supper
The Last Supper is the final meal that, according to Christian belief, Jesus shared with his Twelve Apostles in Jerusalem before his crucifixion. The Last Supper provides the scriptural basis for the Eucharist, also known as "communion" or "the Lord's Supper".The First Epistle to the Corinthians is...
under the dome and the Forty Martyrs
Forty Martyrs of Sebaste
The Forty Martyrs of Sebaste or the Holy Forty were a group of Roman soldiers in the Legio XII Fulminata whose martyrdom in 320 for the Christian faith is recounted in traditional martyrologies.They were killed near Sebaste, in Lesser Armenia, victims of the persecutions of Licinius,...
in the north choir have survived. These frescoes were damaged in a fire, but they happened to save (acting as a protective layer) the earlier and more valuable paintings from the thirteenth century.