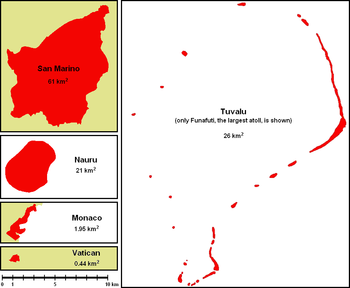 A microstate or ministate is a sovereign state
Sovereign state
A sovereign state, or simply, state, is a state with a defined territory on which it exercises internal and external sovereignty, a permanent population, a government, and the capacity to enter into relations with other sovereign states. It is also normally understood to be a state which is neither...
having a very small population or very small land area, but usually both. Some examples include Liechtenstein
Liechtenstein
The Principality of Liechtenstein is a doubly landlocked alpine country in Central Europe, bordered by Switzerland to the west and south and by Austria to the east. Its area is just over , and it has an estimated population of 35,000. Its capital is Vaduz. The biggest town is Schaan...
, Malta
Malta
Malta , officially known as the Republic of Malta , is a Southern European country consisting of an archipelago situated in the centre of the Mediterranean, south of Sicily, east of Tunisia and north of Libya, with Gibraltar to the west and Alexandria to the east.Malta covers just over in...
, Monaco
Monaco
Monaco , officially the Principality of Monaco , is a sovereign city state on the French Riviera. It is bordered on three sides by its neighbour, France, and its centre is about from Italy. Its area is with a population of 35,986 as of 2011 and is the most densely populated country in the...
, Nauru
Nauru
Nauru , officially the Republic of Nauru and formerly known as Pleasant Island, is an island country in Micronesia in the South Pacific. Its nearest neighbour is Banaba Island in Kiribati, to the east. Nauru is the world's smallest republic, covering just...
, Singapore
Singapore
Singapore , officially the Republic of Singapore, is a Southeast Asian city-state off the southern tip of the Malay Peninsula, north of the equator. An island country made up of 63 islands, it is separated from Malaysia by the Straits of Johor to its north and from Indonesia's Riau Islands by the...
, and Vatican City
Vatican City
Vatican City , or Vatican City State, in Italian officially Stato della Città del Vaticano , which translates literally as State of the City of the Vatican, is a landlocked sovereign city-state whose territory consists of a walled enclave within the city of Rome, Italy. It has an area of...
.

Microstates should not be confused with micronation
Micronation
Micronations, sometimes also referred to as model countries and new country projects, are entities that claim to be independent nations or states but which are not recognized by world governments or major international organizations...
s, which are not recognized as sovereign states. Special territories without full sovereignty, such as the British Crown Dependencies, The Chinese Special Administrative Regions and overseas territories of Denmark
Denmark
Denmark is a Scandinavian country in Northern Europe. The countries of Denmark and Greenland, as well as the Faroe Islands, constitute the Kingdom of Denmark . It is the southernmost of the Nordic countries, southwest of Sweden and south of Norway, and bordered to the south by Germany. Denmark...
, France
France
The French Republic , The French Republic , The French Republic , (commonly known as France , is a unitary semi-presidential republic in Western Europe with several overseas territories and islands located on other continents and in the Indian, Pacific, and Atlantic oceans. Metropolitan France...
, the Netherlands
Netherlands
The Netherlands is a constituent country of the Kingdom of the Netherlands, located mainly in North-West Europe and with several islands in the Caribbean. Mainland Netherlands borders the North Sea to the north and west, Belgium to the south, and Germany to the east, and shares maritime borders...
, Norway
Norway
Norway , officially the Kingdom of Norway, is a Nordic unitary constitutional monarchy whose territory comprises the western portion of the Scandinavian Peninsula, Jan Mayen, and the Arctic archipelago of Svalbard and Bouvet Island. Norway has a total area of and a population of about 4.9 million...
and the United Kingdom
United Kingdom
The United Kingdom of Great Britain and Northern IrelandIn the United Kingdom and Dependencies, other languages have been officially recognised as legitimate autochthonous languages under the European Charter for Regional or Minority Languages...
, are also not considered microstates.

A small number of microstates are founded on historical anomalies or eccentric interpretations of law.
These types of microstates are usually located on small (usually disputed) territorial enclaves, generate limited economic activity founded on tourism
Tourism
Tourism is travel for recreational, leisure or business purposes. The World Tourism Organization defines tourists as people "traveling to and staying in places outside their usual environment for not more than one consecutive year for leisure, business and other purposes".Tourism has become a...
and philatelic and numismatic sales, and are tolerated or ignored by the nations from which they claim to have seceded.

One example is the Republic of Indian Stream
Republic of Indian Stream
The Republic of Indian Stream was a small, unrecognized, constitutional republic in North America, along the section of the US–Canada border that divides the Canadian province of Quebec from the US state of New Hampshire. It existed from July 9, 1832 to 1835...
, now the town of Pittsburg, New Hampshire
Pittsburg, New Hampshire
Pittsburg is a town in Coos County, New Hampshire, United States. The population was 869 at the 2010 census. It is the northernmost town in New Hampshire and the largest town by area in the state - and in New England as well - more than twice the size of the next largest town, Lincoln. U.S...
— A geographic anomaly left unresolved by the Treaty of Paris
Treaty of Paris (1783)
The Treaty of Paris, signed on September 3, 1783, ended the American Revolutionary War between Great Britain on the one hand and the United States of America and its allies on the other. The other combatant nations, France, Spain and the Dutch Republic had separate agreements; for details of...
that ended the U.S. Revolutionary War, and claimed by both the U.S. and Canada. Between 1832 and 1835, the area's residents refused to acknowledge either claimant.

Another example is the Cospaia Republic, which became independent through a treaty error and survived from 1440 to 1826. Its independence made it important in the introduction of tobacco cultivation to Italy.