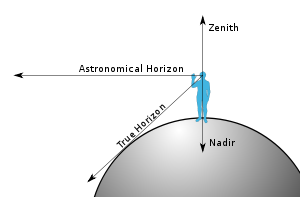 The zenith is an imaginary point directly "above" a particular location, on the imaginary celestial sphere
Celestial sphere
In astronomy and navigation, the celestial sphere is an imaginary sphere of arbitrarily large radius, concentric with the Earth and rotating upon the same axis. All objects in the sky can be thought of as projected upon the celestial sphere. Projected upward from Earth's equator and poles are the...
. "Above" means in the vertical direction opposite to the apparent gravitation
Gravitation
Gravitation, or gravity, is a natural phenomenon by which physical bodies attract with a force proportional to their mass. Gravitation is most familiar as the agent that gives weight to objects with mass and causes them to fall to the ground when dropped...
al force at that location. The opposite direction, i.e. the direction in which the gravitational force pulls, is toward the nadir
Nadir
The nadir is the direction pointing directly below a particular location; that is, it is one of two vertical directions at a specified location, orthogonal to a horizontal flat surface there. Since the concept of being below is itself somewhat vague, scientists define the nadir in more rigorous...
.

The term zenith is sometimes used to refer to the highest point reached by a celestial body during its apparent orbit
Orbit
In physics, an orbit is the gravitationally curved path of an object around a point in space, for example the orbit of a planet around the center of a star system, such as the Solar System...
around a given point of observation. This sense of the word is often used to describe the location of the Sun
Sun
The Sun is the star at the center of the Solar System. It is almost perfectly spherical and consists of hot plasma interwoven with magnetic fields...
("The sun reached its zenith..."), but to an astronomer the sun doesn't have its own zenith, and is at the zenith only if it is directly overhead.

To an astronomer the meridian
Meridian (astronomy)
This article is about the astronomical concept. For other uses of the word, see Meridian.In the sky, a meridian is an imaginary great circle on the celestial sphere. It passes through the north point on the horizon, through the celestial pole, up to the zenith, through the south point on the...
plane is defined by the zenith and the pole, but a geographic meridian is intended to be defined by the Earth's rotational axis, not by its gravitational field. (The two meridians would coincide only for a perfectly rotationally symmetric body.) On Earth, the axis of rotation is not perfectly fixed in the planet (for example due to constant displacements of its fluid components) so that the local vertical direction
Vertical direction
In astronomy, geography, geometry and related sciences and contexts, a direction passing by a given point is said to be vertical if it is locally aligned with the gradient of the gravity field, i.e., with the direction of the gravitational force at that point...
, as defined by the gravity field, is itself changing direction in time (for instance due to lunar and solar tides).

The word "zenith" derives from the inaccurate reading of the Arabic
Arabic language
Arabic is a name applied to the descendants of the Classical Arabic language of the 6th century AD, used most prominently in the Quran, the Islamic Holy Book...
expression سمت الرأس (samt ar-ra's) meaning “direction of the head”/"path above the head", by Medieval Latin
Medieval Latin
Medieval Latin was the form of Latin used in the Middle Ages, primarily as a medium of scholarly exchange and as the liturgical language of the medieval Roman Catholic Church, but also as a language of science, literature, law, and administration. Despite the clerical origin of many of its authors,...
scribes in the Middle Ages
Middle Ages
The Middle Ages is a periodization of European history from the 5th century to the 15th century. The Middle Ages follows the fall of the Western Roman Empire in 476 and precedes the Early Modern Era. It is the middle period of a three-period division of Western history: Classic, Medieval and Modern...
(during the 14th century), probably through Old Spanish. It was incorrectly reduced to 'samt' ("direction") and imprecisely written as 'senit'/'cenit' by those scribes. Through Old French
Old French
Old French was the Romance dialect continuum spoken in territories that span roughly the northern half of modern France and parts of modern Belgium and Switzerland from the 9th century to the 14th century...
'cenith', Middle English
Middle English
Middle English is the stage in the history of the English language during the High and Late Middle Ages, or roughly during the four centuries between the late 11th and the late 15th century....
'senith' and finally 'zenith' first appears in the 17th century.

The Arabic word for zenith is zawal, meaning "decline", that is, when the sun ceases to rise and starts to decline. 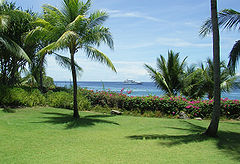 The zenith is used in the following scientific contexts: