Encyclopedia
The Meerwein arylation is an organic reaction
Organic reaction
Organic reactions are chemical reactions involving organic compounds. The basic organic chemistry reaction types are addition reactions, elimination reactions, substitution reactions, pericyclic reactions, rearrangement reactions, photochemical reactions and redox reactions. In organic synthesis,...
involving the addition of an aryl
Aryl
In the context of organic molecules, aryl refers to any functional group or substituent derived from an aromatic ring, be it phenyl, naphthyl, thienyl, indolyl, etc....
diazonium salt (ArN2X) to an electron-poor alkene
Alkene
In organic chemistry, an alkene, olefin, or olefine is an unsaturated chemical compound containing at least one carbon-to-carbon double bond...
usually supported by a metal salt. The reaction product is an alkylated arene compound. The reaction is named after Hans Meerwein
Hans Meerwein
Hans Meerwein was a German chemist.His name is present in the names of several reactions and reagents, for example the Meerwein-Ponndorf-Verley reduction, the Wagner-Meerwein rearrangement...
, one of its inventors who first published it in 1939. 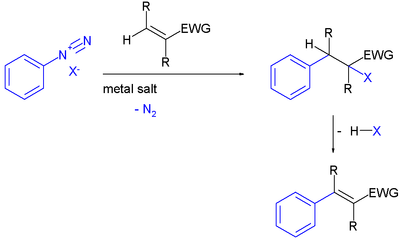 An electron-withdrawing group (EWG) on the alkene makes it electron deficient and although the reaction mechanism
Reaction mechanism
In chemistry, a reaction mechanism is the step by step sequence of elementary reactions by which overall chemical change occurs.Although only the net chemical change is directly observable for most chemical reactions, experiments can often be designed that suggest the possible sequence of steps in...
is unclear , involvement of an aryl radical
Aryl radical
An Aryl radical in organic chemistry is an reactive intermediate and an arene compound incorporating one free radical carbon atom as part of the ring structure. As such it is the radical counterpart of the Arenium ion. The parent compound is the phenyl radical C6H5....
is presumed after loss of nitrogen in the diazonium salt followed by a free radical addition
Free radical addition
Free radical addition is an addition reaction in organic chemistry involving free radicals. The addition may occur between a radical and a non-radical, or between two radicals....
. In the primary reaction product the intermediate alkyl radical is then captured by the diazonium counterion X which is usually a halogen
Halogen
The halogens or halogen elements are a series of nonmetal elements from Group 17 IUPAC Style of the periodic table, comprising fluorine , chlorine , bromine , iodine , and astatine...
or a tetrafluoroborate
Tetrafluoroborate
Tetrafluoroborate is the anion BF4−. This tetrahedral species is isoelectronic with tetrafluoromethane, CF4 and tetrafluoroammonium NF4+, and is valence isoelectronic with many stable and important species including the closely related anion perchlorate, ClO4−...
. In a subsequent step an elimination reaction
Elimination reaction
An elimination reaction is a type of organic reaction in which two substituents are removed from a molecule in either a one or two-step mechanism...
liberates HX (for instance hydrochloric acid
Hydrochloric acid
Hydrochloric acid is a solution of hydrogen chloride in water, that is a highly corrosive, strong mineral acid with many industrial uses. It is found naturally in gastric acid....
) and an aryl vinyl compound is formed. The reaction mechanism from the arene's view ranks as a radical-nucleophilic aromatic substitution
Radical-nucleophilic aromatic substitution
Radical-nucleophilic aromatic substitution or SRN1 in organic chemistry is a type of substitution reaction in which a certain substituent on an aromatic compound is replaced by a nucleophile through an intermediary free radical species:...
.

In a general scope a Meerwein arylation is any reaction between an aryl radical
Aryl radical
An Aryl radical in organic chemistry is an reactive intermediate and an arene compound incorporating one free radical carbon atom as part of the ring structure. As such it is the radical counterpart of the Arenium ion. The parent compound is the phenyl radical C6H5....
and an alkene . The initial intermediate is an aryl enthenyl radical which can react with many trapping reagents such as hydrogen
Hydrogen
Hydrogen is the chemical element with atomic number 1. It is represented by the symbol H. With an average atomic weight of , hydrogen is the lightest and most abundant chemical element, constituting roughly 75% of the Universe's chemical elemental mass. Stars in the main sequence are mainly...
or halogen
Halogen
The halogens or halogen elements are a series of nonmetal elements from Group 17 IUPAC Style of the periodic table, comprising fluorine , chlorine , bromine , iodine , and astatine...
s or with those based on nitrogen
Nitrogen
Nitrogen is a chemical element that has the symbol N, atomic number of 7 and atomic mass 14.00674 u. Elemental nitrogen is a colorless, odorless, tasteless, and mostly inert diatomic gas at standard conditions, constituting 78.08% by volume of Earth's atmosphere...
or sulfur
Sulfur
Sulfur or sulphur is the chemical element with atomic number 16. In the periodic table it is represented by the symbol S. It is an abundant, multivalent non-metal. Under normal conditions, sulfur atoms form cyclic octatomic molecules with chemical formula S8. Elemental sulfur is a bright yellow...
.

A reported reaction of alkene acrylic acid
Acrylic acid
Acrylic acid is an organic compound with the formula CH2=CHCO2H. It is the simplest unsaturated carboxylic acid, consisting of a vinyl group connected directly to a carboxylic acid terminus. This colorless liquid has a characteristic acrid or tart smell. It is miscible with water, alcohols,...
with an aryl diazonium salt and copper(I) bromide
Copper(I) bromide
Copper bromide is the chemical compound with the formula CuBr. This diamagnetic solid adopts a polymeric structure akin to that for zinc sulfide. The compound is widely used in the synthesis of organic compounds....
and hydrobromic acid
Hydrobromic acid
Hydrobromic acid is a strong acid formed by dissolving the diatomic molecule hydrogen bromide in water. "Constant boiling" hydrobromic acid is an aqueous solution that distills at 124.3 °C and contains 47.6% HBr by weight, which is 8.89 mol/L. Hydrobromic acid has a pKa of −9, making it a...
yields the alpha bromo-carboxylic acid . When the alkene is butadiene the initial reaction product with catalyst copper(II) chloride
Copper(II) chloride
Copper chloride is the chemical compound with the formula CuCl2. This is a light brown solid, which slowly absorbs moisture to form a blue-green dihydrate. The copper chlorides are some of the most common copper compounds, after copper sulfate....
is a 4-chloro-2-butene and after an elimination the aryl substituted butadiene . In a so-called reductive arylation with 3-buten-2-one, titanium trichloride reduces the newly formed double bond.

In a novel kilogram-scale metal-free Meerwein arylation the diazonium salt is formed from 2-nitroaniline, the alkene isopropenyl acetate is an adduct of propene and acetic acid
Acetic acid
Acetic acid is an organic compound with the chemical formula CH3CO2H . It is a colourless liquid that when undiluted is also called glacial acetic acid. Acetic acid is the main component of vinegar , and has a distinctive sour taste and pungent smell...
and the reaction product 2-nitrophenylacetone :