The substituent X is a halide
Halide
A halide is a binary compound, of which one part is a halogen atom and the other part is an element or radical that is less electronegative than the halogen, to make a fluoride, chloride, bromide, iodide, or astatide compound. Many salts are halides...
and nucleophiles can be sodium amide
Sodium amide
Sodium amide, commonly called sodamide, is the chemical compound with the formula NaNH2. This solid, which is dangerously reactive toward water, is white when pure, but commercial samples are typically gray due to the presence of small quantities of metallic iron from the manufacturing process...
, an alkoxide
Alkoxide
An alkoxide is the conjugate base of an alcohol and therefore consists of an organic group bonded to a negatively charged oxygen atom. They can be written as RO−, where R is the organic substituent. Alkoxides are strong bases and, when R is not bulky, good nucleophiles and good ligands...
or a carbon nucleophiles such as an enolate. In contrast to regular nucleophilic aromatic substitution
Nucleophilic aromatic substitution
right|300px|Aromatic nucleophilic substitutionA nucleophilic aromatic substitution is a substitution reaction in organic chemistry in which the nucleophile displaces a good leaving group, such as a halide, on an aromatic ring...
, deactivating groups on the arene are not required. 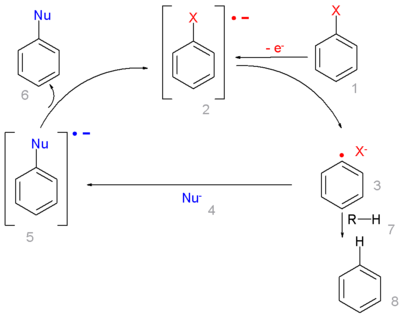 In this radical substitution
Radical substitution
In organic chemistry, a radical substitution reaction is a substitution reaction involving free radicals as a reactive intermediate.The reaction always involves at least two steps, and possibly a third....
the aryl halide 1 accepts an electron from an radical initiator
Radical initiator
In chemistry, radical initiators are substances that can produce radical species under mild conditions and promote radical reactions . These substances generally possess weak bonds—bonds that have small bond dissociation energies. Radical initiators are utilized in industrial processes such...
forming a radical anion 2. This intermediate collapses into an aryl radical
Aryl radical
An Aryl radical in organic chemistry is an reactive intermediate and an arene compound incorporating one free radical carbon atom as part of the ring structure. As such it is the radical counterpart of the Arenium ion. The parent compound is the phenyl radical C6H5....
3 and a halide anion. The aryl radical reacts with the nucleophile 4 to a new radical anion 5 which goes on to form the substituted product by transferring its electron to new aryl halide in the chain propagation
Chain propagation
Chain propagation is a process in which a reactive intermediate is continuously regenerated during the course of a chemical reaction. In polymerization reaction, the reactive end-groups of a polymer chain react in each propagation step with a new monomer molecule transferring the reactive group to...
. Alternatively the phenyl radical can abstract any loose proton from 7 forming the arene 8 in a chain termination
Chain termination
Chain termination is any chemical reaction that ceases the formation of reactive intermediates in a chain propagation step in the course of a polymerization, effectively bringing it to a halt.- Mechanisms of Termination :...
reaction. 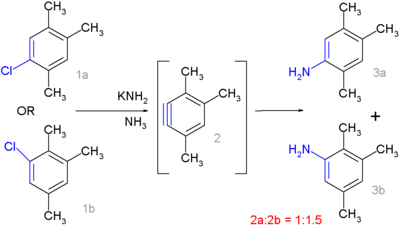 The isomer
Isomer
In chemistry, isomers are compounds with the same molecular formula but different structural formulas. Isomers do not necessarily share similar properties, unless they also have the same functional groups. There are many different classes of isomers, like stereoisomers, enantiomers, geometrical...
s 1a and 1b form the same aryne 2 which continues to react to the aniline
Aniline
Aniline, phenylamine or aminobenzene is an organic compound with the formula C6H5NH2. Consisting of a phenyl group attached to an amino group, aniline is the prototypical aromatic amine. Being a precursor to many industrial chemicals, its main use is in the manufacture of precursors to polyurethane...
s 3a and 3b in a 1 to 1.5 ratio. Clear-cut cine-substitution would give a 1:1 ratio but additional steric and electronic factors come into play as well.

Replacing chlorine
Chlorine
Chlorine is the chemical element with atomic number 17 and symbol Cl. It is the second lightest halogen, found in the periodic table in group 17. The element forms diatomic molecules under standard conditions, called dichlorine...
by iodine
Iodine
Iodine is a chemical element with the symbol I and atomic number 53. The name is pronounced , , or . The name is from the , meaning violet or purple, due to the color of elemental iodine vapor....
in the 1,2,4-trimethylbenzene
1,2,4-Trimethylbenzene
1,2,4-Trimethylbenzene is a colorless liquid with chemical formula C9H12. It is a flammable aromatic hydrocarbon with a strong odor. It occurs naturally in coal tar and petroleum . It is nearly insoluble in water, but well-soluble in ethanol, diethyl ether, and benzene.Industrially, it is...
moiety drastically changes the product distribution: 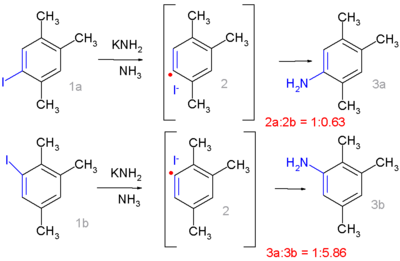 It now resembles ipso-substitution with 1a forming preferentially 3a and 1b forming 3b. Radical scavengers suppress ipso-substitution in favor of cine-substitution and the addition of potassium metal as an electron donor and radical initiator
Radical initiator
In chemistry, radical initiators are substances that can produce radical species under mild conditions and promote radical reactions . These substances generally possess weak bonds—bonds that have small bond dissociation energies. Radical initiators are utilized in industrial processes such...
does exactly the opposite.
The source of this article is wikipedia, the free encyclopedia.  The text of this article is licensed under the GFDL.