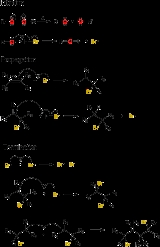 The basic steps with examples of the free radical addition (also known as radical chain mechanism) are:

Free radical reactions depend on a reagent having a (relatively) weak bond, allowing it to homolyse
Homolysis
In general it means breakdown to equal pieces There are separate meanings for the word in chemistry and biology.-Homolysis in chemistry:...
to form radicals (often with heat or light). Reagents without such a weak bond would likely proceed via a different mechanism. An example of an addition reaction involving aryl radicals is the Meerwein arylation
Meerwein arylation
The Meerwein arylation is an organic reaction involving the addition of an aryl diazonium salt to an electron-poor alkene usually supported by a metal salt. The reaction product is an alkylated arene compound...
.


Addition of mineral acid to an alkene

To illustrate, consider the alkoxy radical-catalyzed, anti-Markovnikov
Markovnikov's rule
In organic chemistry, Markovnikov's rule or Markownikoff's rule is an observation based on Zaitsev's rule. It was formulated by the Russian chemist Vladimir Vasilevich Markovnikov in 1870....
reaction of hydrogen bromide
Hydrogen bromide
Hydrogen bromide is the diatomic molecule HBr. HBr is a gas at standard conditions. Hydrobromic acid forms upon dissolving HBr in water. Conversely, HBr can be liberated from hydrobromic acid solutions with the addition of a dehydration agent, but not by distillation. Hydrogen bromide and...
to an alkene. In this reaction, a catalytic amount of organic peroxide
Organic peroxide
Organic peroxides are organic compounds containing the peroxide functional group . If the R' is hydrogen, the compound is called an organic hydroperoxide. Peresters have general structure RCOOR. The O-O bond easily breaks and forms free radicals of the form RO·...
is needed to abstract the acidic proton from HBr and generate the bromine radical, however a full molar equivalent of alkene
Alkene
In organic chemistry, an alkene, olefin, or olefine is an unsaturated chemical compound containing at least one carbon-to-carbon double bond...
and acid
Acid
An acid is a substance which reacts with a base. Commonly, acids can be identified as tasting sour, reacting with metals such as calcium, and bases like sodium carbonate. Aqueous acids have a pH of less than 7, where an acid of lower pH is typically stronger, and turn blue litmus paper red...
is required for completion. 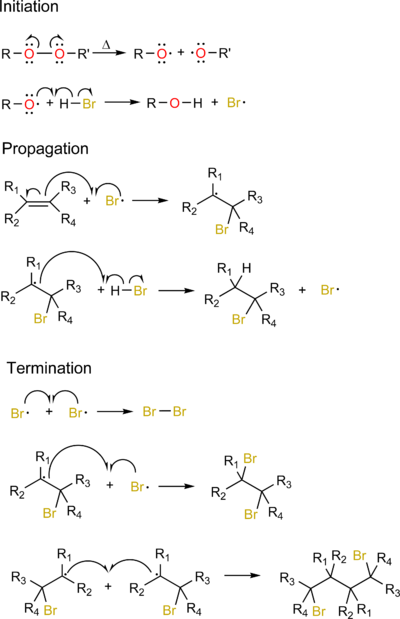 Note that the radical will be on the more substituted carbon. Free radical addition does not occur with the molecules HCl or HI. Both reactions are extremely endothermic
Endothermic
In thermodynamics, the word endothermic describes a process or reaction in which the system absorbs energy from the surroundings in the form of heat. Its etymology stems from the prefix endo- and the Greek word thermasi,...
and are not chemically favored.

In one specific type of radical addition called self-terminating oxidative radical cyclization, alkyne
Alkyne
Alkynes are hydrocarbons that have a triple bond between two carbon atoms, with the formula CnH2n-2. Alkynes are traditionally known as acetylenes, although the name acetylene also refers specifically to C2H2, known formally as ethyne using IUPAC nomenclature...
s are oxidized to ketone
Ketone
In organic chemistry, a ketone is an organic compound with the structure RCR', where R and R' can be a variety of atoms and groups of atoms. It features a carbonyl group bonded to two other carbon atoms. Many ketones are known and many are of great importance in industry and in biology...
s with intramolecular
Intramolecular
Intramolecular in chemistry describes a process or characteristic limited within the structure of a single molecule, a property or phenomenon limited to the extent of a single molecule.- Examples :...
radical cyclization
Radical cyclization
Radical cyclization reactions are organic chemical transformations that yield cyclic products via radical intermediates. They usually proceed in three basic steps: selective radical generation, radical cyclization, and conversion of the cyclized radical to product.-Introduction:Radical cyclization...
and the radical species are inorganic rather than carbon based. This type of reaction is self-terminating because propagating is not possible and the initiator is used in stoichiometric
Stoichiometry
Stoichiometry is a branch of chemistry that deals with the relative quantities of reactants and products in chemical reactions. In a balanced chemical reaction, the relations among quantities of reactants and products typically form a ratio of whole numbers...
amounts.

As an example a nitrate
Nitrate
The nitrate ion is a polyatomic ion with the molecular formula NO and a molecular mass of 62.0049 g/mol. It is the conjugate base of nitric acid, consisting of one central nitrogen atom surrounded by three identically-bonded oxygen atoms in a trigonal planar arrangement. The nitrate ion carries a...
radical is generated by photolysis of CAN
Ammonium cerium(IV) nitrate
Ceric ammonium nitrate is the inorganic compound with the formula 2Ce6. This orange-red, water-soluble cerium salt is widely used as an oxidising agent in organic synthesis and as a standard oxidant in quantitative analysis....
which reacts with an alkyne
Alkyne
Alkynes are hydrocarbons that have a triple bond between two carbon atoms, with the formula CnH2n-2. Alkynes are traditionally known as acetylenes, although the name acetylene also refers specifically to C2H2, known formally as ethyne using IUPAC nomenclature...
to generate first a very reactive vinyl
Vinyl
A vinyl compound is any organic compound that contains a vinyl group ,which are derivatives of ethene, CH2=CH2, with one hydrogen atom replaced with some other group...
radical and then via a 1,5-hydrogen atom transfer (HAT) and 5-exo-trig ring-closure
Baldwin's rules
Baldwin's Rules in organic chemistry are a series of guidelines outlining the relative favourabilities of ring closure reactions in alicyclic compounds. They were first proposed by Jack Baldwin in 1976...
a ketyl
Ketyl
A ketyl group in organic chemistry is an anion radical with the general structure C-O. in which an oxygen radical is bonded directly to carbon. This radical is very unstable and appears in chemical reactions as a reactive intermediate...
radical. The ketyl dislodges a nitrite
Nitrite
The nitrite ion has the chemical formula NO2−. The anion is symmetric with equal N-O bond lengths and a O-N-O bond angle of ca. 120°. On protonation the unstable weak acid nitrous acid is produced. Nitrite can be oxidised or reduced, with product somewhat dependent on the oxidizing/reducing agent...
radical which is not reactive enough for propagation and the ketone
Ketone
In organic chemistry, a ketone is an organic compound with the structure RCR', where R and R' can be a variety of atoms and groups of atoms. It features a carbonyl group bonded to two other carbon atoms. Many ketones are known and many are of great importance in industry and in biology...
is formed. 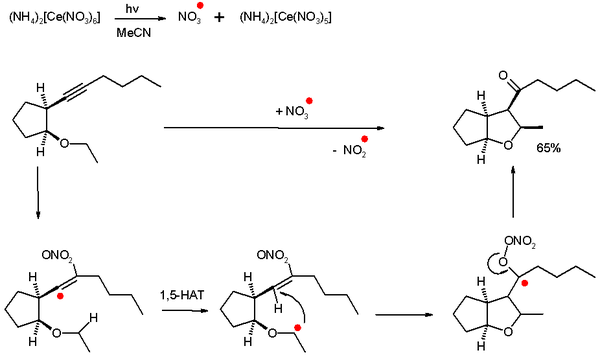 The radical species in effect is a single oxygen atom synthon
Synthon
A synthon is a concept in retrosynthetic analysis. It is defined as a structural unit within a molecule which is related to a possible synthetic operation. The term was coined by E.J. Corey...
. Other inorganic radical that show this type of reactivity are sulfate
Sulfate
In inorganic chemistry, a sulfate is a salt of sulfuric acid.-Chemical properties:...
radical ions (from ammonium persulfate
Ammonium persulfate
Ammonium persulfate 2S2O8 is a strong oxidizing agent. It is very soluble in water; the dissolution of the salt in water is endothermic. It is a radical initiator. It is used to etch copper on printed circuit boards as an alternative to ferric chloride solution...
) and hydroxyl
Hydroxyl
A hydroxyl is a chemical group containing an oxygen atom covalently bonded with a hydrogen atom. In inorganic chemistry, the hydroxyl group is known as the hydroxide ion, and scientists and reference works generally use these different terms though they refer to the same chemical structure in...
radicals.
The source of this article is wikipedia, the free encyclopedia.  The text of this article is licensed under the GFDL.