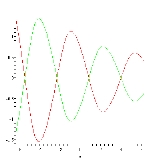 They were introduced by in the context of the first problem.

The canonical form for Mathieu's differential equation is

which follows on substitution

This has two regular singularities at

and one irregular singularity at infinity, which implies that in general (unlike many other special functions), the solutions of Mathieu's equation cannot be expressed in terms of hypergeometric functions.

Mathieu's differential equations arise as models in many contexts, including the stability of railroad rails as trains drive over them, seasonally forced population dynamics, the four-dimensional wave equation
Wave equation
The wave equation is an important second-order linear partial differential equation for the description of waves – as they occur in physics – such as sound waves, light waves and water waves. It arises in fields like acoustics, electromagnetics, and fluid dynamics...
, and the Floquet theory of the stability of limit cycles.

is a complex number, the Mathieu exponent, and P is a complex valued function which is periodic in

. However, P is in general not sinusoidal. In the example plotted below,

For fixed a,q, the Mathieu cosine

is a function of

is the unique solution which

These are real-valued functions which are closely related to the Floquet solution:

The general solution to the Mathieu equation (for fixed a,q) is a linear combination of the Mathieu cosine and Mathieu sine functions.

A noteworthy special case is

In general, the Mathieu sine and cosine are aperiodic. Nonetheless, for small values of q, we have approximately

, for countably many special values of

, called characteristic values, the Mathieu equation admits solutions which are periodic with period

. The characteristic values of the Mathieu cosine, sine functions respectively are written

, where n is a natural number
Natural number
In mathematics, the natural numbers are the ordinary whole numbers used for counting and ordering . These purposes are related to the linguistic notions of cardinal and ordinal numbers, respectively...
. The periodic special cases of the Mathieu cosine and sine functions are often written

respectively, although they are traditionally given a different normalization (namely, that their L2 norm equal

). Therefore, for positive q, we have

Note that, for example,

(green) resembles a cosine function, but with flatter hills and shallower valleys.