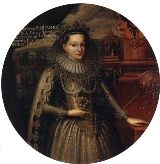 Encyclopedia
Marina Mniszech was a Russian Tsarina and a Polish
Poland
Poland , officially the Republic of Poland , is a country in Central Europe bordered by Germany to the west; the Czech Republic and Slovakia to the south; Ukraine, Belarus and Lithuania to the east; and the Baltic Sea and Kaliningrad Oblast, a Russian exclave, to the north...
noblewoman
Szlachta
The szlachta was a legally privileged noble class with origins in the Kingdom of Poland. It gained considerable institutional privileges during the 1333-1370 reign of Casimir the Great. In 1413, following a series of tentative personal unions between the Grand Duchy of Lithuania and the Kingdom of...
and a political adventurer in the Time of Troubles
Time of Troubles
The Time of Troubles was a period of Russian history comprising the years of interregnum between the death of the last Russian Tsar of the Rurik Dynasty, Feodor Ivanovich, in 1598, and the establishment of the Romanov Dynasty in 1613. In 1601-1603, Russia suffered a famine that killed one-third...
in Russia
Russia
Russia or , officially known as both Russia and the Russian Federation , is a country in northern Eurasia. It is a federal semi-presidential republic, comprising 83 federal subjects...
.

The first wedding ceremony, performed in November 1605 by bishop of Kraków cardinal
Cardinal (Catholicism)
A cardinal is a senior ecclesiastical official, usually an ordained bishop, and ecclesiastical prince of the Catholic Church. They are collectively known as the College of Cardinals, which as a body elects a new pope. The duties of the cardinals include attending the meetings of the College and...
Bernard Maciejowski was held per procura in Kraków
Kraków
Kraków also Krakow, or Cracow , is the second largest and one of the oldest cities in Poland. Situated on the Vistula River in the Lesser Poland region, the city dates back to the 7th century. Kraków has traditionally been one of the leading centres of Polish academic, cultural, and artistic life...
, at the still-famous Montelupi complex (Pod Jaszczurami and Firlejowska), and was attended by the Polish king Sigismund III Vasa
Sigismund III Vasa
Sigismund III Vasa was King of Poland and Grand Duke of Lithuania, a monarch of the united Polish–Lithuanian Commonwealth from 1587 to 1632, and King of Sweden from 1592 until he was deposed in 1599...
himself, as well as hundreds of high ranking szlachta
Szlachta
The szlachta was a legally privileged noble class with origins in the Kingdom of Poland. It gained considerable institutional privileges during the 1333-1370 reign of Casimir the Great. In 1413, following a series of tentative personal unions between the Grand Duchy of Lithuania and the Kingdom of...
members and foreign guests. Dmitri was represented by Muscovy envoy, Afanasy Vlasiev. Afterwards, Marina went with her father and a retinue
Retinue
A retinue is a body of persons "retained" in the service of a noble or royal personage, a suite of "retainers".-Etymology:...
of approximately 4,000 to Moscow
Moscow
Moscow is the capital, the most populous city, and the most populous federal subject of Russia. The city is a major political, economic, cultural, scientific, religious, financial, educational, and transportation centre of Russia and the continent...
. In the beginning of May 1606, Marina entered Moscow in a triumphant parade, and on 8 May was crowned
Coronation
A coronation is a ceremony marking the formal investiture of a monarch and/or their consort with regal power, usually involving the placement of a crown upon their head and the presentation of other items of regalia...
in Uspensky Sobor when Patriarch Ignatius
Patriarch Ignatius
Ignatius was a Russian Orthodox bishop of Greek descent who was the second Patriarch of Moscow and All Russia in 1605-1606, even though his status is now disputed and he is frequently omitted from the list of Patriarchs of Moscow by the Russian Orthodox Church.Ignatius was reported to be of...
confirmed their marriage and put the Rurikids crown on her head. It is unknown whether Marina converted from Catholicism to Orthodoxy. She wore a Polish wedding dress, and Dmitri wore the armor of Polish hussar
Hussar
Hussar refers to a number of types of light cavalry which originated in Hungary in the 14th century, tracing its roots from Serbian medieval cavalry tradition, brought to Hungary in the course of the Serb migrations, which began in the late 14th century....
.

However, Marina did not reign long. On the morning of 17 May 1606, about two weeks after the marriage, conspirators opposed to Dmitri and his policy of close cooperation with Poland stormed the Kremlin. Dmitri tried to flee through a window but broke his leg in the fall. One of the plotters shot him dead on the spot. At first the body was put on display, then cremated and the ashes were shot from a cannon towards Poland. Dmitri's reign had lasted a mere ten months. Vasili Shuisky
Vasili IV of Russia
Vasili IV of Russia was Tsar of Russia between 1606 and 1610 after the murder of False Dmitriy I. His reign fell during the Time of Troubles....
, whom Dmitri earlier pardoned for conspiring against him, took his place as Tsar. This coup d'etat
Coup d'état
A coup d'état state, literally: strike/blow of state)—also known as a coup, putsch, and overthrow—is the sudden, extrajudicial deposition of a government, usually by a small group of the existing state establishment—typically the military—to replace the deposed government with another body; either...
caused thousands of deaths, including many from the Polish entourage. Mariana and Jerzy Mniszech were imprisoned. However, the story of the False Dmitri was just beginning.
After the death of False Dmitri I, Marina Mniszech was spared her life - after she had rejected her royal title - and sent back to Poland
Poland
Poland , officially the Republic of Poland , is a country in Central Europe bordered by Germany to the west; the Czech Republic and Slovakia to the south; Ukraine, Belarus and Lithuania to the east; and the Baltic Sea and Kaliningrad Oblast, a Russian exclave, to the north...
in July 1608. However, her father Jerzy Mniszech didn't give up on his plan to became father-in-law of the Tsar. Exiled to Yaroslavl
Yaroslavl
Yaroslavl is a city and the administrative center of Yaroslavl Oblast, Russia, located northeast of Moscow. The historical part of the city, a World Heritage Site, is located at the confluence of the Volga and the Kotorosl Rivers. It is one of the Golden Ring cities, a group of historic cities...
, he searched for a way to regain his favours. With his help, Marina turned up in Tushino
Tushino
Tushino is a former village and town to the north of Moscow, which has been part of the city's area since 1960. Between 1939 and 1960, Tushino was classed as a separate town. The Skhodnya River flows across the southern part of Tushino....
, where she would secretly marry another impostor False Dmitri II after "recognizing" her miraculously "salvaged" husband in him. Polish hetman
Hetman
Hetman was the title of the second-highest military commander in 15th- to 18th-century Poland and the Grand Duchy of Lithuania, which together, from 1569 to 1795, comprised the Polish-Lithuanian Commonwealth, or Rzeczpospolita....
Stanisław Żółkiewski wrote in his memoirs that the only two things False Dmitris I and II had in common was that they were both human and usurpers. This marriage would soon share the same fate as her previous one.

After the death of False Dmitri II in December 11, 1610, Marina Mniszech found herself a protector in the person of ataman
Ataman
Ataman was a commander title of the Ukrainian People's Army, Cossack, and haidamak leaders, who were in essence the Cossacks...
Ivan Zarutsky
Ivan Zarutsky
Ivan Martynovich Zarutsky was a Cossack leader in Russia in the early 17th century.In 1606–1607, ataman Zarutsky and his men took part in the Bolotnikov Uprising. After Ivan Bolotnikov's defeat on the outskirts of Moscow, Zarutsky went to Poland to take the side of "tsar Dmitry" and Polish king...
, who would try to support the nomination
Nomination
Nomination is part of the process of selecting a candidate for either election to an office, or the bestowing of an honor or award.In the context of elections for public office, a candidate who has been selected by a political party is normally said to be the nominee of that party...
of her son Ivan
Tsarevich Ivan Dmitriyevich
"Tsarevich" Ivan Dmitriyevich was the only son of False Dmitry II of Russia and his wife Marina Mniszech, daughter of Polish Voivode Jerzy Mniszech and his wife Jadwiga Tarło. He was a claimant to the throne of the Tsardom of Russia until his death at the age of not quite four, in December 1614...
(born in January 1611) for the Russian throne
Throne
A throne is the official chair or seat upon which a monarch is seated on state or ceremonial occasions. "Throne" in an abstract sense can also refer to the monarchy or the Crown itself, an instance of metonymy, and is also used in many expressions such as "the power behind the...
. His henchmen called Marina Mniszech's son "Ivan Dmitriyevich" (literally Ivan, son of Dmitri), however, Patriarch Hermogenes
Patriarch Hermogenes
Hermogenes, or Germogen , was the Patriarch of Moscow and all Russia from 1606. It was he who inspired the popular uprising that put an end to the Time of Troubles. Hermogenes was glorified by the Russian Orthodox Church in 1913...
would later dub him a "little thief". In the summer of 1613, after having lost their supporters, Mniszech and Zarutsky fled to Astrakhan
Astrakhan
Astrakhan is a major city in southern European Russia and the administrative center of Astrakhan Oblast. The city lies on the left bank of the Volga River, close to where it discharges into the Caspian Sea at an altitude of below the sea level. Population:...
but with the election of Michael Romanov as tsar, the citizens of Astrakhan wanted the pretender and his family gone from their city. In 1614 an uprising of townspeople was aimed solely at capturing the family. They fled into the steppes, to escape. Near the Yaik River in May 1614, after failing to gather a support for a Cossack uprising, they would be captured by the Cossacks a month later and handed over to the government.

Ivan Zarutsky and Mniszech's little son were executed in 1614. Marina Mniszech died in prison
Prison
A prison is a place in which people are physically confined and, usually, deprived of a range of personal freedoms. Imprisonment or incarceration is a legal penalty that may be imposed by the state for the commission of a crime...
soon afterward.