Encyclopedia
The March 1st Movement, or Samil Movement, was one of the earliest public displays of Korean resistance during the occupation of the Korean Empire
Korean Empire
The Greater Korean Empire was an empire of Korea that succeeded the Joseon Dynasty.In October 1897, Emperor Gojong proclaimed the new entity at Gyeongungung Palace and oversaw the partially successful modernization of the military, economy, land system, education system, and various industries...
by Japan. The name refers to an event that occurred on March 1, 1919, hence the movement's name, literally meaning "Three-One Movement" or "March First Movement" in Korean
Korean language
Korean is the official language of the country Korea, in both South and North. It is also one of the two official languages in the Yanbian Korean Autonomous Prefecture in People's Republic of China. There are about 78 million Korean speakers worldwide. In the 15th century, a national writing...
. It is also sometimes referred to as the Manse Demonstrations (만세운동).

The Samil Movement came as a result of the repressive nature of colonial occupation under its military rule of the Korean Empire following 1905, and the "Fourteen Points
Fourteen Points
The Fourteen Points was a speech given by United States President Woodrow Wilson to a joint session of Congress on January 8, 1918. The address was intended to assure the country that the Great War was being fought for a moral cause and for postwar peace in Europe...
" outlining the right of national "self-determination
Self-determination
Self-determination is the principle in international law that nations have the right to freely choose their sovereignty and international political status with no external compulsion or external interference...
" proclaimed by President Woodrow Wilson
Woodrow Wilson
Thomas Woodrow Wilson was the 28th President of the United States, from 1913 to 1921. A leader of the Progressive Movement, he served as President of Princeton University from 1902 to 1910, and then as the Governor of New Jersey from 1911 to 1913...
at the Paris Peace Conference
Paris Peace Conference, 1919
The Paris Peace Conference was the meeting of the Allied victors following the end of World War I to set the peace terms for the defeated Central Powers following the armistices of 1918. It took place in Paris in 1919 and involved diplomats from more than 32 countries and nationalities...
in January 1919. After hearing news of Wilson’s speech, Korean students studying in Tokyo
Tokyo
, ; officially , is one of the 47 prefectures of Japan. Tokyo is the capital of Japan, the center of the Greater Tokyo Area, and the largest metropolitan area of Japan. It is the seat of the Japanese government and the Imperial Palace, and the home of the Japanese Imperial Family...
published a statement demanding freedom from colonial rule.

Adding to this was the death of former Emperor Gojong on January 21, 1919. There was widespread suspicion that he had been poisoned, credible since previous attempts (the "coffee plot") were well-known. 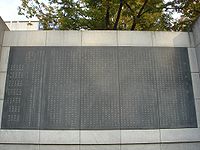 At 2 P.M. on 1 March 1919, the 33 nationalists who formed the core of the Samil Movement convened at Taehwagwan Restaurant in Seoul
Seoul
Seoul , officially the Seoul Special City, is the capital and largest metropolis of South Korea. A megacity with a population of over 10 million, it is the largest city proper in the OECD developed world...
, and read the Korean Declaration of Independence
Declaration of independence
A declaration of independence is an assertion of the independence of an aspiring state or states. Such places are usually declared from part or all of the territory of another nation or failed nation, or are breakaway territories from within the larger state...
that had been drawn up by the historian Choe Nam-seon and the poet Manhae
Manhae
Manhae was a twentieth century Korean Buddhist reformer and poet. Manhae was his pen name; his birth name was Han Yu-cheon, but he is universally known by the name he was given by his meditation instructor in 1907, Han Yong-un Manhae was born in northern Gyeongsang province in what is today South...
(also known as Han Yongun). The nationalists initially planned to assemble at Tapgol Park
Tapgol Park
Tapgol Park, formerly Pagoda Park, is a small public park located at 97 Jongno-gil , Seoul, South Korea. This park was once a site of Wongaksa...
in downtown Seoul, but they chose a more private location out of fear that the gathering might turn into a riot. The leaders of the movement signed the document and sent a copy to the Governor General
Governor-General of Korea
The post of Japanese Governor-General of Korea served as the chief administrator of the Japanese government in Korea while it was held as the Japanese colony of Chōsen from 1910 to 1945...
, with their compliments.
The movement leaders then telephoned the central police station to inform them of their actions and were arrested afterwards.

Before the formal declaration, Korea also aired the following complaints to be heard by the Japanese people through papers and media:

These grievances were highly influenced by ‘‘‘Wilson’s Declaration of the Principle of Self Determination’’’.

Despite the nationalists' concerns, massive crowds assembled in Pagoda Park to hear a student, Chung Jae-yong, read the declaration publicly. Afterwards, the gathering formed into a procession, which the Japanese military police attempted to suppress. Special delegates associated with the movement also read copies of the independence proclamation from appointed places throughout the country at 2 PM on that same day.

Protests continued to spread and, as the Japanese local and military police could not contain the crowds, the army and even the navy were also called in. There were several reports of atrocities. In one notable instance, Japanese police herded the inhabitants of the village of Jeam-ri into a locked church before burning it to the ground, even shooting through the burning windows to ensure that no one made it out alive.

Approximately 2,000,000 Koreans had participated in the more than 1,500 demonstrations, many who were massacred by the Japanese police force and army. The frequently cited The Bloody History of the Korean Independence Movement (한국독립운동지혈사, 韓國獨立運動之血史) by Park Eunsik
Park Eunsik
Park Eunsik was a historian and the second President of the Provisional Government of the Republic of Korea in Shanghai during part of 1925. Soon after the impeachment of Syngman Rhee from the presidency, Park was elected the president, but he soon died from illness while in office...
claims 7,509 people were killed, 15,849 wounded, and 46,303 arrested. From March 1 to April 11, Japanese officials reported that 553 people were killed with over 12,000 arrested, while 8 policemen and military policemen were killed and 158 were wounded. Many of those arrested were taken to the infamous Seodaemun Prison
Seodaemun prison
Seodaemun Prison History Hall is a museum and former prison in Seodaemun-gu, Seoul, South Korea. It was constructed beginning in 1907. The prison was opened on October 21, 1908, under the name Gyeongseong Gamok. Its name was changed to Seodaemun Prison in 1923.The prison was used during the...
in Seoul where they were imprisoned without trial and tortured. Several hundred people were murdered in extrajudicial killings in the "death house" at the rear of the site.

The March 1st movement resulted in a major change in imperial policy towards Korea. Governor-General
Governor-General of Korea
The post of Japanese Governor-General of Korea served as the chief administrator of the Japanese government in Korea while it was held as the Japanese colony of Chōsen from 1910 to 1945...
Hasegawa Yoshimichi accepted responsibility for the loss of control (although most of the repressive measures leading to the uprising had been put into place by his predecessors) and was replaced by Saito Makoto
Saito Makoto
Viscount was an admiral in the Imperial Japanese Navy, two-time Governor-General of Korea from 1919 to 1927 and from 1929 to 1931, and the 30th Prime Minister of Japan from May 26, 1932 to July 8, 1934.-Early life:...
. Some of the aspects of Japanese rule considered most objectionable to Koreans were removed. The military police were replaced by a civilian force, and limited press freedom was permitted under what was termed the 'cultural policy'. Many of these lenient policies were reversed during the Second Sino-Japanese War
Second Sino-Japanese War
The Second Sino-Japanese War was a military conflict fought primarily between the Republic of China and the Empire of Japan. From 1937 to 1941, China fought Japan with some economic help from Germany , the Soviet Union and the United States...
and World War II
World War II
World War II, or the Second World War , was a global conflict lasting from 1939 to 1945, involving most of the world's nations—including all of the great powers—eventually forming two opposing military alliances: the Allies and the Axis...
.

Women also found new opportunities after the movement to express their views for the first time in Korea. Ideas of female liberation were allowed to be printed after the rebellion. Such journals as the Sin Yoja (New Woman) and Yoja Kye (Women's World) were printed.

The March 1 Movement was a catalyst for the establishment of the Provisional Government of the Republic of Korea
Provisional Government of the Republic of Korea
The Provisional Government of the Republic of Korea was the partially recognised government in exile of Korea, based in Shanghai, China, and later in Chongqing, during the Colonial Korea.-History:...
in Shanghai
Shanghai
Shanghai is the largest city by population in China and the largest city proper in the world. It is one of the four province-level municipalities in the People's Republic of China, with a total population of over 23 million as of 2010...
in April 1919 and also influenced nonviolent resistance
Nonviolent resistance
Nonviolent resistance is the practice of achieving goals through symbolic protests, civil disobedience, economic or political noncooperation, and other methods, without using violence. It is largely synonymous with civil resistance...
in India
India
India , officially the Republic of India , is a country in South Asia. It is the seventh-largest country by geographical area, the second-most populous country with over 1.2 billion people, and the most populous democracy in the world...
and many other countries.