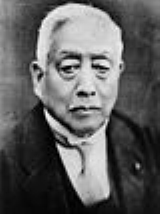 Encyclopedia
Viscount
Viscount
A viscount or viscountess is a member of the European nobility whose comital title ranks usually, as in the British peerage, above a baron, below an earl or a count .-Etymology:...
was an admiral
Admiral
Admiral is the rank, or part of the name of the ranks, of the highest naval officers. It is usually considered a full admiral and above vice admiral and below admiral of the fleet . It is usually abbreviated to "Adm" or "ADM"...
in the Imperial Japanese Navy
Imperial Japanese Navy
The Imperial Japanese Navy was the navy of the Empire of Japan from 1869 until 1947, when it was dissolved following Japan's constitutional renunciation of the use of force as a means of settling international disputes...
, two-time Governor-General of Korea from 1919 to 1927 and from 1929 to 1931, and the 30th Prime Minister of Japan
Prime Minister of Japan
The is the head of government of Japan. He is appointed by the Emperor of Japan after being designated by the Diet from among its members, and must enjoy the confidence of the House of Representatives to remain in office...
from May 26, 1932 to July 8, 1934.

Saitō was born in Mizusawa Domain
Mizusawa, Iwate
Mizusawa was a city located in Iwate Prefecture, Japan.As of 2003, the city had an estimated population of 60,979 and a population density of 629.17 persons per km². The total area was 96.92 km².The city was founded on April 1, 1954....
, Mutsu Province
Mutsu Province
was an old province of Japan in the area of Fukushima, Miyagi, Iwate and Aomori prefecture and the municipalities of Kazuno and Kosaka in Akita Prefecture...
(part of present day Ōshū City
Oshu, Iwate
is the second largest city in Iwate Prefecture, Japan with a population of 127,804.The city was founded on February 20, 2006, as the result of a merger between the cities of Esashi and Mizusawa, the towns of Maesawa and Isawa and the village of Koromogawa from Isawa District...
Iwate Prefecture
Iwate Prefecture
is the second largest prefecture of Japan after Hokkaido. It is located in the Tōhoku region of Honshū island and contains the island's easternmost point. The capital is Morioka. Iwate has the lowest population density of any prefecture outside Hokkaido...
), as the son of a samurai
Samurai
is the term for the military nobility of pre-industrial Japan. According to translator William Scott Wilson: "In Chinese, the character 侍 was originally a verb meaning to wait upon or accompany a person in the upper ranks of society, and this is also true of the original term in Japanese, saburau...
of the Mizusawa Clan. In 1879, he graduated from the 6th class Imperial Japanese Naval Academy
Imperial Japanese Naval Academy
The was a school established to train officers for the Imperial Japanese Navy. It originally located in Nagasaki, moved to Yokohama in 1866, and was relocated to Tsukiji, Tokyo in 1869. It moved to Etajima, Hiroshima in 1888...
, ranking third out of a class of 17 cadets.

After his promotion to lieutenant commander
Lieutenant Commander
Lieutenant Commander is a commissioned officer rank in many navies. The rank is superior to a lieutenant and subordinate to a commander...
on December 20, 1893, he served as executive officer
Executive officer
An executive officer is generally a person responsible for running an organization, although the exact nature of the role varies depending on the organization.-Administrative law:...
on the cruiser
Cruiser
A cruiser is a type of warship. The term has been in use for several hundreds of years, and has had different meanings throughout this period...
and battleship
Battleship
A battleship is a large armored warship with a main battery consisting of heavy caliber guns. Battleships were larger, better armed and armored than cruisers and destroyers. As the largest armed ships in a fleet, battleships were used to attain command of the sea and represented the apex of a...
.

During the First Sino-Japanese War
First Sino-Japanese War
The First Sino-Japanese War was fought between Qing Dynasty China and Meiji Japan, primarily over control of Korea...
, Saitō served as captain of the cruiser
Cruiser
A cruiser is a type of warship. The term has been in use for several hundreds of years, and has had different meanings throughout this period...
s and . On November 10, 1898, he became Vice Minister of the Navy, and was promoted to rear admiral
Rear Admiral
Rear admiral is a naval commissioned officer rank above that of a commodore and captain, and below that of a vice admiral. It is generally regarded as the lowest of the "admiral" ranks, which are also sometimes referred to as "flag officers" or "flag ranks"...
on May 20, 1900

Saitō was again Vice Navy Minister at the start of the Russo-Japanese War
Russo-Japanese War
The Russo-Japanese War was "the first great war of the 20th century." It grew out of rival imperial ambitions of the Russian Empire and Japanese Empire over Manchuria and Korea...
of 1904-1905. He was promoted to Vice Admiral on June 6, 1904. He was awarded the Order of the Rising Sun
Order of the Rising Sun
The is a Japanese order, established in 1875 by Emperor Meiji of Japan. The Order was the first national decoration awarded by the Japanese Government, created on April 10, 1875 by decree of the Council of State. The badge features rays of sunlight from the rising sun...
(1st class) in 1906. After the end of the war, he served as Navy Minister
Ministry of the Navy of Japan
The was a cabinet-level ministry in the Empire of Japan charged with the administrative affairs of the Imperial Japanese Navy . It existed from 1872 to 1945.-History:...
for 6 years, from 1906–1914, during which time he continually strove for expansion of the navy.

On September 21, 1907, Saitō was ennobled with the title of danshaku (baron
Baron
Baron is a title of nobility. The word baron comes from Old French baron, itself from Old High German and Latin baro meaning " man, warrior"; it merged with cognate Old English beorn meaning "nobleman"...
) under the kazoku
Kazoku
The was the hereditary peerage of the Empire of Japan that existed between 1869 and 1947.-Origins:Following the Meiji Restoration of 1868, the ancient court nobility of Kyoto regained some of its lost status...
peerage system. On October 16, 1912, he was promoted to full admiral
Admiral
Admiral is the rank, or part of the name of the ranks, of the highest naval officers. It is usually considered a full admiral and above vice admiral and below admiral of the fleet . It is usually abbreviated to "Adm" or "ADM"...
. However, on April 16, 1914, Saitō was forced to resign from his post as Navy Minister due implications of his involvement in the Siemens scandal
Siemens scandal
of January 1914 was one of several spectacular political scandals of late Meiji and Taishō period Japanese politics, leading to the fall of the cabinet of Yamamoto Gonnohyoe...
, and officially entered the reserves.

In 1919, Saitō was appointed as the third Japanese Governor-General of Korea, a post which he held for many years. He was appointed just after the Samil Independence Movement
March 1st Movement
The March 1st Movement, or Samil Movement, was one of the earliest public displays of Korean resistance during the occupation of the Korean Empire by Japan. The name refers to an event that occurred on March 1, 1919, hence the movement's name, literally meaning "Three-One Movement" or "March First...
, and implemented a series of measures to moderate the policies of Japanese rule. He served as governor-general of Korea twice (from 1919–27, and again from 1929–31). He was awarded the Order of the Paulownia Flowers
Order of the Paulownia Flowers
The ' is an order presented by the Japanese Government. Established in 1888 during the Meiji Restoration as the highest award in the Order of the Rising Sun; however, since 2003 it has been an Order in its own right...
in 1924. On April 29, 1925, his title was elevated to that of shishaku (viscount
Viscount
A viscount or viscountess is a member of the European nobility whose comital title ranks usually, as in the British peerage, above a baron, below an earl or a count .-Etymology:...
).

Following the assassination of Prime Minister
Prime Minister of Japan
The is the head of government of Japan. He is appointed by the Emperor of Japan after being designated by the Diet from among its members, and must enjoy the confidence of the House of Representatives to remain in office...
Inukai Tsuyoshi
Inukai Tsuyoshi
was a Japanese politician and the 29th Prime Minister of Japan from 13 December 1931 to 15 May 1932.-Early life:Inukai was born to a former samurai family of the Niwase Domain, in Niwase village, Bizen Province , and was a graduate of Keio Gijuku in Tokyo. In his early career, he worked as a...
on May 15, 1932 by fanatical navy officers who thought Inukai far too conciliatory (the May 15 Incident
May 15 Incident
The ' was an attempted coup d'état in Japan, on May 15, 1932, launched by radical elements of the Imperial Japanese Navy, aided by cadets in the Imperial Japanese Army and civilian remnants of the League of Blood Incident. Prime Minister Inukai Tsuyoshi was assassinated by 11 young naval officers...
), Prince Saionji Kinmochi
Saionji Kinmochi
Prince was a Japanese politician, statesman and twice Prime Minister of Japan. His title does not signify the son of an emperor, but the highest rank of Japanese hereditary nobility; he was elevated from marquis to prince in 1920...
, one of the Emperor's closest and strongest advisors, attempted to stop the slide towards a military take-over of the government. In a compromise move, Saitō was chosen to be Inukai's successor. Sadao Araki
Sadao Araki
Baron was a general in the Imperial Japanese Army before World War II. A charismatic leader and one of the principal nationalist right-wing political theorists in the late Japanese Empire, he was regarded as the leader of the radical faction within the politicized Japanese Army and served as...
remained as War Minister and immediately began making demands on the new government. During Saitō tenure, Japan recognized the independence of Manchukuo
Manchukuo
Manchukuo or Manshū-koku was a puppet state in Manchuria and eastern Inner Mongolia, governed under a form of constitutional monarchy. The region was the historical homeland of the Manchus, who founded the Qing Empire in China...
, and withdrew from the League of Nations
League of Nations
The League of Nations was an intergovernmental organization founded as a result of the Paris Peace Conference that ended the First World War. It was the first permanent international organization whose principal mission was to maintain world peace...
.

Saitō's administration was one of the longer-serving ones of the inter-war period, and it continued until July 8, 1934; when the cabinet resigned en masse because of the Teijin Incident
Teijin Incident
was a political scandal in the early Shōwa period of the Empire of Japan which brought about the collapse of the administration of Prime Minister Saitō Makoto in 1934.-History and background:...
bribery scandal. Keisuke Okada
Keisuke Okada
was an admiral in the Imperial Japanese Navy, politician and the 31st Prime Minister of Japan from 8 July 1934 to 9 March 1936.-Early life:Okada was born in what is now Fukui Prefecture to an ex-samurai family. He attended the 15th class of the Imperial Japanese Naval Academy, graduating 7th out of...
succeeded as prime minister.

Saitō continued to be an important figure in politics as Lord Keeper of the Privy Seal from December 26, 1935 but was assassinated during the February 26 Incident
February 26 Incident
The was an attempted coup d'état in Japan, from February 26 to 29, 1936 carried out by 1,483 troops of the Imperial Japanese Army. Several leading politicians were killed and the center of Tokyo was briefly occupied by the rebelling troops...
of 1936 at his home in Yotsuya, Tokyo.

Saitō was posthumously awarded Supreme Order of the Chrysanthemum
Order of the Chrysanthemum
is Japan's highest order. The Grand Cordon of the Order was established in 1876 by Emperor Meiji of Japan; the collar of the Order was added on January 4, 1888. Although technically the order has only one class, it can either be awarded with collar , or with grand cordon...
.