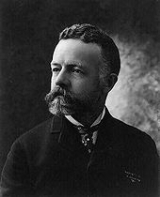 Overview
The Fourteen Points was a speech given by United States
United States
The United States of America is a federal constitutional republic comprising fifty states and a federal district...
President Woodrow Wilson
Woodrow Wilson
Thomas Woodrow Wilson was the 28th President of the United States, from 1913 to 1921. A leader of the Progressive Movement, he served as President of Princeton University from 1902 to 1910, and then as the Governor of New Jersey from 1911 to 1913...
to a joint session
Joint session of the United States Congress
Joint sessions of the United States Congress are the gatherings together of both houses of the United States Congress...
of Congress
United States Congress
The United States Congress is the bicameral legislature of the federal government of the United States, consisting of the Senate and the House of Representatives. The Congress meets in the United States Capitol in Washington, D.C....
on January 8, 1918. The address was intended to assure the country that the Great War
World War I
World War I , which was predominantly called the World War or the Great War from its occurrence until 1939, and the First World War or World War I thereafter, was a major war centred in Europe that began on 28 July 1914 and lasted until 11 November 1918...
was being fought for a moral cause and for postwar peace in Europe. People in Europe generally welcomed Wilson's intervention
Interventionism (politics)
Interventionism is a term for a policy of non-defensive activity undertaken by a nation-state, or other geo-political jurisdiction of a lesser or greater nature, to manipulate an economy or society...
, but his Allied
Allies of World War I
The Entente Powers were the countries at war with the Central Powers during World War I. The members of the Triple Entente were the United Kingdom, France, and the Russian Empire; Italy entered the war on their side in 1915...
colleagues (Georges Clemenceau
Georges Clemenceau
Georges Benjamin Clemenceau was a French statesman, physician and journalist. He served as the Prime Minister of France from 1906 to 1909, and again from 1917 to 1920. For nearly the final year of World War I he led France, and was one of the major voices behind the Treaty of Versailles at the...
, David Lloyd George
David Lloyd George
David Lloyd George, 1st Earl Lloyd-George of Dwyfor OM, PC was a British Liberal politician and statesman...
and Vittorio Emanuele Orlando
Vittorio Emanuele Orlando
Vittorio Emanuele Orlando was an Italian diplomat and political figure. He was born in Palermo, Sicily. His father, a landed gentleman, delayed venturing out to register his son's birth for fear of Giuseppe Garibaldi's 1,000 patriots who had just stormed into Sicily on the first leg of their march...
) were sceptical of the applicability of Wilsonian
Wilsonian
Wilsonianism or Wilsonian are words used to describe a certain type of ideological perspectives on foreign policy. The term comes from the ideology of United States President Woodrow Wilson and his famous Fourteen Points that he believed would help create world peace if implemented.Common...
idealism
Idealism
In philosophy, idealism is the family of views which assert that reality, or reality as we can know it, is fundamentally mental, mentally constructed, or otherwise immaterial. Epistemologically, idealism manifests as a skepticism about the possibility of knowing any mind-independent thing...
.

Which parts of Wilson's plan did this? 1. create a council of representatives from all over the world to discuss issues? 2. removed restrictions...

What happened during the fourteen points?

When Wilson coul not convince the legislature to go withhis Fourteen points, what drastic move did he make in hopes of causing pressure on them?

Was it difficult for america to remain neutral during the First World War? Why or why not? explain.

What obstacles did woodrow wilson face in making his fourteen points a reality. discuss the nature os these obstacle and why wilson failed to achieve...
More
x