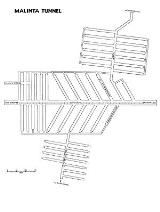 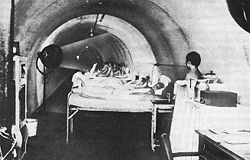 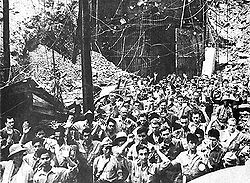 The Malinta Tunnel is a tunnel
Tunnel
A tunnel is an underground passageway, completely enclosed except for openings for egress, commonly at each end.A tunnel may be for foot or vehicular road traffic, for rail traffic, or for a canal. Some tunnels are aqueducts to supply water for consumption or for hydroelectric stations or are sewers...
complex built by the United States Army Corps of Engineers
United States Army Corps of Engineers
The United States Army Corps of Engineers is a federal agency and a major Army command made up of some 38,000 civilian and military personnel, making it the world's largest public engineering, design and construction management agency...
on the island of Corregidor
Corregidor
Corregidor Island, locally called Isla ng Corregidor, is a lofty island located at the entrance of Manila Bay in southwestern part of Luzon Island in the Philippines. Due to this location, Corregidor was fortified with several coastal artillery and ammunition magazines to defend the entrance of...
in the Philippines
Philippines
The Philippines , officially known as the Republic of the Philippines , is a country in Southeast Asia in the western Pacific Ocean. To its north across the Luzon Strait lies Taiwan. West across the South China Sea sits Vietnam...
. It was initially used as a bomb-proof storage and personnel bunker, but was later equipped as a 1,000-bed hospital. The main tunnel, running east to west, is 831 feet (253.3 m) long, 24 feet (7.3 m) wide and 18 feet (5.5 m) high. Branching off from this main shaft are 13 lateral tunnels on the north side and 11 lateral tunnels on the south side. Each lateral averaged 160 feet (48.8 m) in length and 15 feet (4.6 m) in width.

The Malinta Tunnel derives its name from Malinta Hill, a 390 feet (118.9 m) rise through which its shaft is bored. Malinta is Filipino
Filipino language
This move has drawn much criticism from other regional groups.In 1987, a new constitution introduced many provisions for the language.Article XIV, Section 6, omits any mention of Tagalog as the basis for Filipino, and states that:...
for "full of leeches", linta being the local word for "leech
Leech
Leeches are segmented worms that belong to the phylum Annelida and comprise the subclass Hirudinea. Like other oligochaetes such as earthworms, leeches share a clitellum and are hermaphrodites. Nevertheless, they differ from other oligochaetes in significant ways...
".

The Army Corps of Engineers rented obsolete equipment from Baguio gold miners for a nominal fee and made do with condemned TNT from the Ordnance Department
Ordnance Corps
The United States Army Ordnance Corps is a Sustainment branch of the United States Army, headquartered at Fort Lee, Virginia.-Mission Statement:The U.S...
. The explosive delivered was in powder form, and had to be wrapped into makeshift cartridges using magazine
Magazine
Magazines, periodicals, glossies or serials are publications, generally published on a regular schedule, containing a variety of articles. They are generally financed by advertising, by a purchase price, by pre-paid magazine subscriptions, or all three...
pages, which were placed into holes drilled into the rock. Labor was provided by the Philippine Commonwealth in the form of 1,000 convict
Convict
A convict is "a person found guilty of a crime and sentenced by a court" or "a person serving a sentence in prison", sometimes referred to in slang as simply a "con". Convicts are often called prisoners or inmates. Persons convicted and sentenced to non-custodial sentences often are not termed...
s from the Bilibid Prison in Manila
Manila
Manila is the capital of the Philippines. It is one of the sixteen cities forming Metro Manila.Manila is located on the eastern shores of Manila Bay and is bordered by Navotas and Caloocan to the north, Quezon City to the northeast, San Juan and Mandaluyong to the east, Makati on the southeast,...
. A company of engineers from the Philippine Scouts
Philippine Scouts
The Philippine Scouts was a military organization of the United States Army from 1901 until the end of World War II. Made up of native Filipinos assigned to the United States Army Philippine Department, these troops were generally enlisted and under the command of American officers, however, a...
worked on the construction as foremen
Construction foreman
A construction foreman is the worker or tradesman who is in charge of a construction crew. While traditionally this role has been assumed by a senior male worker, the title in the modern sense is gender non-specific in intent...
and clerks.

Ironically, the cement
Cement
In the most general sense of the word, a cement is a binder, a substance that sets and hardens independently, and can bind other materials together. The word "cement" traces to the Romans, who used the term opus caementicium to describe masonry resembling modern concrete that was made from crushed...
for concrete
Concrete
Concrete is a composite construction material, composed of cement and other cementitious materials such as fly ash and slag cement, aggregate , water and chemical admixtures.The word concrete comes from the Latin word...
used to line the tunnels with was bought from the Japanese.

During the re-taking of the island by U.S. forces in 1945, Japanese soldiers who held out inside the Malinta Tunnel began committing suicide by detonating explosives within the bowels of the tunnel complex the night of February 23, 1945. The collapsed laterals resulting from these explosions have never been excavated. The soldiers had been trapped themselves after the entrance was blocked as a result of gunfire of .

Today, Malinta Tunnel is the venue of an audio-visual presentation by National Artist Lamberto V. Avellana of events that occurred during World War II
World War II
World War II, or the Second World War , was a global conflict lasting from 1939 to 1945, involving most of the world's nations—including all of the great powers—eventually forming two opposing military alliances: the Allies and the Axis...
, including the evacuation of President Quezon and General MacArthur by Motor Torpedo Boat Squadron Three
Motor Torpedo Boat Squadron Three
Motor Torpedo Boat Squadron Three was a United States Navy squadron based at Cavite, Philippines, from September 1941 to mid-April 1942. It was commanded by then-Lieutenant John D. Bulkeley and made up of six motor torpedo boats: PT 31, PT 32, PT 33, PT 34, PT 35, and PT 41, the last as the...
from Corregidor to Mindanao
Mindanao
Mindanao is the second largest and easternmost island in the Philippines. It is also the name of one of the three island groups in the country, which consists of the island of Mindanao and smaller surrounding islands. The other two are Luzon and the Visayas. The island of Mindanao is called The...
. They were later flown to Australia. Quezon ran a government in exile
Government in exile
A government in exile is a political group that claims to be a country's legitimate government, but for various reasons is unable to exercise its legal power, and instead resides in a foreign country. Governments in exile usually operate under the assumption that they will one day return to their...
in the United States during the war.