Encyclopedia
The Angels of Bataan were the members of the United States Army Nurse Corps and the United States Navy Nurse Corps
United States Navy Nurse Corps
The United States Navy Nurse Corps was officially established by Congress in 1908; however, unofficially, women had been working as nurses aboard Navy ships and in Navy hospitals for nearly 100 years.-Pre-1908:...
who were stationed in the Philippines at the outset of the Pacific War
Pacific War
The Pacific War, also sometimes called the Asia-Pacific War refers broadly to the parts of World War II that took place in the Pacific Ocean, its islands, and in East Asia, then called the Far East...
and served during the Battle of the Philippines (1941–42). When Bataan and Corregidor fell, 11 Navy nurses, 66 army nurses, and 1 nurse-anesthetist were captured and imprisoned in and around Manila. They continued to serve as a nursing unit throughout their status as prisoners of war
Prisoner of war
A prisoner of war or enemy prisoner of war is a person, whether civilian or combatant, who is held in custody by an enemy power during or immediately after an armed conflict...
. After years of hardship, they were finally liberated in February 1945.

At the outset of World War II, US Army and US Navy nurses were stationed at Sternberg General Hospital in Manila, and other military hospitals around Manila. During the Battle of the Philippines (1941–42), eighty-eight US Army nurses escaped, in the last week of December 1941, to Corregidor and Bataan. 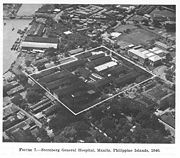 The navy nurses, under the command of Lt. Laura M. Cobb
Laura M. Cobb
Laura Mae Cobb was a member of the United States Navy Nurse Corps who served during World War II. She received numerous decorations for her actions during the defense of Manila and her 37 months as a POW of the Japanese, during which she continued to serve as Chief Nurse for ten other imprisoned...
, stayed behind in Manila during the initial invasion to support the patients there. One of them, Ann A. Bernatitus
Ann A. Bernatitus
Ann Agnes Bernatitus was a United States Navy nurse who served during World War II. In October 1942, she became the first American recipient of the Legion of Merit for her heroism during the siege of Bataan and Corregidor from December 1941 through April 1942...
, escaped from Manila to Bataan just before Manila fell. The remaining 11 navy nurses were captured upon the fall of Manila and interned by the Japanese at Santo Tomas.

In late December 1941, many of the nurses were assigned to a pair of battlefield hospitals on Bataan named Hospital #1 and Hospital #2. These hospitals included the first open-air wards in US history since the Civil War. Tropical diseases, including malaria and dysentery, were widespread among both hospital patients and staff.

Just prior to the fall of Bataan on 9 April 1942, the nurses serving there were ordered to the island fortress of Corregidor by General Wainwright
Jonathan Mayhew Wainwright IV
Jonathan Mayhew "Skinny" Wainwright IV was a career American army officer and the commander of Allied forces in the Philippines at the time of their surrender to the Empire of Japan during World War II...
(commander of the forces in the Philippines after MacArthur was ordered to Australia).

During the Battle of Corregidor, the nurses were stationed in the hospital and wards in the maze of underground tunnels connected to the Malinta Tunnel
Malinta Tunnel
The Malinta Tunnel is a tunnel complex built by the United States Army Corps of Engineers on the island of Corregidor in the Philippines. It was initially used as a bomb-proof storage and personnel bunker, but was later equipped as a 1,000-bed hospital. The main tunnel, running east to west, is ...
. 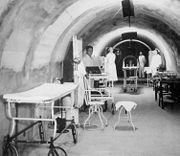 On 29 April, a small group of army nurses were evacuated, with other passengers, aboard a navy PBY Catalina
PBY Catalina
The Consolidated PBY Catalina was an American flying boat of the 1930s and 1940s produced by Consolidated Aircraft. It was one of the most widely used multi-role aircraft of World War II. PBYs served with every branch of the United States Armed Forces and in the air forces and navies of many other...
. On 3 May, the sole Navy nurse, Ann Bernatitus
Ann A. Bernatitus
Ann Agnes Bernatitus was a United States Navy nurse who served during World War II. In October 1942, she became the first American recipient of the Legion of Merit for her heroism during the siege of Bataan and Corregidor from December 1941 through April 1942...
, a few more army nurses, and a small group of civilians were evacuated aboard the submarine .

When Corregidor fell to Japanese forces under the command of General Masaharu Homma
Masaharu Homma
was a general in the Imperial Japanese Army. He is noteworthy for his role in the invasion and occupation of the Philippines during World War II. Homma, who was an amateur painter and playwright, was also known as the Poet General.-Biography:...
on 6 May, the remaining nurses were captured and — on 2 July — transferred to the Santo Tomas Internment Camp.

The campus of the University of Santo Tomas
University of Santo Tomas
The Pontifical and Royal University of Santo Tomas, The Catholic University of the Philippines , is a private Roman Catholic university run by the Order of Preachers in Manila. Founded on April 28, 1611 by archbishop of Manila Miguel de Benavides, it has the oldest extant university charter in the...
was converted to an internment camp by the Japanese during their occupation of the Philippines. The camp is described in detail in The War
The War (documentary)
The War is a 2007 American seven-part documentary television mini-series about World War II from the perspective of the United States that premiered on September 23, 2007...
by Ken Burns
Ken Burns
Kenneth Lauren "Ken" Burns is an American director and producer of documentary films, known for his style of using archival footage and photographs...
. In addition to its civilian population, Santo Tomas became the initial internment camp for both the army and navy nurses, with the army nurses remaining there until their liberation.

Capt. Maude C. Davison, 57 years old and with 20 years of service experience, took command of the nurses, maintained a regular schedule of nursing duty, and insisted that all nurses wear their khaki blouses and skirts while on duty.

In May 1943, the navy nurses, still under the command of Lt. Cobb
Laura M. Cobb
Laura Mae Cobb was a member of the United States Navy Nurse Corps who served during World War II. She received numerous decorations for her actions during the defense of Manila and her 37 months as a POW of the Japanese, during which she continued to serve as Chief Nurse for ten other imprisoned...
, were transferred to a new internment camp at Los Baños, where they established a new infirmary and continued working as a nursing unit. At Los Baños they came to be known as "the sacred eleven."


On the Home Front

While the capture of the nurses was widely publicized in the U.S., little specific information was known of their fate until they were liberated. 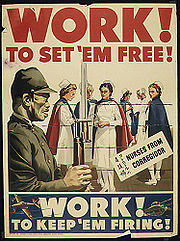 Lt. Juanita Redmond, one of the few nurses to escape, published a memoir of her experiences on Bataan in 1943 that concluded with a dramatic reminder that her colleagues were still prisoners. The nurses' story was dramatized in several wartime movies, including:
When So Proudly We Hail! was shown in the theaters, a recruitment booth staffed with Red Cross volunteers was set up in the lobby.

In January 1944, control of the Santo Tomas Internment Camp changed from Japanese civil authorities to the Imperial Japanese Army
Imperial Japanese Army
-Foundation:During the Meiji Restoration, the military forces loyal to the Emperor were samurai drawn primarily from the loyalist feudal domains of Satsuma and Chōshū...
, with whom it remained until the camp was liberated. Access to outside food sources was curtailed, the diet of the internees was reduced to 960 calories per person per day by November 1944, and further reduced to 700 calories per person per day by January 1945.

A Department of Veterans Affairs study released in April, 2002 found that the nurses lost, on average, 30% of their body weight during internment, and subsequently experienced a degree of service-connected disability "virtually the same as the male ex-POW's of the Pacific Theater." Maude C. Davison's body weight dropped from 156 lbs. to 80 lbs.

Emboldened by the success of the Raid at Cabanatuan
Raid at Cabanatuan
The Raid at Cabanatuan was a rescue of Allied prisoners of war and civilians from a Japanese camp near Cabanatuan City, in the Philippines...
, General Douglas MacArthur
Douglas MacArthur
General of the Army Douglas MacArthur was an American general and field marshal of the Philippine Army. He was a Chief of Staff of the United States Army during the 1930s and played a prominent role in the Pacific theater during World War II. He received the Medal of Honor for his service in the...
ordered Major General Vernon D. Mudge to make an aggressive raid on Santo Tomas in the Battle of Manila (1945). The internees at Santo Tomas, including the nurses, were liberated on 3 February 1945, by a "flying column" of the 1st Cavalry.


The navy nurses were subsequently liberated in the Raid at Los Baños
Raid at Los Baños
The raid at Los Baños in the Philippines, early Friday morning on 23 February 1945, was executed by a combined U.S. Army Airborne and Filipino guerrilla task force, resulting in the liberation of 2,147 Allied civilian and military internees from an agricultural school campus turned Japanese...
.

Upon returning to the U.S., the US Army awarded their nurses, among other decorations, the Bronze Star
Bronze Star Medal
The Bronze Star Medal is a United States Armed Forces individual military decoration that may be awarded for bravery, acts of merit, or meritorious service. As a medal it is awarded for merit, and with the "V" for valor device it is awarded for heroism. It is the fourth-highest combat award of the...
for valor and a Presidential Unit Citation for extraordinary heroism in action. The Navy nurses were likewise awarded Bronze Stars upon their return.

On April 9, 1980, a bronze plaque was dedicated at the Mount Samat
Mount Samat
Mount Samat is a mountain in the town of Pilar, Province of Bataan, in the Republic of the Philippines. Located on the summit of the mountain is Dambana ng Kagitingan or Shrine of Valour, a memorial shrine complex built to honor and remember the gallantry of the Filipino and American soldiers who...
shrine by men who survived Bataan and Corregidor. It reads:

TO THE ANGELS-- In honor of the valiant American military women who gave so much of themselves in the early days of World War II. They provided care and comfort to the gallant defenders of Bataan and Corregidor. They lived on a starvation diet, shared the bombing, strafing, sniping, sickness and disease while working endless hours of heartbreaking duty. These nurses always had a smile, a tender touch and a kind word for their patients. They truly earned the name--THE ANGELS OF BATAAN AND CORREGIDOR."

Maj. Maude C. Davison, credited by many for keeping the army nurses alive by her insistence on the nurses maintaining their identity as nurses throughout their internment, was posthumously awarded the Distinguished Service Medal
Distinguished Service Medal (Army)
The Distinguished Service Medal is a military award of the United States Army that is presented to any person who, while serving in any capacity with the United States military, has distinguished himself or herself by exceptionally meritorious service to the Government in a duty of great...
on August 20, 2001. A similar effort has not yet been undertaken for Chief Nurse Laura M. Cobb
Laura M. Cobb
Laura Mae Cobb was a member of the United States Navy Nurse Corps who served during World War II. She received numerous decorations for her actions during the defense of Manila and her 37 months as a POW of the Japanese, during which she continued to serve as Chief Nurse for ten other imprisoned...
.