Encyclopedia
Lumpsuckers or lumpfish are mostly small scorpaeniform marine fish
Fish
Fish are a paraphyletic group of organisms that consist of all gill-bearing aquatic vertebrate animals that lack limbs with digits. Included in this definition are the living hagfish, lampreys, and cartilaginous and bony fish, as well as various extinct related groups...
of the family
Family (biology)
In biological classification, family is* a taxonomic rank. Other well-known ranks are life, domain, kingdom, phylum, class, order, genus, and species, with family fitting between order and genus. As for the other well-known ranks, there is the option of an immediately lower rank, indicated by the...
Cyclopteridae. They are found in the cold waters of the Arctic
Arctic Ocean
The Arctic Ocean, located in the Northern Hemisphere and mostly in the Arctic north polar region, is the smallest and shallowest of the world's five major oceanic divisions...
, North Atlantic
Atlantic Ocean
The Atlantic Ocean is the second-largest of the world's oceanic divisions. With a total area of about , it covers approximately 20% of the Earth's surface and about 26% of its water surface area...
, and North Pacific
Pacific Ocean
The Pacific Ocean is the largest of the Earth's oceanic divisions. It extends from the Arctic in the north to the Southern Ocean in the south, bounded by Asia and Australia in the west, and the Americas in the east.At 165.2 million square kilometres in area, this largest division of the World...
oceans. The greatest number of species are found in the North Pacific.

The family name Cyclopteridae derives from the Greek
Greek language
Greek is an independent branch of the Indo-European family of languages. Native to the southern Balkans, it has the longest documented history of any Indo-European language, spanning 34 centuries of written records. Its writing system has been the Greek alphabet for the majority of its history;...
words κύκλος (kyklos), meaning "circle", and πτέρυξ (pteryx), meaning "wing" or "fin", in reference to the circle-shaped pectoral fins of most of the fish that comprise this family.

Lumpsuckers are named appropriately enough; their portly bodies are nearly spherical with generally drab coloration and lithic patterns. The "sucker" part refers to the fish's adhesive
Adhesive
An adhesive, or glue, is a mixture in a liquid or semi-liquid state that adheres or bonds items together. Adhesives may come from either natural or synthetic sources. The types of materials that can be bonded are vast but they are especially useful for bonding thin materials...
discs, located ventrally, behind the pectoral fins; the fish use these discs to adhere to the substrate
Substrate (biology)
In biology a substrate is the surface a plant or animal lives upon and grows on. A substrate can include biotic or abiotic materials and animals. For example, encrusting algae that lives on a rock can be substrate for another animal that lives on top of the algae. See also substrate .-External...
. Many species have bony, wart-like tubercle
Tubercle
A tubercle is generally a wart-like projection, but it has slightly different meaning depending on which family of plants or animals it is used to refer to....
s adorning the head and body; these are important taxonomic
Taxonomy
Taxonomy is the science of identifying and naming species, and arranging them into a classification. The field of taxonomy, sometimes referred to as "biological taxonomy", revolves around the description and use of taxonomic units, known as taxa...
features of the family.

The simple, rounded fins are small with the exception of the broad, fan-like pectorals, which actually extend ventrally. The first of the two dorsal fin
Dorsal fin
A dorsal fin is a fin located on the backs of various unrelated marine and freshwater vertebrates, including most fishes, marine mammals , and the ichthyosaurs...
s is spinous, with 4-8 spines; in some species, this fin is completely overgrown with skin and therefore not visible. While the lateral line
Lateral line
The lateral line is a sense organ in aquatic organisms , used to detect movement and vibration in the surrounding water. Lateral lines are usually visible as faint lines running lengthwise down each side, from the vicinity of the gill covers to the base of the tail...
in lumpsuckers is otherwise reduced or absent, it is well developed in the head; some species even have tubular, whisker-like external projections of the opercular canal, which is a part of the cranial lateral line system.

The relatively small mouths of lumpsuckers are lined with narrow rows of small conical
Cone (geometry)
A cone is an n-dimensional geometric shape that tapers smoothly from a base to a point called the apex or vertex. Formally, it is the solid figure formed by the locus of all straight line segments that join the apex to the base...
teeth. The gas bladder
Gas bladder
The swim bladder, gas bladder, fish maw or air bladder is an internal gas-filled organ that contributes to the ability of a fish to control its buoyancy, and thus to stay at the current water depth without having to waste energy in swimming...
is absent. In terms of length, lumpsuckers range in size from two centimetres in the case of Lethotremus awae up to 50 centimetres in the case of the common lumpsucker Cyclopterus lumpus. 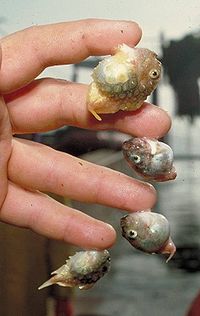 As their appearance might suggest, lumpsuckers are poor swimmers. Most species are benthic
Benthos
Benthos is the community of organisms which live on, in, or near the seabed, also known as the benthic zone. This community lives in or near marine sedimentary environments, from tidal pools along the foreshore, out to the continental shelf, and then down to the abyssal depths.Many organisms...
; that is, they spend most of their time on or near the bottom. The fish are found on rocky or muddy substrates, where their coloration allows for effective camouflage
Camouflage
Camouflage is a method of concealment that allows an otherwise visible animal, military vehicle, or other object to remain unnoticed, by blending with its environment. Examples include a leopard's spotted coat, the battledress of a modern soldier and a leaf-mimic butterfly...
. Members of the family are found primarily on the continental shelf
Continental shelf
The continental shelf is the extended perimeter of each continent and associated coastal plain. Much of the shelf was exposed during glacial periods, but is now submerged under relatively shallow seas and gulfs, and was similarly submerged during other interglacial periods. The continental margin,...
or slope, at depths from 100-1,700 metres. Some of the deeper-living species are however pelagic
Pelagic zone
Any water in a sea or lake that is not close to the bottom or near to the shore can be said to be in the pelagic zone. The word pelagic comes from the Greek πέλαγος or pélagos, which means "open sea". The pelagic zone can be thought of in terms of an imaginary cylinder or water column that goes...
, remaining some distance above the ocean floor.

Benthic species feed on sessile
Sessility (limnology)
In limnology, sessility is that quality of an organism which rests unsupported directly on a base, either attached or unattached to a substrate. It is a characteristic of vegetation which is anchored to the benthic environment. There are two families of sessile rotifers: Flosculariidae and...
invertebrate
Invertebrate
An invertebrate is an animal without a backbone. The group includes 97% of all animal species – all animals except those in the chordate subphylum Vertebrata .Invertebrates form a paraphyletic group...
s such as polychaete
Polychaete
The Polychaeta or polychaetes are a class of annelid worms, generally marine. Each body segment has a pair of fleshy protrusions called parapodia that bear many bristles, called chaetae, which are made of chitin. Indeed, polychaetes are sometimes referred to as bristle worms. More than 10,000...
worms, crustacean
Crustacean
Crustaceans form a very large group of arthropods, usually treated as a subphylum, which includes such familiar animals as crabs, lobsters, crayfish, shrimp, krill and barnacles. The 50,000 described species range in size from Stygotantulus stocki at , to the Japanese spider crab with a leg span...
s and mollusks. Pelagic species target prey they are capable of overtaking, namely slow-moving jellyfish
Jellyfish
Jellyfish are free-swimming members of the phylum Cnidaria. Medusa is another word for jellyfish, and refers to any free-swimming jellyfish stages in the phylum Cnidaria...
and ctenophore
Ctenophore
The Ctenophora are a phylum of animals that live in marine waters worldwide. Their most distinctive feature is the "combs", groups of cilia that they use for swimming, and they are the largest animals that swim by means of cilia – adults of various species range from a few millimeters to in size...
s.

Lumpsuckers are a poorly studied group, with little known of their behaviour and biology. At least some species are known to travel great distances in order to spawn
Spawn (biology)
Spawn refers to the eggs and sperm released or deposited, usually into water, by aquatic animals. As a verb, spawn refers to the process of releasing the eggs and sperm, also called spawning...
in shallow, intertidal waters
Tide pool
Tide pools are rocky pools by oceans that are filled with seawater. Many of these pools exist as separate entities only at low tide.Tide pools are habitats of uniquely adaptable animals that have engaged the special attention of naturalists and marine biologists, as well as philosophical...
(from December to June in the smooth lumpsucker); this may well be true of all species. Males are also known to guard the brood of spherical eggs.

One of the peculiarities of Lumpsuckers neural system is that they lack Mauthner cell
Mauthner cell
The Mauthner Cells are a pair of big and easily identifiable neurons located in the rhombomere 4 of the hindbrain in fish and amphibians that are responsible for a very fast escape reflex...
neurons in their hindbrain, while these cells are present in virtually all other teleost fish. Nevertheless, the lumpsuckers do have a C-startle response, which is apparently mediated by other hindbrain cells.

Hatchlings have well-developed pectoral fins and adhesive pelvic discs, which the fish use to cling to rocks in shallow water. Young fish remain in shallow, warmer water until fully developed. Pacific cod
Pacific Cod
The Pacific cod, Gadus macrocephalus, is an important commercial food species. It is also known as gray cod, gray goo, gray wolf, grayest or grayfish. It has three separate dorsal fins, and the catfish-like whiskers on its lower jaw. In appearance, it is similar to the Atlantic Cod...
and sablefish
Sablefish
The sablefish, Anoplopoma fimbria, is one of two members of the fish family Anoplopomatidae and the only species in the Anoplopoma genus...
are known predators of lumpsuckers.

There are 27 species in 6 genera:
Note: Eumicrotremus eggvinii (Koefoed, 1956) has been shown to be the male of the E. spinosus species.
The source of this article is wikipedia, the free encyclopedia.  The text of this article is licensed under the GFDL.