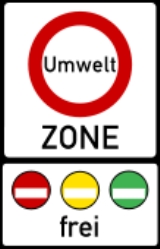 Over 70 cities and towns in 8 countries around Europe operate or are preparing Low Emission Zones, or LEZs, to help meet the EU health-based air quality limit values, where the most polluting vehicles are regulated. This means that vehicles may be banned or in some cases charged if they enter the LEZ when their emissions are over a set level.
Different vehicles are regulated, depending on the local conditions. All LEZs affect heavy duty vehicles, some affect diesel vans, others also affect diesel and petrol cars; in Italy, motor cycles and three-wheelers are also included.

A Publicly Funded website run by a network of cities and ministries operating or preparing LEZs, with EU part funding gives up-to-date information on LEZs, such as which cities have LEZs, the vehicle types affected, the required emissions standards and their application dates.

In Germany, an LEZ is called Umweltzone (environmental zone). There are currently 47 LEZs in operation or planning in Germany. The cities of Berlin
Berlin
Berlin is the capital city of Germany and is one of the 16 states of Germany. With a population of 3.45 million people, Berlin is Germany's largest city. It is the second most populous city proper and the seventh most populous urban area in the European Union...
, Cologne
Cologne
Cologne is Germany's fourth-largest city , and is the largest city both in the Germany Federal State of North Rhine-Westphalia and within the Rhine-Ruhr Metropolitan Area, one of the major European metropolitan areas with more than ten million inhabitants.Cologne is located on both sides of the...
and Hanover
Hanover
Hanover or Hannover, on the river Leine, is the capital of the federal state of Lower Saxony , Germany and was once by personal union the family seat of the Hanoverian Kings of Great Britain, under their title as the dukes of Brunswick-Lüneburg...
started LEZs in their respective central city areas on 1 January 2008. LEZs also came into effect in the cities of Mannheim
Mannheim
Mannheim is a city in southwestern Germany. With about 315,000 inhabitants, Mannheim is the second-largest city in the Bundesland of Baden-Württemberg, following the capital city of Stuttgart....
and Stuttgart
Stuttgart
Stuttgart is the capital of the state of Baden-Württemberg in southern Germany. The sixth-largest city in Germany, Stuttgart has a population of 600,038 while the metropolitan area has a population of 5.3 million ....
on 1 March 2008. More cities followed the years after.

The cities of Gothenburg
Gothenburg
Gothenburg is the second-largest city in Sweden and the fifth-largest in the Nordic countries. Situated on the west coast of Sweden, the city proper has a population of 519,399, with 549,839 in the urban area and total of 937,015 inhabitants in the metropolitan area...
, Lund
Lund
-Main sights:During the 12th and 13th centuries, when the town was the seat of the archbishop, many churches and monasteries were built. At its peak, Lund had 27 churches, but most of them were demolished as result of the Reformation in 1536. Several medieval buildings remain, including Lund...
, Malmö
Malmö
Malmö , in the southernmost province of Scania, is the third most populous city in Sweden, after Stockholm and Gothenburg.Malmö is the seat of Malmö Municipality and the capital of Skåne County...
, Helsingborg, Mölndal and Stockholm
Stockholm
Stockholm is the capital and the largest city of Sweden and constitutes the most populated urban area in Scandinavia. Stockholm is the most populous city in Sweden, with a population of 851,155 in the municipality , 1.37 million in the urban area , and around 2.1 million in the metropolitan area...
have Low Emission Zones.

The Mayor of London
Mayor of London
The Mayor of London is an elected politician who, along with the London Assembly of 25 members, is accountable for the strategic government of Greater London. Conservative Boris Johnson has held the position since 4 May 2008...
announced establishment of a Low Emission Zone which came into effect on 4 February 2008 covering almost all of Greater London
Greater London
Greater London is the top-level administrative division of England covering London. It was created in 1965 and spans the City of London, including Middle Temple and Inner Temple, and the 32 London boroughs. This territory is coterminate with the London Government Office Region and the London...
- the largest such zone in the world. London
London
London is the capital city of :England and the :United Kingdom, the largest metropolitan area in the United Kingdom, and the largest urban zone in the European Union by most measures. Located on the River Thames, London has been a major settlement for two millennia, its history going back to its...
currently has levels of air pollution
Air pollution
Air pollution is the introduction of chemicals, particulate matter, or biological materials that cause harm or discomfort to humans or other living organisms, or cause damage to the natural environment or built environment, into the atmosphere....
among the worst in Europe
Europe
Europe is, by convention, one of the world's seven continents. Comprising the westernmost peninsula of Eurasia, Europe is generally 'divided' from Asia to its east by the watershed divides of the Ural and Caucasus Mountains, the Ural River, the Caspian and Black Seas, and the waterways connecting...
and road transport related emissions
Emission standard
Emission standards are requirements that set specific limits to the amount of pollutants that can be released into the environment. Many emissions standards focus on regulating pollutants released by automobiles and other powered vehicles but they can also regulate emissions from industry, power...
account for around half of total emissions of PM10 and NOx
NOx
NOx is a generic term for the mono-nitrogen oxides NO and NO2 . They are produced from the reaction of nitrogen and oxygen gases in the air during combustion, especially at high temperatures...
in the capital. The Low Emission Zone will target emissions of these pollutants from older diesel-engined lorries
Truck
A truck or lorry is a motor vehicle designed to transport cargo. Trucks vary greatly in size, power, and configuration, with the smallest being mechanically similar to an automobile...
, bus
Bus
A bus is a road vehicle designed to carry passengers. Buses can have a capacity as high as 300 passengers. The most common type of bus is the single-decker bus, with larger loads carried by double-decker buses and articulated buses, and smaller loads carried by midibuses and minibuses; coaches are...
es, coaches
Coach (vehicle)
A coach is a large motor vehicle, a type of bus, used for conveying passengers on excursions and on longer distance express coach scheduled transport between cities - or even between countries...
, van
Van
A van is a kind of vehicle used for transporting goods or groups of people.In British English usage, it can be either specially designed or based on a saloon or sedan car, the latter type often including derivatives with open backs...
s, minibus
Minibus
A minibus or minicoach is a passenger carrying motor vehicle that is designed to carry more people than a multi-purpose vehicle or minivan, but fewer people than a full-size bus. In the United Kingdom, the word "minibus" is used to describe any full-sized passenger carrying van. Minibuses have a...
es and other heavy vehicles that are derived from lorries and vans such as motor caravans and motorised horse boxes. There will be a phased introduction of the scheme from 4 February 2008 through to January 2012. Different vehicles will be affected over time and increasingly tougher emissions standards will apply.