A coach is a large motor vehicle
Motor vehicle
A motor vehicle or road vehicle is a self-propelled wheeled vehicle that does not operate on rails, such as trains or trolleys. The vehicle propulsion is provided by an engine or motor, usually by an internal combustion engine, or an electric motor, or some combination of the two, such as hybrid...
, a type of bus
Bus
A bus is a road vehicle designed to carry passengers. Buses can have a capacity as high as 300 passengers. The most common type of bus is the single-decker bus, with larger loads carried by double-decker buses and articulated buses, and smaller loads carried by midibuses and minibuses; coaches are...
, used for conveying passengers on excursions and on longer distance express coach scheduled transport
Coach (scheduled transport)
Coach scheduled transport is a mode of public transport by motor coach which is used in many countries around the world for longer distance journeys...
between cities - or even between countries. Unlike buses designed for shorter journeys, coaches often have a luggage hold separate from the passenger cabin and are normally equipped with facilities required for longer trips including comfortable seats and sometimes a toilet.

The term 'coach' was previously used for a horse-drawn carriage
Coach (carriage)
A coach was originally a large, usually closed, four-wheeled carriage with two or more horses harnessed as a team, controlled by a coachman and/or one or more postilions. It had doors in the sides, with generally a front and a back seat inside and, for the driver, a small, usually elevated seat in...
designed for the conveyance of more than one passenger
Passenger
A passenger is a term broadly used to describe any person who travels in a vehicle, but bears little or no responsibility for the tasks required for that vehicle to arrive at its destination....
, the passengers' luggage, and mail
Mail
Mail, or post, is a system for transporting letters and other tangible objects: written documents, typically enclosed in envelopes, and also small packages are delivered to destinations around the world. Anything sent through the postal system is called mail or post.In principle, a postal service...
, that is covered for protection from the elements. The term was applied to railway carriages in the 19th century, and later to motor coaches (buses).

Horse drawn chariot
Chariot
The chariot is a type of horse carriage used in both peace and war as the chief vehicle of many ancient peoples. Ox carts, proto-chariots, were built by the Proto-Indo-Europeans and also built in Mesopotamia as early as 3000 BC. The original horse chariot was a fast, light, open, two wheeled...
s and carriages
Coach (carriage)
A coach was originally a large, usually closed, four-wheeled carriage with two or more horses harnessed as a team, controlled by a coachman and/or one or more postilions. It had doors in the sides, with generally a front and a back seat inside and, for the driver, a small, usually elevated seat in...
('coaches') were used by the wealthy and powerful where the roads were of a high enough standard from possibly 3000BC. In Hungary during the reign of King Matthias Corvinus in the 15th century, the wheelwrights of Kocs
Kocs
Kocs is a village in Komárom-Esztergom county, Hungary. It lies west of Tata and west of Budapest.-History:Kocs is best known internationally as giving rise to the English word coach and its equivalents in nearly all European languages, for example: Czech koč, German kutsche, Dutch koets,...
began to build a horse-drawn vehicle with steel-spring suspension. This "cart of Kocs" as the Hungarians called it (kocsi szekér) soon became popular all over Europe. The imperial post service, employed the first horse-drawn mail coaches in Europe since Roman times in 1650, - as they started in the town of Kocs the use of these mail coaches gave rise to the term "coach". Stagecoach
Stagecoach
A stagecoach is a type of covered wagon for passengers and goods, strongly sprung and drawn by four horses, usually four-in-hand. Widely used before the introduction of railway transport, it made regular trips between stages or stations, which were places of rest provided for stagecoach travelers...
es (drawn by horses) were used for transport between cities from about 1500 in the United Kingdom
United Kingdom
The United Kingdom of Great Britain and Northern IrelandIn the United Kingdom and Dependencies, other languages have been officially recognised as legitimate autochthonous languages under the European Charter for Regional or Minority Languages...
until displaced by the arrival of the railways.

One of the earliest motorised vehicles was the Charabanc
Charabanc
A charabanc or "char-à-banc" is a type of horse-drawn vehicle or early motor coach, usually open-topped, common in Britain during the early part of the 20th century. It was especially popular for sight-seeing or "works outings" to the country or the seaside, organised by businesses once a year...
s which was used for short journeys and excursions until the early years of the 20th century. The first 'motor coaches' were purchased by operators of those horse-drawn vehicle
Horse-drawn vehicle
A horse-drawn vehicle is a mechanized piece of equipment pulled by one horse or by a team of horses. These vehicles typically had two or four wheels and were used to carry passengers and/or a load...
s in the early 1900s by operators such as Royal Blue Coach Services
Royal Blue Coach Services
Royal Blue Coach Services was a coach operator in the south and west of England from 1880 until 1986.-Origins:The Royal Blue business was started in 1880 by Thomas Elliott in Bournemouth. The business, at first known as Royal Blue and Branksome Mews, included the hire of every kind of horse-drawn...
who purchased their first Charabanc in 1913 and were running were running 72 coaches by 1926. 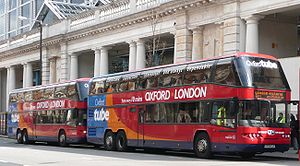 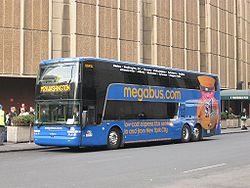 Coaches vary considerably in quality from country to country and even within counties. Higher specification vehicles include reclining upholstered seats, air-conditioning, overhead storage bins, passenger-controlled lights and ventilation. In addition small tables for small snacks, small video screens to show TV shows and/or videos and larger items of luggage are stored below the floor, and are accessible from outside panels. A toilet will normally be included. Coach typically have a single door and possibly also a wheelchair
Wheelchair
A wheelchair is a chair with wheels, designed to be a replacement for walking. The device comes in variations where it is propelled by motors or by the seated occupant turning the rear wheels by hand. Often there are handles behind the seat for someone else to do the pushing...
-lift access.

Major manufacturers include Plaxton
Plaxton
Plaxton is a builder of bus and coach vehicle bodies based in Scarborough, England.-History:The Plaxton of today is the successor to a business founded in Scarborough in 1907 by Frederick William Plaxton.-Beginnings:...
, Neoplan
Neoplan
NEOPLAN Bus GmbH is a German automotive company that manufactures buses, trolleybuses and coaches. NEOPLAN is now a subsidiary of NEOMAN Bus GmbH, which itself is a part of MAN SE.-Foundations:...
, Marcopolo, Irizar
Irizar
Irizar Group is a Spanish-based builder of luxury coach vehicle bodies, established in 1889. It is located in Ormaiztegi in the Basque Country, Spain...
, Scania and many others. It is reasonably common for one manufacturer to build and supply a chassis and for another to then construct the 'coachwork' (the passenger compartment) onto this chassis.

A representative selection of vehicles currently in use in different parts of the world.