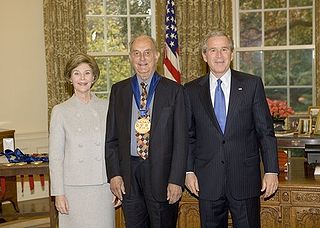 Louis Stanton Auchincloss (ˈɔːkɨŋklɒs; September 27, 1917January 26, 2010) was an American lawyer, novelist, historian, and essayist. He is best known as a prolific novelist who parlayed his firsthand knowledge into dozens of finely wrought books exploring the private lives of America's East Coast
East Coast of the United States
The East Coast of the United States, also known as the Eastern Seaboard, refers to the easternmost coastal states in the United States, which touch the Atlantic Ocean and stretch up to Canada. The term includes the U.S...
patrician class
American upper class
See: millionaire for more details-Millionaires:See also: MillionairesHouseholds with net worths of $1 million or more may be identified as members of the upper-most socio-economic demographic, depending on the class model used...
(especially the world of Wall Street
Wall Street
Wall Street refers to the financial district of New York City, named after and centered on the eight-block-long street running from Broadway to South Street on the East River in Lower Manhattan. Over time, the term has become a metonym for the financial markets of the United States as a whole, or...
bankers, lawyer
Lawyer
A lawyer, according to Black's Law Dictionary, is "a person learned in the law; as an attorney, counsel or solicitor; a person who is practicing law." Law is the system of rules of conduct established by the sovereign government of a society to correct wrongs, maintain the stability of political...
s and stockbrokers). His dry, ironic works of fiction continued the tradition of Henry James
Henry James
Henry James, OM was an American-born writer, regarded as one of the key figures of 19th-century literary realism. He was the son of Henry James, Sr., a clergyman, and the brother of philosopher and psychologist William James and diarist Alice James....
and Edith Wharton
Edith Wharton
Edith Wharton , was a Pulitzer Prize-winning American novelist, short story writer, and designer.- Early life and marriage:...
.

Gore Vidal
Gore Vidal
Gore Vidal is an American author, playwright, essayist, screenwriter, and political activist. His third novel, The City and the Pillar , outraged mainstream critics as one of the first major American novels to feature unambiguous homosexuality...
said, "Of all our novelists, Auchincloss is the only one who tells us how our rulers behave in their banks and their boardrooms, their law offices and their clubs.... Not since Dreiser
Theodore Dreiser
Theodore Herman Albert Dreiser was an American novelist and journalist of the naturalist school. His novels often featured main characters who succeeded at their objectives despite a lack of a firm moral code, and literary situations that more closely resemble studies of nature than tales of...
has an American writer had so much to tell us about the role of money in our lives."

Born in Lawrence
Lawrence, Nassau County, New York
Lawrence is a village in Nassau County, New York in the USA. As of the United States 2010 Census, the village population was 6,483.The Village of Lawrence is in the southwest corner of the Town of Hempstead, adjoining the border with the New York City borough of Queens to the west and near the...
, New York
New York
New York is a state in the Northeastern region of the United States. It is the nation's third most populous state. New York is bordered by New Jersey and Pennsylvania to the south, and by Connecticut, Massachusetts and Vermont to the east...
, Auchincloss was the son of Priscilla Dixon (née Stanton) and Joseph Howland Auchincloss. His paternal grandfather, John Winthrop Auchincloss, was the brother of Edgar Stirling Auchincloss (father of James C. Auchincloss
James C. Auchincloss
James Coats Auchincloss was an American businessman and Republican Party politician who represented in the United States House of Representatives from 1943–1965....
) and Hugh Dudley Auchincloss (father of Hugh D. Auchincloss, Jr.). He grew up among the privileged people about whom he would write, although, as he put it, "There was never an Auchincloss fortune…each generation of Auchincloss men either made or married its own money". He attended Groton School
Groton School
Groton School is a private, Episcopal, college preparatory boarding school located in Groton, Massachusetts, U.S. It enrolls approximately 375 boys and girls, from the eighth through twelfth grades...
and Yale University
Yale University
Yale University is a private, Ivy League university located in New Haven, Connecticut, United States. Founded in 1701 in the Colony of Connecticut, the university is the third-oldest institution of higher education in the United States...
, where he was editor of the Yale Literary Magazine
Yale Literary Magazine
The Yale Literary Magazine, founded in 1836, is the oldest literary magazine in the United States and publishes poetry and fiction by Yale undergraduates twice per academic year.The magazine is published biannually...
. Although he did not complete his undergraduate studies at Yale, he was admitted to and attended law school at the University of Virginia
University of Virginia
The University of Virginia is a public research university located in Charlottesville, Virginia, United States, founded by Thomas Jefferson...
. He graduated in 1941 and was admitted to the New York bar the same year.

Auchincloss was an associate at Sullivan & Cromwell
Sullivan & Cromwell
Sullivan & Cromwell LLP is an international law firm headquartered in New York. The firm has approximately 800 lawyers in 12 offices, located in financial centers in the United States, Asia, Australia and Europe. Sullivan & Cromwell was founded by Algernon Sydney Sullivan and William Nelson...
from 1941 to 1951 (with an interruption for war service from 1941 to 1945 in the United States Navy
United States Navy
The United States Navy is the naval warfare service branch of the United States Armed Forces and one of the seven uniformed services of the United States. The U.S. Navy is the largest in the world; its battle fleet tonnage is greater than that of the next 13 largest navies combined. The U.S...
during World War II
World War II
World War II, or the Second World War , was a global conflict lasting from 1939 to 1945, involving most of the world's nations—including all of the great powers—eventually forming two opposing military alliances: the Allies and the Axis...
, which might have inspired his 1947 novel "The Indifferent Children"). After taking a break to pursue full-time writing, Auchincloss returned to working as a lawyer, firstly as an associate (1954–58) and then as a partner (1958–86) at Hawkins, Delafield and Wood in New York City as a wills and trusts attorney, while writing at the rate of a book a year.

Auchincloss is known for his closely observed portraits of old New York and New England society. Among his best-known books are the multi-generational sagas The House of Five Talents (1960), Portrait in Brownstone (1962), and East Side Story (2004). Other well-known novels include The Rector of Justin (1964), the tale of a renowned headmaster of a school like Groton trying to deal with changing times, and The Embezzler (1966), a look at white-collar crime
White-collar crime
Within the field of criminology, white-collar crime has been defined by Edwin Sutherland as "a crime committed by a person of respectability and high social status in the course of his occupation" . Sutherland was a proponent of Symbolic Interactionism, and believed that criminal behavior was...
.

Auchincloss's The Great World and Timothy Colt (1956) was adapted for television in an episode of the Climax! series (Season 4, Episode 22; Broadcast 27 March 1958).