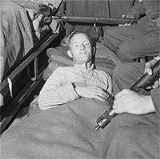 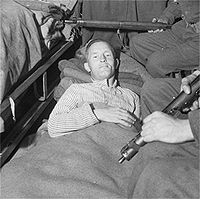 Through such broadcasts, the Reich Ministry of Public Enlightenment and Propaganda attempted to discourage and demoralize British, Canadian, Australian and American troops and the British population within radio listening range, to suppress the effectiveness of the Allied war effort through propaganda, and to motivate the Allies to agree to peace terms leaving the Nazi regime intact and in power. Among many techniques used, the Nazi broadcasts prominently reported on the shooting down of Allied aircraft and the sinking of Allied ships, presenting discouraging reports of high losses and casualties among Allied forces. Although the broadcasts were widely known to be Nazi propaganda, they frequently offered the only details available from behind enemy lines concerning the fate of friends and relatives who did not return from bombing raids over Germany. As a result, Allied troops and civilians frequently listened to Lord Haw-Haw's broadcasts in spite of the sometimes infuriating content and frequent inaccuracies and exaggerations, in the hopes of learning clues about the fate of Allied troops and air crews. Mass Observation interviews warned the Ministry of Information of this and as a result more attention was given to the official reports of British military casualties.

The pseudonym
Pseudonym
A pseudonym is a name that a person assumes for a particular purpose and that differs from his or her original orthonym...
ous radio critic Jonah Barrington
Jonah Barrington (journalist)
Jonah Barrington was the pseudonym of Cyril Carr Dalmaine the radio critic of the Daily Express, a British newspaper, during the Second World War....
of the Daily Express
Daily Express
The Daily Express switched from broadsheet to tabloid in 1977 and was bought by the construction company Trafalgar House in the same year. Its publishing company, Beaverbrook Newspapers, was renamed Express Newspapers...
was the first to use the epithet to describe a German broadcaster, in an attempt to reduce his possible impact: "He speaks English of the haw-haw, dammit-get-out-of-my-way-variety". However, the history of the name is somewhat confused; it was actually applied to a number of different announcers. Even soon after Barrington coined the nickname, it was uncertain exactly which German broadcaster he was describing. Some British media and listeners just used "Lord Haw-Haw" as a generic term to describe all English-language German broadcasters, although other nicknames, like "Sinister Sam", were occasionally used by the BBC to distinguish between obviously different speakers. Poor reception may have contributed to some listeners' difficulties in distinguishing between broadcasters.

In reference to the nickname, American
United States
The United States of America is a federal constitutional republic comprising fifty states and a federal district...
pro-Nazi broadcaster Fred W. Kaltenbach was given the moniker Lord Hee-Haw by the British media. The Lord Hee-Haw name, however, was used for a time by The Daily Telegraph
The Daily Telegraph
The Daily Telegraph is a daily morning broadsheet newspaper distributed throughout the United Kingdom and internationally. The newspaper was founded by Arthur B...
to refer to Lord Haw-Haw, generating some confusion between nicknames and broadcasters.


Announcers associated with the nickname

A number of announcers could have been Lord Haw-Haw:

William Joyce replaced Mittler in 1939. Joyce was American-born and raised in Ireland
Ireland
Ireland is an island to the northwest of continental Europe. It is the third-largest island in Europe and the twentieth-largest island on Earth...
and as a teenager he informed on the IRA
Irish Republican Army
The Irish Republican Army was an Irish republican revolutionary military organisation. It was descended from the Irish Volunteers, an organisation established on 25 November 1913 that staged the Easter Rising in April 1916...
rebels to the British forces during the Anglo-Irish War. He was also a senior member of the British Union of Fascists
British Union of Fascists
The British Union was a political party in the United Kingdom formed in 1932 by Sir Oswald Mosley as the British Union of Fascists, in 1936 it changed its name to the British Union of Fascists and National Socialists and then in 1937 to simply the British Union...
and fled England when tipped off about his planned internment on 26 August 1939. In February 1940, the BBC noted that the Lord Haw-Haw of the early war days (possibly Mittler) was now rarely heard on the air and had been replaced by a new spokesman. Joyce was the main German broadcaster in English for most of the war, and became a naturalised German citizen; he is usually regarded as Lord Haw-Haw, even though he was probably not the person to whom the term originally referred. He had a peculiar hybrid accent that was not of the conventional upper class variety. His distinctive pronunciation of "Jairmany calling, Jairmany calling", which could be described as a "nasal drawl", may have been the result of a fight as a schoolboy that left him with a broken nose.

Joyce, initially an anonymous broadcaster like the others, eventually revealed his real name to his listeners. The Germans actually capitalized on the fame of the Lord Haw-Haw nickname and came to announce him as "William Joyce, otherwise known as Lord Haw-Haw".

After Joyce took over, Mittler was paired with the American-born announcer Mildred Gillars in the Axis Sally
Axis Sally
Axis Sally can refer to:*Mildred Gillars, German-American female radio personality during World War II, best known for her propaganda broadcasts for Nazi Germany...
programme and also broadcast to ANZAC forces in North Africa
North Africa
North Africa or Northern Africa is the northernmost region of the African continent, linked by the Sahara to Sub-Saharan Africa. Geopolitically, the United Nations definition of Northern Africa includes eight countries or territories; Algeria, Egypt, Libya, Morocco, South Sudan, Sudan, Tunisia, and...
. Mittler survived the war and appeared on postwar German radio, and occasionally television
Television
Television is a telecommunication medium for transmitting and receiving moving images that can be monochrome or colored, with accompanying sound...
, until his death. Baillie-Stewart was sentenced to five years' imprisonment. Joyce was captured by British forces in northern Germany just as the war ended, tried, and eventually hanged
Hanging
Hanging is the lethal suspension of a person by a ligature. The Oxford English Dictionary states that hanging in this sense is "specifically to put to death by suspension by the neck", though it formerly also referred to crucifixion and death by impalement in which the body would remain...
for treason
Treason
In law, treason is the crime that covers some of the more extreme acts against one's sovereign or nation. Historically, treason also covered the murder of specific social superiors, such as the murder of a husband by his wife. Treason against the king was known as high treason and treason against a...
on 3 January 1946. Joyce's defence team, appointed by the court, argued that, as an American citizen and naturalised German, Joyce could not have been convicted of treason against the British Crown. However, the prosecution successfully argued that, on the basis of a technicality about having lied about his nationality to obtain a British passport and to vote, Joyce owed allegiance to the king.

The decision to hang him was made perhaps because of the fear his alleged omniscience
Omniscience
Omniscience omniscient point-of-view in writing) is the capacity to know everything infinitely, or at least everything that can be known about a character including thoughts, feelings, life and the universe, etc. In Latin, omnis means "all" and sciens means "knowing"...
had inspired. As J. A. Cole has written, "the British public would not have been surprised if, in that Flensburg wood, Haw-Haw had carried in his pocket a secret weapon capable of annihilating an armoured brigade". This mood was reflected in the wartime film Sherlock Holmes and the Voice of Terror
Sherlock Holmes and the Voice of Terror
Sherlock Holmes and the Voice of Terror is the third film in the Basil Rathbone/Nigel Bruce series of Sherlock Holmes movies. Made in 1942, the film combines elements of the Arthur Conan Doyle story "His Last Bow" and loosely parallels the real-life activities of Lord Haw-haw...
starring Basil Rathbone
Basil Rathbone
Sir Basil Rathbone, KBE, MC, Kt was an English actor. He rose to prominence in England as a Shakespearean stage actor and went on to appear in over 70 films, primarily costume dramas, swashbucklers, and, occasionally, horror films...
and Nigel Bruce
Nigel Bruce
William Nigel Ernle Bruce , best known as Nigel Bruce, was a British character actor on stage and screen. He was best known for his portrayal of Doctor Watson in a series of films and in the radio series The New Adventures of Sherlock Holmes...
, in which Joyce's broadcasts are shown to predict actual disasters and defeats, thus seriously undermining British morale.

Other British subjects willingly made propaganda broadcasts, including Raymond David Hughes
Raymond David Hughes
Raymond Davies Hughes , from Mold, north Wales, was a Welsh RAF airman who made propaganda broadcasts in Welsh for the Nazi Party during World War II.-Early life:...
, who broadcast on the German Radio Metropole, and John Amery
John Amery
John Amery was a British fascist who proposed to the Wehrmacht the formation of a British volunteer force and made recruitment efforts and propaganda broadcasts for Nazi Germany...
, while others, like P. G. Wodehouse
P. G. Wodehouse
Sir Pelham Grenville Wodehouse, KBE was an English humorist, whose body of work includes novels, short stories, plays, poems, song lyrics, and numerous pieces of journalism. He enjoyed enormous popular success during a career that lasted more than seventy years and his many writings continue to be...
, were tricked into doing so. An MI5 investigation published after Wodehouse's death found no evidence of treachery.