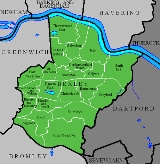 Overview
The London Borough of Bexley lies in south east Greater London
Greater London
Greater London is the top-level administrative division of England covering London. It was created in 1965 and spans the City of London, including Middle Temple and Inner Temple, and the 32 London boroughs. This territory is coterminate with the London Government Office Region and the London...
, and is a borough referred to as part of Outer London
Outer London
Outer London is the name for the group of London Boroughs that form a ring around Inner London.These were areas that were not part of the County of London and became formally part of Greater London in 1965...
. It has common borders with the London Borough of Bromley
London Borough of Bromley
The London Borough of Bromley is a London borough of south east London, England and forms part of Outer London. The principal town in the borough is Bromley.-Geography:...
to the south, the London Borough of Greenwich
London Borough of Greenwich
The London Borough of Greenwich is an Inner London borough in south-east London, England. Taking its name from the historic town of Greenwich, the present borough was formed in 1965 by the amalgamation of the former area of the Metropolitan Borough of Greenwich with part of the Metropolitan...
to the west, across the River Thames
River Thames
The River Thames flows through southern England. It is the longest river entirely in England and the second longest in the United Kingdom. While it is best known because its lower reaches flow through central London, the river flows alongside several other towns and cities, including Oxford,...
to the north it borders the London Borough of Havering
London Borough of Havering
The London Borough of Havering is a London borough in North East London, England and forms part of Outer London. The principal town in Havering is Romford and the other main communities are Hornchurch, Upminster and Rainham. The borough is mainly characterised by suburban development with large...
, the London Borough of Barking and Dagenham
London Borough of Barking and Dagenham
In 1801, the civil parishes that form the modern borough had a total population of 1,937; and the area was characterised by farming, woodland and the fishing fleet at Barking. This last industry employed 1,370 men and boys by 1850, but by the end of the century had ceased to exist; replaced by...
and a small boundary with the unitary authority Thurrock
Thurrock
Thurrock is a unitary authority with borough status in the English ceremonial county of Essex. It is part of the London commuter belt and an area of regeneration within the Thames Gateway redevelopment zone. The local authority is Thurrock Council....
to the north east, to the east it borders the Dartford borough
Dartford (borough)
Dartford is the name given to a local government district and borough in north west Kent, England, which takes its name from its administrative capital. It borders Thurrock, to the north across the River Thames; to the west lies the London Borough of Bexley; to the south Sevenoaks district; and the...
in Kent and to the south east a tiny boundary with the Sevenoaks district
Sevenoaks (district)
Sevenoaks is a local government district covering the western most part of Kent in England. Its council is based in the town of Sevenoaks. It was formed on 1 April 1974, under the Local Government Act 1972, by a merger of the Sevenoaks Urban District, Sevenoaks Rural District and part of Dartford...
of Kent.

The borough is within the Thames Gateway
Thames Gateway
The Thames Gateway is an area of land stretching east from inner east London on both sides of the River Thames and the Thames Estuary. The area, which includes much brownfield land, has been designated a national priority for urban regeneration, taking advantage of the development opportunities...
, an area designated as a national priority for urban regeneration.
Prior to the 19th century the area now forming the Borough was practically unoccupied: very few of the present settlements were mentioned in the Domesday Book
Domesday Book
Domesday Book , now held at The National Archives, Kew, Richmond upon Thames in South West London, is the record of the great survey of much of England and parts of Wales completed in 1086...
, although the village of Bexley has a charter dated 814CE.