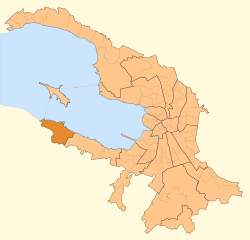 It is the site of an 18th century park
Park
A park is a protected area, in its natural or semi-natural state, or planted, and set aside for human recreation and enjoyment, or for the protection of wildlife or natural habitats. It may consist of rocks, soil, water, flora and fauna and grass areas. Many parks are legally protected by...
and palace
Palace
A palace is a grand residence, especially a royal residence or the home of a head of state or some other high-ranking dignitary, such as a bishop or archbishop. The word itself is derived from the Latin name Palātium, for Palatine Hill, one of the seven hills in Rome. In many parts of Europe, the...
complex (see Oranienbaum
Oranienbaum, Russia
Oranienbaum is a Russian royal residence, located on the Gulf of Finland west of St. Petersburg. The Palace ensemble and the city centre are UNESCO World Heritage Sites.-History:...
). The palace is the only one of the famous palaces in the vicinity of St. Petersburg that was not captured by the Germans during World War II
World War II
World War II, or the Second World War , was a global conflict lasting from 1939 to 1945, involving most of the world's nations—including all of the great powers—eventually forming two opposing military alliances: the Allies and the Axis...
.

The original name of the town is Oranienbaum, which means "orange tree" in German
German language
German is a West Germanic language, related to and classified alongside English and Dutch. With an estimated 90 – 98 million native speakers, German is one of the world's major languages and is the most widely-spoken first language in the European Union....
(in modern German, the word is Orangenbaum). It was initially applied to the palace complex, which had greenhouse
Greenhouse
A greenhouse is a building in which plants are grown. These structures range in size from small sheds to very large buildings...
s for exotic plants. Its present name honors the scientist
Scientist
A scientist in a broad sense is one engaging in a systematic activity to acquire knowledge. In a more restricted sense, a scientist is an individual who uses the scientific method. The person may be an expert in one or more areas of science. This article focuses on the more restricted use of the word...
, poet
Poet
A poet is a person who writes poetry. A poet's work can be literal, meaning that his work is derived from a specific event, or metaphorical, meaning that his work can take on many meanings and forms. Poets have existed since antiquity, in nearly all languages, and have produced works that vary...
and glassblower
Glassblowing
Glassblowing is a glassforming technique that involves inflating molten glass into a bubble, or parison, with the aid of a blowpipe, or blow tube...
Mikhail Lomonosov
Mikhail Lomonosov
Mikhail Vasilyevich Lomonosov was a Russian polymath, scientist and writer, who made important contributions to literature, education, and science. Among his discoveries was the atmosphere of Venus. His spheres of science were natural science, chemistry, physics, mineralogy, history, art,...
. In 1754, Lomonosov founded a colored-glass factory near Oranienbaum, in the village of Ust-Ruditsa. A third, unofficial name, Rambov (a contraction of "Oranienbaum") is popular among the locals.

Lomonosov can be reached by suburban train from St. Petersburg's Baltic Terminal to Oranienbaum Station.

The Great Palace with the Lower Park is an outstanding artistic complex of the first quarter of the eighteenth century. It was built in 1710-25 opposite Kronstadt, in the neighbourhood of the royal residence Peterhof, by the architects Giovanni Mario Fontana and Gottfried Johann Schadel and was intended for Alexander Menshikov, a close associate of Peter the Great.

The city was the birthplace of Igor Stravinsky
Igor Stravinsky
Igor Fyodorovich Stravinsky ; 6 April 1971) was a Russian, later naturalized French, and then naturalized American composer, pianist, and conductor....
(1882–1971), a composer
Composer
A composer is a person who creates music, either by musical notation or oral tradition, for interpretation and performance, or through direct manipulation of sonic material through electronic media...
of modern classical music, and footballer Aleksandr Mostovoi.