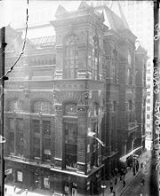 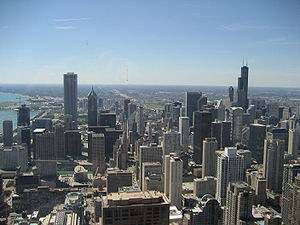 Chicago has another building under construction that is planned to exceed 1000 feet (304.8 m) in height, though construction has been on hold, with the building incomplete, since early 2008: the 1047 feet (319 m) Waterview Tower
Waterview Tower
Waterview Tower is a partially constructed residential skyscraper in downtown Chicago, Illinois, United States. The original plan called for it to be tall. The plan as of July 2011 is to build a 65-story, 500-unit luxury apartment building....
. The 150-story Chicago Spire, originally planned for completion in 2012, has been canceled.

This list ranks Chicago skyscrapers that stand at least 550 feet (168 m) tall, based on standard height measurement. This height includes spire
Spire
A spire is a tapering conical or pyramidal structure on the top of a building, particularly a church tower. Etymologically, the word is derived from the Old English word spir, meaning a sprout, shoot, or stalk of grass....
s and architectural details but does not include antenna mast
Radio masts and towers
Radio masts and towers are, typically, tall structures designed to support antennas for telecommunications and broadcasting, including television. They are among the tallest man-made structures...
s. An equal sign (=) following a rank indicates the same height between two or more buildings. The "Year" column indicates the year in which a building was completed. 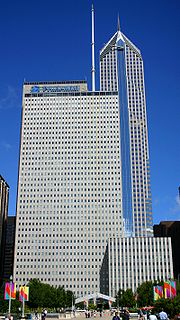 This list ranks Chicago skyscrapers based on their pinnacle height, which includes radio masts and antennas. As architectural features and spires can be regarded as subjective, some skyscraper enthusiasts prefer this method of measurement. Standard architectural height measurement, which excludes antennas in building height, is included for comparative purposes.

This lists buildings that are proposed for construction in Chicago and are planned to rise at least 500 feet (152 m). A floor count of 40 stories is used as the cutoff in place of a height of 500 feet (152 m) for buildings whose heights have not yet been released by their developers.


Table entries without text indicate that information regarding building heights, floor counts, and/or dates of completion has not yet been released.

The Masonic Temple, built in 1892, became the tallest in Chicago three years later when the Board of Trade Building had its clock tower removed.