Encyclopedia
This list of tallest buildings in New York City ranks skyscraper
Skyscraper
A skyscraper is a tall, continuously habitable building of many stories, often designed for office and commercial use. There is no official definition or height above which a building may be classified as a skyscraper...
s in that city by height.

Tallest. Subsequent to the destruction of the two primary World Trade Center buildings, the city's tallest building is the 102-story Empire State Building
Empire State Building
The Empire State Building is a 102-story landmark skyscraper and American cultural icon in New York City at the intersection of Fifth Avenue and West 34th Street. It has a roof height of 1,250 feet , and with its antenna spire included, it stands a total of 1,454 ft high. Its name is derived...
in midtown Manhattan
Midtown Manhattan
Midtown Manhattan, or simply Midtown, is an area of Manhattan, New York City home to world-famous commercial zones such as Rockefeller Center, Broadway, and Times Square...
, the basic structure of which, completed in 1931, rises 1,250 feet (381 meters), increased to 1454 feet (443.2 m) by its superstructures. It also is the third-tallest building in the United States and the fifteenth-tallest building in the world, and stood as the tallest building in the world from its completion until 1972.

Next. The second-tallest building is the Bank of America Tower, 1200 feet (366 m) high, including the spire.

The history of skyscrapers in New York City began with the completion of the World Building
New York World Building
The New York World Building was a skyscraper in New York City designed by early skyscraper specialist George Browne Post and built in 1890 to house the now-defunct newspaper, The New York World. It was razed in 1955.-History:...
in 1890; the structure rose 348 feet (106 m). Though not the city's first high-rise, it was the first building to surpass the 284 feet (87 m) spire of Trinity Church
Trinity Church, New York
Trinity Church at 79 Broadway, Lower Manhattan, is a historic, active parish church in the Episcopal Diocese of New York...
. The World Building, which stood as the tallest in the city until 1899, was demolished
Demolition
Demolition is the tearing-down of buildings and other structures, the opposite of construction. Demolition contrasts with deconstruction, which involves taking a building apart while carefully preserving valuable elements for re-use....
in 1955 to allow for the construction of an expanded entrance to the Brooklyn Bridge
Brooklyn Bridge
The Brooklyn Bridge is one of the oldest suspension bridges in the United States. Completed in 1883, it connects the New York City boroughs of Manhattan and Brooklyn by spanning the East River...
.

New York has played a prominent role in the development of the skyscraper; since 1890, eleven structures in the city having held the title of world's tallest building. New York City went through a very early high-rise construction boom that lasted from the early 1910s to the early 1930s, during which 16 of the city's 82 tallest buildings were built—including the Bank of Manhattan Trust Building
40 Wall Street
40 Wall Street is a 70-story skyscraper in New York City. Originally known as the Bank of Manhattan Trust building, and also known as Manhattan Company Building, it was later known by its street address when its founding tenant merged to form the Chase Manhattan Bank and today is known as the...
, the Chrysler Building and the Empire State Building, each of which was the tallest in the world at the time of its completion.

New York skyscrapers are concentrated in Midtown
Midtown Manhattan
Midtown Manhattan, or simply Midtown, is an area of Manhattan, New York City home to world-famous commercial zones such as Rockefeller Center, Broadway, and Times Square...
and Lower Manhattan
Lower Manhattan
Lower Manhattan is the southernmost part of the island of Manhattan, the main island and center of business and government of the City of New York...
, although other neighborhoods of Manhattan and the boroughs
Borough (New York City)
New York City, one of the largest cities in the world, is composed of five boroughs. Each borough now has the same boundaries as the county it is in. County governments were dissolved when the city consolidated in 1898, along with all city, town, and village governments within each county...
of Brooklyn
Brooklyn
Brooklyn is the most populous of New York City's five boroughs, with nearly 2.6 million residents, and the second-largest in area. Since 1896, Brooklyn has had the same boundaries as Kings County, which is now the most populous county in New York State and the second-most densely populated...
, Queens
Queens
Queens is the easternmost of the five boroughs of New York City. The largest borough in area and the second-largest in population, it is coextensive with Queens County, an administrative division of New York state, in the United States....
and The Bronx
The Bronx
The Bronx is the northernmost of the five boroughs of New York City. It is also known as Bronx County, the last of the 62 counties of New York State to be incorporated...
also have significant amounts of high-rises. , the entire city has 216 buildings that rise at least 492 feet (150 m) in height, including those under construction—more than any other city in the United States. , there were 5,912 completed high-rises in the city.

There are over 975,000 buildings in New York City. This list ranks New York City skyscrapers that stand at least 600 feet (183 m) tall, based on standard height measurement. This includes spires and architectural details but does not include antenna masts. An equal sign (=) following a rank indicates the same height between two or more buildings. The "Year" column indicates the year in which a building was completed.
Goldman Sachs
Goldman Sachs
The Goldman Sachs Group, Inc. is an American multinational bulge bracket investment banking and securities firm that engages in global investment banking, securities, investment management, and other financial services primarily with institutional clients...
world headquarters> 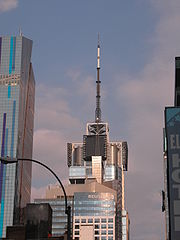 This lists the tallest building in each borough
Borough (New York City)
New York City, one of the largest cities in the world, is composed of five boroughs. Each borough now has the same boundaries as the county it is in. County governments were dissolved when the city consolidated in 1898, along with all city, town, and village governments within each county...
of New York City based on standard height measurement. The "Year" column indicates the year in which a building was completed.

This lists buildings that are currently under construction in New York City, the construction of which has not been cancelled or suspended in any way, and are expected to rise to a height of at least 600 feet (183 m). Buildings under construction that have already been "topped out" are also included. For buildings whose heights have not yet been released by their developers, this table uses a floor count of 50 stories as the cutoff.

This lists buildings that are approved for construction in New York City, have not yet begun, and are expected to rise at least 600 feet (183 m) in height. Buildings whose construction has been halted or suspended are also included.

This lists buildings, expected to rise at least 600 feet (183 m) in height, that have been proposed, but not yet approved, for construction in New York City.


† A blank entry indicates that information has not yet been released about a proposed building's number of floors, its date of completion, or both.

This lists buildings in New York City that were destroyed or are undergoing demolition and at one time stood at least 500 feet (152 m) in height.